With Inflation (Still) at 8.6%, Beat the Inflation Nightmare With These 3 Stocks

Inflation continues to run hot and cast a shadow of uncertainty over the stock market. The latest data from the Bureau of Labor Statistics shows that the consumer price index, a measure for tracking inflation, rose 8.6% year over year in May and 1% compared to April.

With inflationary pressures weighing heavy, finding top investment plays has taken on new degrees of complexity. With that in mind, a panel of Motley Fool contributors has profiled a trio of stocks that still look poised to deliver strong results despite the challenging macroeconomic backdrop. Read on to see why they think NextEra Energy (NEE -1.85%), Ubisoft (UBSFY -2.24%), and Newmont Mining (NEM 3.52%) can deliver wins for your portfolio.

Investing in the energy transition while generating passive income

Daniel Foelber (NextEra Energy): It's tempting to try to fight the forces that are driving markets lower. But long-term investors know that overhauling your investment strategy in response to short-term trends is a great way to miss out on long-term gains.

However, some companies have inflation resistance and long-term upside. NextEra Energy sticks out as one worth considering now.

As a regulated utility, NextEra Energy generates stable cash flows that lay the foundation for long-term investment. NextEra is the largest renewable energy producer in North America. Over the last few decades, it has built a massive portfolio of solar, wind, and energy storage infrastructure. These renewable sources pair well with natural gas, which gives the company a diverse energy mix.

Utilities and energy are the only sectors of the economy that are not down year to date. 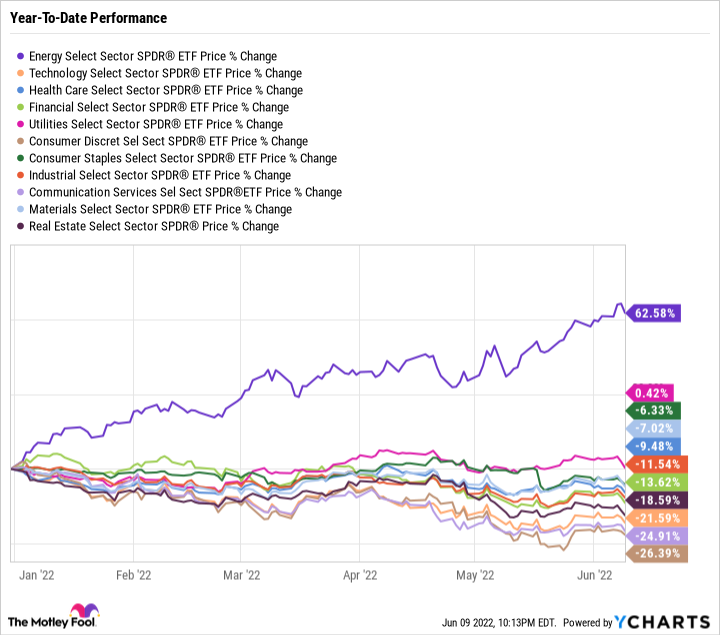 The energy story is largely due to undervalued securities and eight-year high oil and gas prices. But the utility story is textbook -- demand for the services that utilities provide tends to hold steady no matter the market cycle.

Aside from its market-leading position and long-term investments in clean energy, NextEra Energy is also a Dividend Aristocrat. Dividend Aristocrats are SP 500 components that have paid and raised their dividends for at least 25 consecutive years. NextEra has a dividend yield of 2.1% and plans to raise its dividend in lockstep with earnings growth.

NextEra Energy is a great choice for investors looking for long-term upside paired with passive income.

This underrated company is now my largest holding

Keith Noonan (Ubisoft): At the start of the year, Ubisoft occupied a relatively small position in my portfolio. However, I've reduced positions in other companies and shifted the resulting funds into the video game publisher's stock. It now stands as my single largest holding -- and by a wide margin.

The France-based publisher is known for successful franchises including Assassin's Creed, Rainbow Six, Ghost Recon, and Just Dance, but it admittedly hasn't been putting up great business performance lately. Like most companies, Ubisoft also won't be completely immune to inflationary pressures.

While the company generated more than three-quarters of its bookings from digital sales last year, it's likely the business will see some cost increases related to producing and distributing games. With gaming companies competing to attract and retain top industry talent, and inflation leading to cost-of-living increases, it's also reasonable to expect that Ubisoft will face rising workforce costs.

On the other hand, there are a number of factors that lead me to believe that Ubisoft will perform well in the current stock market climate. For one, the company already looks quite cheaply valued. With a market capitalization of roughly $6 billion, Ubisoft is valued at less than 2.7 times last year's revenue and about 14 times management's estimated operating-income target for this year.

These are non-prohibitive multiples for a company with plenty of rebound potential in a promising industry. However, there's another big reason I'm bullish on the company right now.

Consolidation has been all the rage in the gaming industry lately, and I think there's a good chance that Ubisoft will be acquired within the next couple years at a significant premium. Investment firms have reportedly been looking into purchasing the company outright or partnering with its found family (and largest shareholders) to buy up stock and take the company private. It's also possible that large, public gaming companies including Sony, Microsoft, and Tencent could make a move.

With acquisition interest likely creating a pricing floor (and potentially explosive upside) for the stock, and the company guiding for a return to significant sales growth this year, this gaming player looks well suited for the current moment. In this tough market, I like that Ubisoft offers multiple ways to win.

A cliche for all the right reasons

James Brumley (Newmont Mining): I'm typically not a fan of stepping into the obvious, cliched stocks in response to a specific-but-unusual situation. These trades are often crowded, and the crowd can be fickle, changing its mind at the drop of a hat.

In this instance, though, I'm going with the obvious pick of gold miner Newmont Mining.

This pick checks off a couple of important boxes. Chief among them is the fact that gold is arguably the planet's most preferred inflation hedge. The other key characteristic of Newmont that makes it a worthy holding here is that it pays a dividend. Investment income means so much more when the buying power of a dollar is deteriorating. Its current yield is a solid 3.3%.

It's not a completely risk-free pick, mind you. Rampant inflation is causing the cost of mining gold to soar for Newmont. So, the company can't simply take on more exploration or mine-development projects. It has to proceed prudently, and cost-efficiently. This headwind is a key reason the stock's been a surprisingly poor performer since April, even though inflation was firm then. Gold prices were also peeling back from a near-record at that time, prompting some second thoughts about Newmont's huge rally earlier in the year.

This pullback, however, is ultimately a buying opportunity. Strong inflation could be here for a while, and it may even get worse before it gets better.