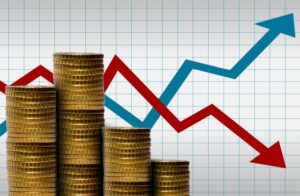 I suppose when you’re coming down off of a global pandemic and an ill-conceived attempt to overthrow your country’s government , and moving from that right on into a new war with Russia and schoolchildren getting massacred in their classrooms for no damn reason at all , you’re going to be a little ill at ease.

I think our crumbling institutions and the general sense of anxiety rippling through society has a lot to do with how people believe we’re doing economically. The economy hasn’t been in bad shape so far this year . Joblessness is the lowest it’s been in more than half a century, wages are up, and corporate earnings are robust. Still, people are not very optimistic.

This same poll found that only 20 percent of Americans believe the economy is improving. More than three-fourths of respondents to this Gallup poll said the economy is getting worse.

But the pessimistic majority is wrong, at least if new estimates from our national nonpartisan number crunchers at the Congressional Budget Office are to be believed. In a new report released on May 25, the CBO predicted that real gross domestic product will grow by 3.1 percent for 2022 — not a bumper GDP growth rate by historical standards, but at least a respectable one. With this latest report, the CBO also revised upward its long-term GDP growth estimates for 2023 and 2024.

The good news extends beyond just the growth rate of the overall economy. The CBO found that inflation has topped out. We’ll hit 4.7 percent inflation for 2022 according to the CBO (measured by the Consumer Price Index), but inflation is already dropping from highs hit this spring. Inflation is set to fall further to 2.7 percent by 2023, and to 2.3 percent by 2024. These numbers would put inflation just slightly above the Fed’s 2 percent target within two years.

Furthermore, the CBO report could have good implications for the stock market. Stocks have taken a beating in the past few months. However, stock prices have been falling based more on what analysts think the economy might do than on what the economy actually has been doing in the present tense. Some of the assumptions baked into the stock market could be wrong.

The CBO predicts that the Fed, in its inflation fighting efforts, will raise its benchmark overnight interest rate to 1.9 percent by the end of this year. That is significantly below the dominant expectation in the market of a figure higher than 2.5 percent.

Pretty much any way you look at them, the new CBO figures point to brighter days ahead for the U.S. economy . Of course, a lot of things could go wrong, our own attitudes among them. Unfortunately for us, great numbers of us simply believing inflation will go up can actually cause inflation to go up.

We’ve been in a weird place for a long time on the economy. Other than higher-than-normal inflation, the numbers really have not been looking bad for quite some time. Now, the new CBO report indicates that even the biggest economic concern of late, inflation, has reached its peak. Turns out that how people feel isn’t always based on what the truth actually is.

Maybe as inflation eases people will find their economic optimism once again. Or maybe not. I don’t think most Americans are paying as much attention to CBO reports as anyone reading this is. My money is on people feeling like the economy is doing better when they are just feeling better period.

Jonathan Wolf is a civil litigator and author of  Your Debt-Free JD  (affiliate link). He has taught legal writing, written for a wide variety of publications, and made it both his business and his pleasure to be financially and scientifically literate. Any views he expresses are probably pure gold, but are nonetheless solely his own and should not be attributed to any organization with which he is affiliated. He wouldn’t want to share the credit anyway. He can be reached at  jon_wolf@hotmail.com .