What can the Westpac results tell us about the outlook for ASX 200 bank shares?

Following the release of its first-quarter update today, shares in Westpac Banking Corp (ASX: WBC) snaked higher to finish 2.28% in the green at $21.07.

That’s a fairly robust outcome for what was by all intentions supposed to be considered a fairly rudimentary and underwhelming update for the three months.

However, the market paid for what Westpac had to offer in its update today, which has us wondering – what do the bank’s results say about the outlook for ASX 200 bank shares this year?

Naturally, a flurry of broker updates has come through in response to Westpac’s earnings. However, all the banking majors are getting a mention today. Let’s take a closer look.

What’s in store for ASX 200 banks after Westpac’s results?

Speaking on Westpac’s results, the team at Citi chimed in with a relatively positive note.

The broker reckons investors might see Westpac’s Q1 earnings with an upbeat mentality. Particularly seeing as Westpac has a good opportunity to reduce its cost base.

For instance, Citi noted that Westpac had cash earnings of almost $1.6 billion for the quarter, a 1% year-on-year gain on the average for the entire 2H FY21. Not only that, it was 13% ahead of Citi’s estimates at the lower range.

Much of the talk this year with ASX 200 bank shares has been the foreseeable challenges to net interest margins (NIMs) this year, with the consensus baking in a reduction to NIMs across the board in 2022.

However, Westpac’s NIMs were largely in line with the broker’s estimates. The bank’s reduction cost base also adds some weight to its commitment to reducing its cost base to $8 billion in the next 2 years.

UBS on the other hand wasn’t as rosy, saying the bank’s NIMs were a tad “disappointing” in its update to clients today. The Swiss investment bank was underwhelmed by this result but encouraged by Westpac’s commitment to reducing its cost base in FY24.

This was backed by Westpac’s actual performance during the quarter, in reducing those costs by a meaningful degree.

“ The Q1 22 update today, in our view, confirms management’s absolute commitment to deliver this [reduction]” the broker said.

“This is something the market has not factored in based on our analysis”. 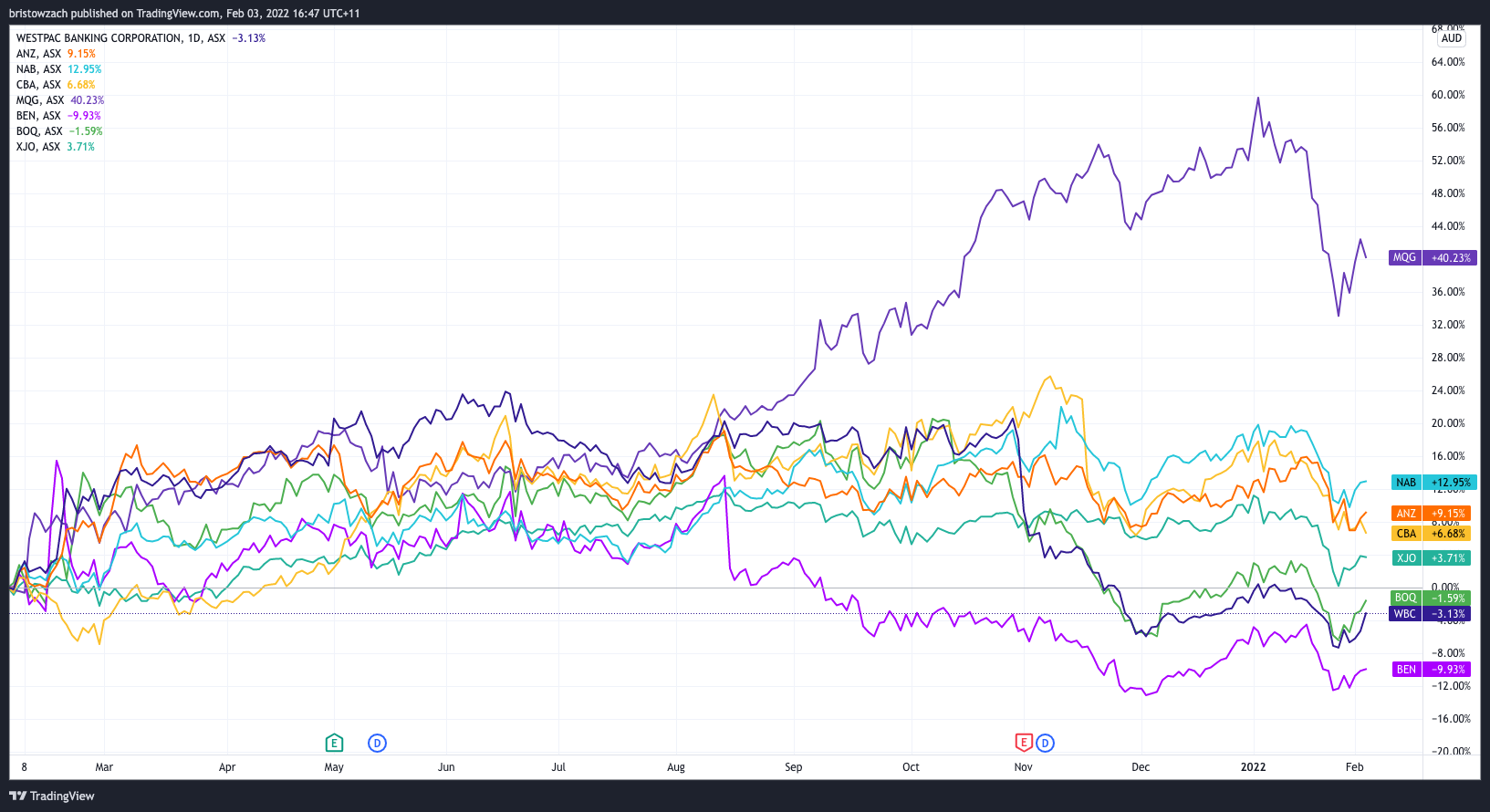 Meanwhile, skipping over to Commonwealth Bank of Australia (ASX: CBA), Morgan Stanley chimed in with a note following Westpac’s earnings results. Here the broker reckons Australia’s largest bank could see its revenue drop by around 2% compared to the previous half.

It baked in margin pressures, lower fees, and higher insurance claims to offset growth of its interest-earning assets in its downside scenario.

The broker provided its insights on the shifting interest rates cycle, price competition, and the current state of the mortgage market.

It reckons CBA will maintain a healthy CET-1 ratio of 11–11.5%. However, it thinks this won’t be approved for another share repurchase scheme.

In direct contrast, researchers at UBS reckon CBA is a gold standard pick when it comes to investing in ASX bank shares, using Westpac’s results as a benchmark.

The firm values CBA’s brand and franchise at high esteem – higher than any other bank – especially given its size, earnings power, and technology integration in operations.

Still, UBS initiated coverage on CBA with a neutral rating, valuing the company at $95 per share in the process.

It is forecasting CBA’s NIMs to bottom at 1.98% and then subtly increase over time to reach 2.15% as nominal interest rates begin to rise.

What else was said?

Macquarie also updated the market with its outlook for ASX 200 bank shares today, noting there is potential for majors to face downside risk to their earnings in the first half of FY22.

Analysts at Macquarie reckon lower markets income poses a direct threat to bank earnings this season. It noted that Australia and New Zealand Banking Group Ltd (ASX: ANZ) in particular faces $100–$200 million in potential loss to its markets income. Sector-wide, it estimates a 7% reduction in markets income compared to FY19.

The broker also wound back its forecasts on National Australia Bank Ltd (ASX: NAB)’s markets income for FY22 after it came in with a weak set of results at the last reporting season. Nonetheless, it sees more risk in ANZ than it does for its counterpart.

“On a relative basis, we see a bigger risk to ANZ and a smaller risk to NAB, which has already seen a substantial rebasing in its trading income,” the firm said.

UBS is also cautious on ANZ’s outlook following the release of Westpac’s results today. It says the market is pricing in a low chance of success to turn its mortgage business around.

The broker notes that ANZ has likely wiped $6 billion of market cap off its value following a series of poor performances in this segment.

“While management highlighted expectations for the home loan portfolio to return to growth in 1H FY 2022, so far this does not appear to be the case, with ANZ losing a further 20 basis points of total home loan share to November 2021,” it said in a separate note today.

However, UBS initiated coverage on ANZ with a buy rating and values the company at $30 per share, signifying around $3 of upside protection at the time of writing.

All in all, sentiment appears mixed on the sector heading through the early stages of 2022.