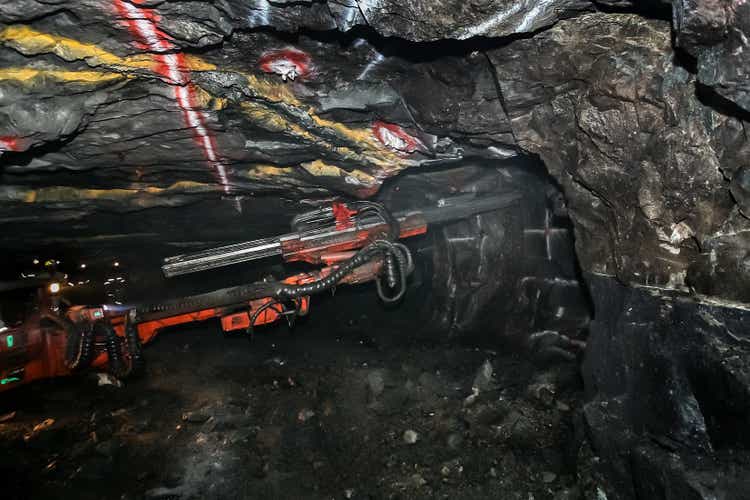 The Q1 Earnings Season was a difficult one for the Gold Miners Index (GDX), and while Wesdome (OTCQX:WDOFF) came into the year with a 2nd mine in production, it wasn't immune from the sector-wide headwinds. In fact, one-third of its total workforce was impacted by Omicron, while supply chain issues hurt Kiena's performance, leading to sub-par Q1 results. Although this impacted FY22 guidance, the company has a strong H2 ahead, with the issues largely in the rear-view mirror. Given Wesdome's industry-leading growth profile, I would expect further weakness to present a buying opportunity. 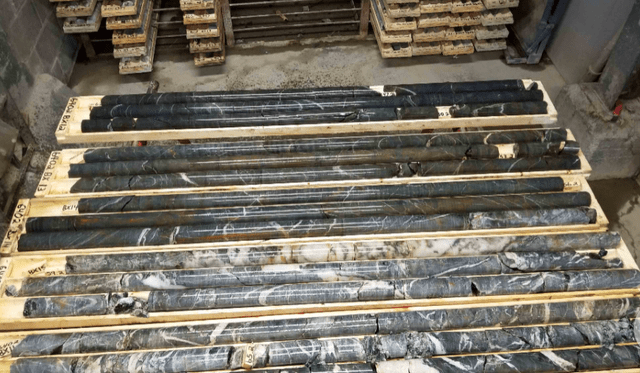 Just over two months ago, I wrote on Wesdome, noting that while the company had one of the best growth profiles sector-wide, the stock was getting a little ahead of itself short-term. This is because it was trading a P/NAV multiple north of 1.30x, leaving little room for further multiple expansion and making it more vulnerable to any gold price weakness. Since then, the stock has slid just over 20%, attributed to a softer Q1 and a sharp retreat in the gold price. Let's take a closer look at the Q1 results and the valuation below:

Wesdome Gold Mines released its Q1 results last month, reporting quarterly gold production of ~25,600 ounces, a 13% increase from the year-ago period but a 32% decline on a sequential basis. This was partially related to lower head grades and throughput at the company's Eagle River, where grades dipped from 13.7 grams per tonne of gold to 11.6 grams per tonne of gold. However, the major culprit for the weaker performance was Kiena, which saw gold production of just ~5,100 ounces in Q1 2022, down from ~16,900 ounces in Q4 2021.

In addition to Omicron, which significantly impacted workforce availability, the lower production at Eagle River was related to much lower grades in the first half of the year vs. the annual guidance of 12.1-13.4 grams per tonne of gold. At Kiena, Q1 production was impacted by unscheduled downtime of the underground crusher, further exacerbated by the later-than-expected delivery of underground mobile equipment. Not surprisingly, this severely impacted grades and throughput in the period, with Kiena processing just ~21,200 tonnes at 7.7 grams per tonne of gold, down from ~38,000 tonnes at 14.1 grams per tonne gold in the most recent quarter.

The good news is that the crusher is now back in commission, and the mobile equipment arrived on-site at the end of Q1. In addition, the company is working towards completing the paste-fill plant, which is forecasted to be operational by Q3 (slightly behind schedule), which will dramatically improve cycle times on stopes. Meanwhile, at Eagle River, grades are expected to improve considerably as the year progresses, helping the asset return to a 21,500+ ounce per quarter production rate. While this will lead to a significant improvement in quarterly results from both assets, a guidance beat appears to be off the table, with annual production expected to come in at the lower end of the guided range (160,000 to 180,000 ounces).

Given the much weaker production results, it's no surprise that costs increased considerably, with Wesdome reporting all-in sustaining costs of $1,399/oz at Eagle River and $1,339/oz on a consolidated basis. While these costs were up 18% year-over-year (Q1 2021: $1,182/oz), costs are expected to improve considerably throughout the year and should settle below the $1,110/oz level on a full-year basis. So, while this cost performance might be quite disappointing for two assets with industry-leading grades, it's important to note that this is largely due to the weak sales performance, which is not representative of what these assets are capable of from a margin standpoint. 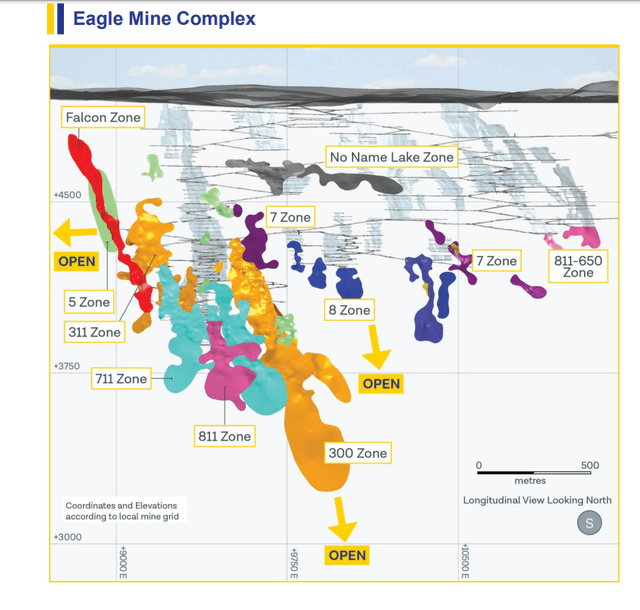 These intercepts were drilled in the Falcon 7 Zone, a key development given that it reaffirms the potential for volcanic rocks to be home to sizeable deposits of gold mineralization. This could provide an opportunity to make additional discoveries in volcanic rocks outside the existing Eagle River Mine footprint, with the quartz diorite stock historically being the most favorable host rock observed to date. Therefore, the presence of high grades in volcanic rocks is a big deal for this asset from a prospectivity standpoint. It also helps that the Falcon 7 Zone lies away from the main mining area at depth, allowing for a separate work area vs. being congested in the main zone. 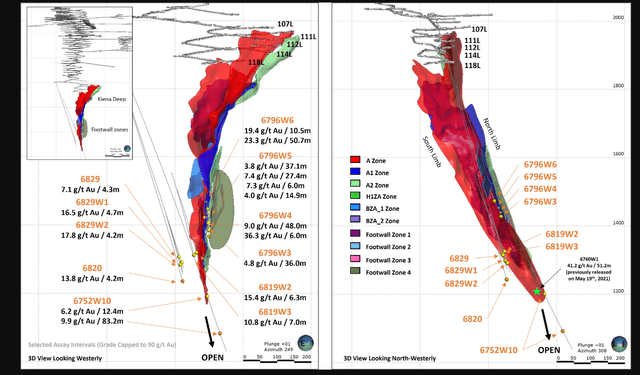 Not only does this suggest a very high probability of resource growth in what's already shaping up to be one of the top-3 highest-grade gold mines globally, but it also suggests that the reserve grade at Kiena might end up being on the conservative side. This is because we've seen many intercepts come in at or above the current reserve grade and over solid mining widths. To summarize, while Kiena's estimated After-Tax NPV (5%) may sit at ~$600 million currently, there's the potential for this to increase to $750+ million as economics improve with more ounces per vertical meters and significantly more ounces moved into the mine plan.

Finally, in a move to add significant operational experience to the team, Wesdome has appointed Frederic Mercier-Langevin to the position of Chief Operating Officer as of last week. Mr. Langevin was General Manager of the Goldex and Lapa Mines in Quebec under Agnico Eagle (AEM), and he was most recently the GM of the ~300,000+ ounce Meliadine Mine in Nunavut. This is an excellent addition to the team, with nearly 20 years of operational experience at arguably a top-3 gold miner.

Based on ~144 million fully diluted shares and a share price of US$9.90, Wesdome trades at a market cap of ~$1.43 billion. This leaves the stock trading at a P/NAV multiple of ~1.15x, based on an estimated net asset value of $1.02 billion for Kiena and Eagle River and $250 million in exploration upside. I would argue that this is a more than reasonable valuation for Wesdome, and the stock could easily command a P/NAV multiple of 1.40, given that it has very similar attributes to Kirkland Lake Gold in its period of significant outperformance (2016-2019).

The above comparison and a premium multiple to its peer group are based on the fact that Wesdome is one of only a handful of producers that checks the boxes for the following:

Following the recent 23% pullback, Wesdome looks undervalued, with more than 20% upside to fair value. However, while the stock is attractive from a valuation standpoint, it doesn't quite meet my criteria for a low-risk buy just yet. This is because even after its share-price decline, the stock is still near the middle of its trading range, with support at US$8.00, and strong resistance at US$12.75. From a current share price of US$9.90, this translates to US$1.90 in potential downside to support and US$2.85 in potential upside to resistance (reward/risk ratio of 1.5 to 1.0). 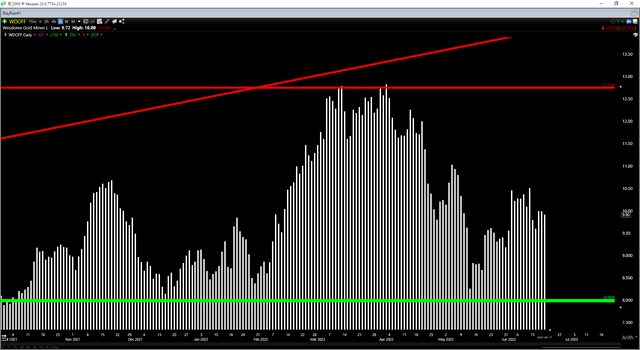 When it comes to small-cap producers, I prefer to only start new positions with a 5.0 to 1.0 reward/risk ratio or better, and Wesdome doesn't come clear to meeting these criteria just yet, even if it is a top-12 producer. Having said that, if the stock were to dip below US$8.80, where its reward/risk ratio would improve considerably, this would offer a low-risk buy point. Obviously, there's no guarantee that the stock heads this low, and waiting could lead to a missed opportunity. However, I don't see any need to pay up for stocks in a turbulent market environment, so I remain on the sidelines for now. 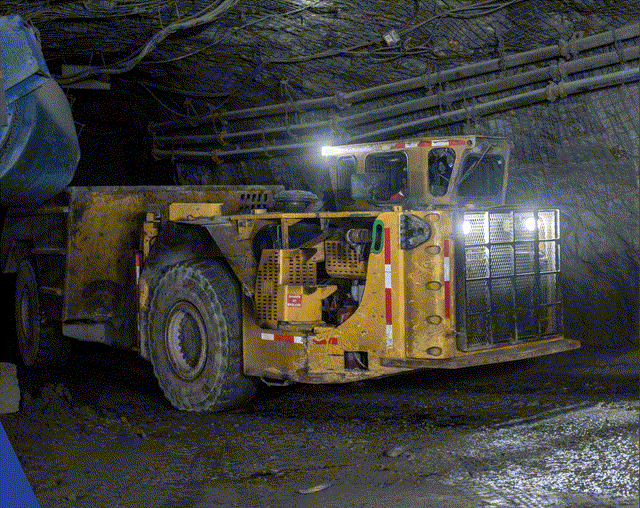 For investors anxious to increase their precious metals exposure and looking for producers that are investable in a rising cost environment, Wesdome is one of the best options available. It has very low jurisdictional risk, offers industry-leading organic growth, and has a path to much higher margins while most of the sector struggles to hold the line due to inflationary pressures. Finally, it's one of the best exploration stories sector-wide, with the current reserve base and grades understating the true potential of both its assets. Therefore, if we were to see Wesdome pullback below US$8.80, I would view this as a low-risk buying opportunity.

"A bull market is when you check your stocks every day to see how much they went up. A bear market is when you don't bother to look anymore."- John Hammerslough - Disclosure: I am not a financial advisor. All articles are my opinion - they are not suggestions to buy or sell any securities. Perform your own due diligence and consult a financial professional before trading or investing.

Disclosure: I/we have a beneficial long position in the shares of GLD, AEM either through stock ownership, options, or other derivatives. I wrote this article myself, and it expresses my own opinions. I am not receiving compensation for it (other than from Seeking Alpha). I have no business relationship with any company whose stock is mentioned in this article.

Additional disclosure: Disclaimer: Taylor Dart is not a Registered Investment Advisor or Financial Planner. This writing is for informational purposes only. It does not constitute an offer to sell, a solicitation to buy, or a recommendation regarding any securities transaction. The information contained in this writing should not be construed as financial or investment advice on any subject matter. Taylor Dart expressly disclaims all liability in respect to actions taken based on any or all of the information on this writing. Given the volatility in the precious metals sector, position sizing is critical, so when buying small-cap precious metals stocks, position sizes should be limited to 5% or less of one's portfolio.