The Black Phone Review: Ethan Hawke at His Most Evil 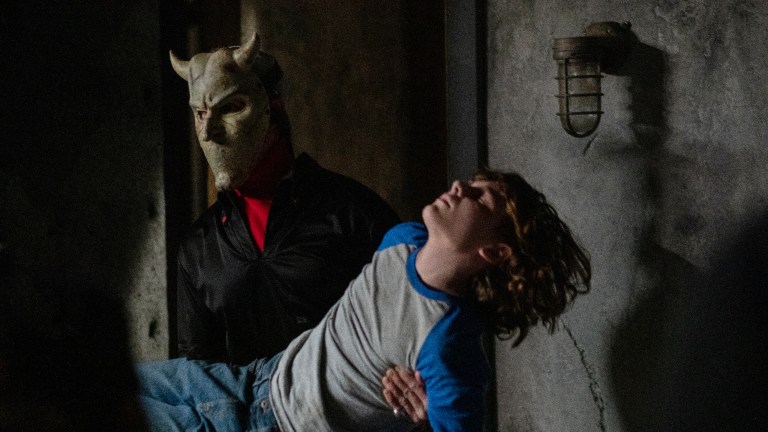 After a few years toiling away in the Marvel Cinematic Universe where he directed and co-wrote 2016’s Doctor Strange before leaving the sequel, director Scott Derrickson is back where he belongs. The purveyor of two of the best horror films of the past 20 years—2005’s The Exorcism of Emily Rose and 2012’s Sinister —Derrickson is again in his genre element with The Black Phone .

He’s also put his preferred team back together too, as The Black Phone reunites Derrickson with Sinister co-writer C. Robert Cargill, as well as that picture’s star, Ethan Hawke. Also coming off the bench for this one is famed author Joe Hill, whose short story of the same name (from his 2005 debut collection, 20th Century Ghosts ) is the basis of this sharply focused, frightening, and ultimately moving thriller.

Set in 1978 in a Denver suburb, The Black Phone thrusts us right into the climate of paranoia that arose during that era as the result of a string of serial killers and child murders that made headlines, from the Hillside Strangler to the Zodiac Killer, and from the Son of Sam to John Wayne Gacy. The town in The Black Phone is held in the grip of the Grabber, who has abducted five young boys in the area, with telephone poles and storefronts dotted with the all-too-familiar flyers of missing children that haunt us to this day.

We soon meet 13-year-old Finney (Mason Thames in an outstanding film debut) and his younger sister Gwen (Madeleine McGraw), who live at home with their widowed, abusive father (Jeremy Davies) but who have a loving, protective relationship with each other. Finney has it tough outside the home: He’s bullied by other kids, he doesn’t know how to talk to the girl he’s crushing on, and he’s socially awkward in general. It’s only a matter of time before he’s captured by the Grabber, a twisted, malevolent figure in a mask (Ethan Hawke) who dispenses quickly with false reassurances that everything will be all right. Finney knows his fate.

That is until a disconnected black rotary phone on the wall of the dank basement in which the Grabber has imprisoned Finney begins to ring. The boy picks it up, only to begin receiving calls from the Grabber’s previous victims, calls that may hold the key to Finney’s only chance at escape.

Like Sinister , The Black Phone is a slow burn that gradually escalates the tension once Finney is in the hands of Hawke’s genuinely unsettling Grabber. This is also a movie that acutely savors its period details, although not in a self-conscious way that’s drenched in nostalgia like Stranger Things . Rather The Black Phone organically weaves its ‘70s references to Happy Days and the Edgar Winter Group. And, more importantly, it hones in on the development of Finney, his younger sister Gwen, and their daily lives, creating that all-important empathy so essential to a film like this once the horror becomes almost unrelenting.

It also helps that Derrickson and Cargill have a natural feel for what it was like to be a kid during the ’70s, and that like Hill (and his dad Stephen King) they know how to write the kids in this film. Of course it wouldn’t work if the kids weren’t so damn good: Thames’ Finney is bullied by other kids at school but is not about to let it drag him all the way down. Meanwhile McGraw’s sassy, foul-mouthed Gwen is a fiercely courageous warrior, determined to speak her truth at all costs as she frantically does everything she can to find her brother.

Then there is Hawke, playing the first truly evil character in his career, and bringing to it the kind of nuance and complexity that is a staple of his work. We never find out much about Grabber, including his real name; we simply know he used to be a magician and kidnaps his victims in the same black van that he traveled in to his bookings. He hides his face behind a demonic mask that he can remove partially or switch out sections of, which makes it somehow even creepier than if he never removed it at all. Hawke walks the line between portraying utter soullessness and giving us glimpses of the shattered person underneath the Grabber persona, keeping him intriguing but never over-explaining his vile nature.

While these three performances anchor the film, a couple of others fall short: Jeremy Davies as Finney and Gwen’s dad is too one-dimensional and exaggerated as a character who doesn’t necessarily deserve sympathy (he uses corporeal punishment in his kids for one thing, still accepted in the ‘70s), but who comes across as almost too unstable to be walking free himself.

Elsewhere James Ransone, another Derrickson holdover from Sinister , is recruited by the director to provide comic relief as a local conspiracy theorist who’s fascinated with the Grabber. His scenes are tonally jarring, however, and the payoff for his character simply doesn’t work in this context. But other than that, and a few other moments where you can feel the filmmakers stretching the material out to make a 26-page story into a 90-minute film, The Black Phone is an effective, frequently terrifying, and eventually poignant horror outing. The relationship between Gwen and Finney is the solid gold heart of the story, genuinely investing us in their fates and delivering satisfying character development for both.

Setting the story in a Denver suburb allows Derrickson, who spent his childhood in northern Denver, to make the film feel especially personal, and the production, costume, and sound design, by Patti Podesta, Amy Andrews, and Paul Hackner and D. Chris Smith respectively, paint an accurate picture of life in that era. Kudos also to cinematographer Brett Jutkiewicz, who fashions a softer, slightly faded imagery appropriate to the era without going for the overly grainy or washed-out look that is meant to scream “1970s horror.”

The Black Phone is set in the ’70s, but it’s not self-consciously trying to be a ‘70s horror movie. Yet its themes and atmosphere do reflect that era: a time when child abductions and serial killers became some of America’s darkest myths, when paranoia and mistrust were rampant, and when kids were allowed a lot more leeway and freedom in their lives, sometimes with sorrowful results. Yet it’s not a nihilistic film either. What is broken may not be easily put back together, if at all, but the characters in The Black Phone do their best to try.

The Black Phone is out in theaters this Friday, June 24.