The first day of February trading was a relative yawner as the three major indexes finished Tuesday with modest gains. But given that investors just suffered the worst month for stocks since the COVID bear market, they were likely grateful for a quiet, positive session.

If not, they received something a little more exciting in the form of an Alphabet (GOOGL, +1.7%) stock split.

Earlier Tuesday, the Institute for Supply Management announced that its January manufacturing index declined by 1.1 points to 57.6. (Readings over 50.0 indicate expansion.) That was in line with expectations and showed continuing growth in the manufacturing sector, albeit at a slower pace than in December.

"The composition of the report was soft, with a small increase in the employment component, but larger declines in the production and new orders components," says Goldman Sachs Economics Research.

The earnings calendar had a few events of note, too.

Sign up for Kiplinger's FREE Investing Weekly e-letter for stock, ETF and mutual fund recommendations, and other investing advice.

After the bell, Google parent Alphabet surged another 7% or so after announcing a massive quarterly beat and an equally sizable stock split. GOOGL reported 32% year-over-year revenue growth to a record $75.3 billion to easily beat estimates of $72.3 billion. Meanwhile, earnings of $30.69 per share easily cleared consensus expectations for $27.34.

The company also said its board of directors had approved a 20-for-1 stock split on each share of Class A, Class B and Class C stock. Shareholders still must approve the measure. If passed, shareholders of record as of the July 1, 2022, close, would receive on July 15, 2022, a dividend of 19 additional shares of the same class of stock for each share they held.

Other news in the stock market today:

The 'January Barometer' Bodes Poorly for Equities, But ...

January performance isn't the market indicator it used to be. 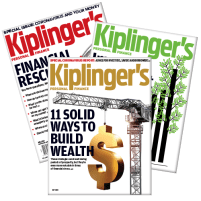 Be a smarter, better informed investor.

Traders sum it up like this: "As January goes, so goes the year."

The good news? "It is worth noting that the January Barometer has been broken lately," Detrick says. "In fact, nine of the past 10 times stocks were lower in January, the final 11 months were higher, with some huge gains in there."

The takeaway? Although hoary market sayings and historical indicators can be entertaining and occasionally useful, past performance – as always – is not indicative of future returns.

The wisest move most investors can make is to build a strong portfolio core tailored to their risk tolerances and goals. Vanguard is among a few fund providers that can help you prepare for just about any eventuality, for a song.

To that end, we've focused on handling 2022's specific challenges – inflation, rising interest rates – in our list of 2022's best Vanguard funds. These stock- and bond-funds are constructed to both benefit from and defend against many of this year's trends.