U.S. stock futures fell on Wednesday as the major averages looked to give back gains after rising for back-to-back sessions.

Contracts on the SP 500 fell by about 0.5% in early trading. Futures on the Dow Jones Industrial Average and Nasdaq were off by about the same margin. All three major averages had kicked off this week with gains, rising on both Monday and Tuesday.

West Texas intermediate crude oil prices (CL=F) rose above $120 per barrel and reached the highest level since March, and the benchmark U.S. 10-year Treasury yield resumed its climb above 3%. Shares of Target (TGT) headed for a third straight day of losses after the retailer issued another guidance cut and projected more discounts to move through inventory. Meanwhile, Novavax (NVAX) shares soared after the pharmaceutical company won backing from the Food and Drug Administration for its COVID-19 vaccine.

Despite the early-week advances, the major U.S. stock indexes have remained overall choppy as investors weighed individual company warnings on inflation and the macroeconomic backdrop against policymakers' efforts to bring down elevated prices. The Federal Reserve remains in a quiet period ahead of its forthcoming policy-setting meeting next week, which is overwhelmingly expected to set the stage for the central bank to roll out a second 50 basis-point interest rate hike.

And other policymakers also reaffirmed that cooling red-hot inflation pressures remains a key priority. U.S. Treasury Secretary Janet Yellen told senators on Tuesday that she expected inflation to remain high and reaffirmed that she saw price increases as being driven by Russia's war in Ukraine, the pandemic-era shift to goods purchases, and ongoing supply chain issues.

"Watching the market ... as it teeters between inching ahead and pulling back, suggests that until there's a more definitive reading on the inflation front coupled with the Fed's thinking on further rate hikes in September, we can expect this bounce back and forth," Quincy Krosby, chief equity strategist for LPL Financial, said in an email.

"Given the uncertainty the market has to discount, and not the least how corporate earnings will fare as the economy slows further, having a market that wobbles a bit before it makes up its mind is probably the healthiest course, at least for now," Krosby added.

The Bureau of Labor Statistics is poised to release its latest Consumer Price Index on Friday, which is expected to show inflation eased only marginally in May from April's elevated 8.3% rate. Consensus economists are looking for headline inflation to rise at a 8.2% annual rate for May, and by 5.9% excluding food and energy prices.

Here's where markets were trading before the opening bell Wednesday morning:

The Mortgage Bankers Association's weekly market composite index trading mortgage loan application volume sank 6.5% during the period ending June 3. This represented a fourth consecutive weekly decline and extended a 2.3% drop from the prior week. Refinance applications fell 6% week-on-week and by 75% compared to the same time last year. Purchases, meanwhile, fell 7% from the prior week, and on a seasonally unadjusted basis, were lower by 21% compared to last year.

“Weakness in both purchase and refinance applications pushed the market index down to its lowest level in 22 years. The 30-year fixed rate increased to 5.4% after three consecutive declines. While rates were still lower than they were four weeks ago, they remained high enough to still suppress refinance activity," Joel Kan, MBA’s associate vice president of economic and industry forecasting, said in a press statement.

“The purchase market has suffered from persistently low housing inventory and the jump in mortgage rates over the past two months," Kan added. "These worsening affordability challenges have been particularly hard on prospective first-time buyers.” 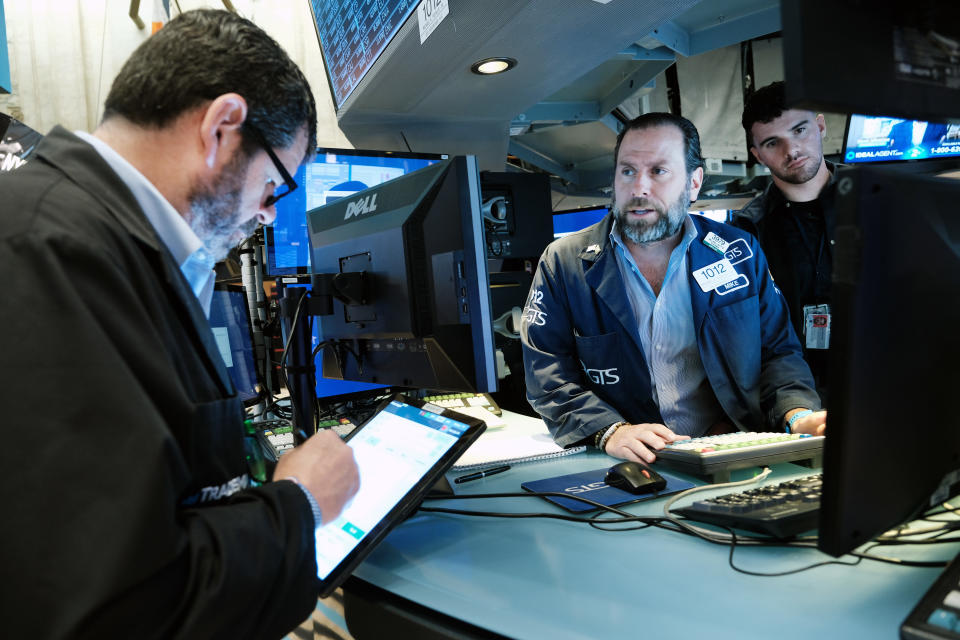 NEW YORK, NEW YORK - JUNE 03: Traders work on the floor of the New York Stock Exchange (NYSE) at the start of the trading day on June 03, 2022 in New York City. A new jobs report released by the Labor Department this morning shows employers added 390,000 jobs in May. Stocks pointed lower ahead of the opening bell on Friday, putting indexes back into the red for the week. (Photo by Spencer Platt/Getty Images)

Read the latest financial and business news from Yahoo Finance