STAG Industrial: Our Favorite REIT Is Back On Sale 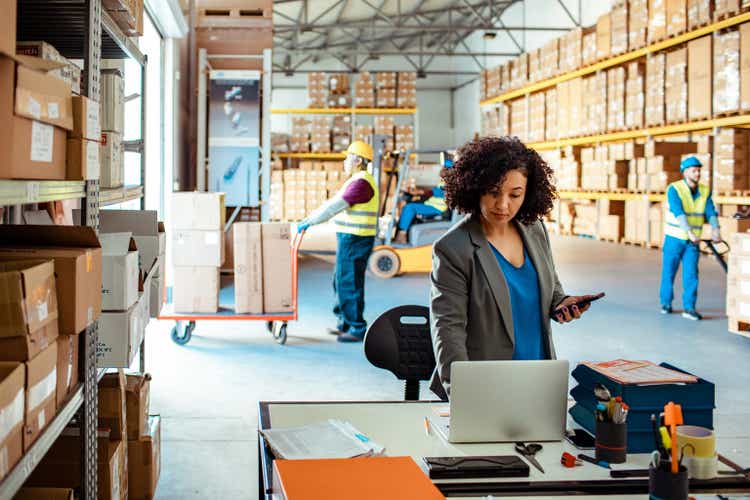 There are many attractive companies and business models in the REIT space, but none have we grown more fond of than STAG Industrial (NYSE:STAG ). The company is a top-quality, highly diversified pure-play industrial REIT that carries a rock-solid balance sheet and offers a secure 4.74% dividend yield to potential investors. We have already had a chance to cover the REIT back in our December article under the title: "STAG Industrial: Valuations Have Caught Up" , where we expressed our admiration for the high-quality business model, but also our dissatisfaction with what we considered the slightly too high of a price that the same business was selling for.

However, the recent market downturn triggered a sell-off in the REIT space as well, bringing down the price of our favorite REIT to much more attractive valuations. At these prices, STAG Industrial seems to be undervalued both compared to the industrial REIT sector and the broader market. The business model which is defensive in nature allows both for immediately accessible shareholder returns during the bear market but also carries significant upside potential that can be unlocked once the recession is behind us.

Back to the drawing board

With one of the greatest bull runs in stock market history drawing to an end, generating positive returns is going to become a much more difficult task in the years to come. The days when the even most basic index strategies yielded double-digit stock market returns seem to be behind us.

As a result of the increasingly negative macroeconomic environment, many investors find themselves pulling their money out of stocks and moving into what is generally perceived as safer havens, something like bonds, gold, silver, or simply good old cash. However, we find ourselves fundamentally disagreeing with this approach to investing. In our view, recession-like environments such as these generate once-in-a-decade opportunities to acquire top-class companies for the best prices.

That is exactly the attitude we have towards STAG Industrial. Prior to the sell-off, the company was successful in generating a 14% CAGR since its listing back in 2011, excluding dividends. Today, after the recent drop from the all-time high, that number is set at 8.1%. If we are to take dividends into consideration, we can clearly see that the REIT is consistent in outperforming the market.

Furthermore, REITs in general have one unique attractive feature that is going to possibly allow them to generate alpha on the market even in times of market downturns, and those are immediately accessible shareholder returns. By definition, in order to qualify as REITs and enjoy the special tax treatment, they must pay out at least 90% of their net earnings to shareholders through dividends.

The reality of things is that we simply do not know if the bear market is going to last a year or a decade. The greatest bull market in history might as well be followed by the worst bear market in history, in the end, nobody knows for certain. Historical precedent tells us that we are most likely going for a 2-3 year-long ride, with us already in the 163rd day of the current bear market.

So the value proposition here is rather simple, acquire positions in a top-quality REIT at a very attractive price that also guarantees an almost 5% dividend yield. Enjoy the monthly dividends, and down cost average if the market continues to act irrationally. And ultimately, enjoy the upside moment once everything ends.

One of the more interesting things about STAG Industrial is that it always seems to be somewhat undervalued when compared to its Industrial REIT peers. That has remained true even during the sell-off, as the REIT is trading at an obvious discount to the rest of the competitors such as Prologis (PLD), Duke Realty (DRE), Rexford Industrial (REXR), Americold Realty (COLD), First Industrial (FR), Terreno Realty (TRNO) and others.

The REIT is currently selling for 13.96x NTM P/FFO and 15.60x P/AFFO while offering a 4.72% yield with a 69.46% FFO payout, which makes it by far the most attractive industrial REIT besides Innovative Industrial (IIPR), which is another interesting REIT which we will hopefully cover in the future. Currently, it even seems to be trading at a more attractive valuation when compared to a retail REIT such as Realty Income (O) which is currently selling for 15.82x FFO per share, or a diversified REIT such as W. P. Carey (WPC) which is selling at 15.64x FFO per share, both attractive valuations. 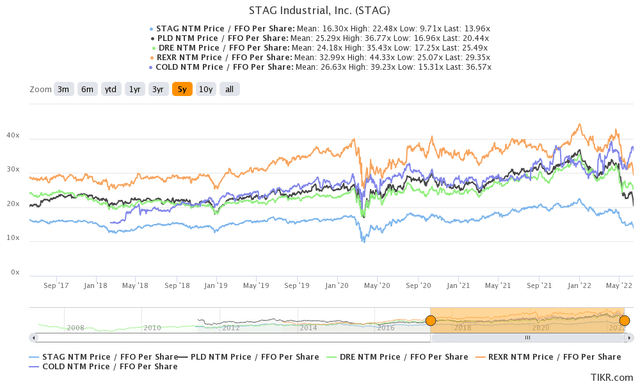 Looking back at the historical charts, we can conclude that STAG Industrial trading at a discount to the rest of the competitors in the REIT space seems to have been a trend for a long time, and is largely unrelated to the recent sell-off. As it happens, STAG seems to have been more resistant to the market downturn, thanks in part due to the more attractive valuation.

A relatively basic comparable company valuation tells us that the REIT should be valued in the $48-57 range if the market would value STAG Industrial in the same manner as it does the competitors.

Another way to approach the question of valuation would be to go back to the recession-length question from before. Again, this comes off as largely subjective given the fact that no one truly knows how long this entire mess is going to last, but let us assume for argument's sake that this bear market is going to last roughly 1,000 days, which is a negative outlook more in line with the dot-com bubble.

That would mean we would have to face this kind of market all the way until late 2024 and early 2025. Until then, STAG Industrial is expected to generate a mid-single-digit FFO yearly growth rate on average as seen in the chart below. 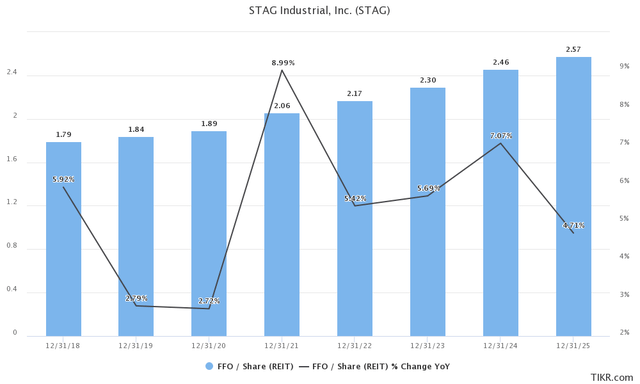 If we assume that the analyst estimates are going to hold and that the REIT will manage to generate the same level of FFO growth even during the recession, assigning a 21-23 times FFO multiple would see STAG Industrial at $53.97-59.11 per share at the time. That would result in roughly a 23% CAGR for STAG Industrial, excluding the 4.7% in dividends.

On the other hand, if we price in the possibility of a more significant slowdown in growth and if we assume that the REIT will generate only $2.30 in FFO in 2025, we could conclude that the same multiple would see the REIT priced in the $48.30-52.90 range. In the same logic, this result would lead to an 18.17% CAGR, also excluding the 4.7% in dividends.

STAG Industrial has a long history of generating consistent shareholder value for its investors and I have no doubts that this process will continue, even throughout the recession-like environment we are entering. However, one of the main things that I disliked about the company was the "lower" dividend yield when compared to the ones found in REIT sectors and the rather unimpressive future dividend growth potential. However, this has changed significantly today with the current yield drawing itself closer to the 5% mark almost by the day.

Back when we first covered the REIT, we highlighted the 3.21% dividend yield as somewhat lackluster and as being one of the downsides. The company has been selling for close to $46 per share at that time, with the FFO payout ratio hitting close to 70%. Considering the expected mid to single-digit FFO growth rate over the next couple of years, this meant investors couldn't expect much in terms of dividend growth. 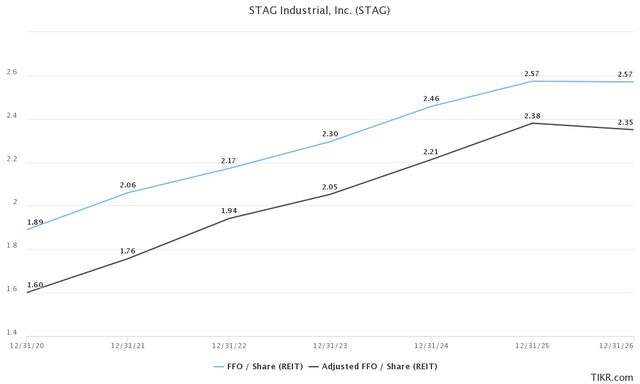 This part remains pretty much as when it comes to STAG Industrial, dividend growth is likely going to suffer in the mid-term. If the assumption about the recession weighs itself against the REIT and STAG Industrial generating in the line of $2.3 in FFO per share in 2025, this would result in a low single-digit dividend growth rate assuming that the payout ratio holds.

While no one knows where the bottom lies in the current market, we believe that this point when the REIT starts to yield a 5% dividend yield represents an excellent point to enter the position and dollar-cost-average throughout the remainder of the bear market. Comparable analysis tells us that the REIT is largely undervalued in the subsector and carries a significantly attractive valuation already. Our valuations seem to indicate that there is a strong upside potential that can be unlocked as the recession-related worries start to slow down. We remain confident that STAG Industrial is an excellent choice in the REIT industry and that it will continue to generate significant shareholder value in the future.

On a journey from law to investing. Following in the footsteps of Charlie Munger. A subscriber to the ideas and principles of focus and value investing.

Disclosure: I/we have a beneficial long position in the shares of STAG either through stock ownership, options, or other derivatives. I wrote this article myself, and it expresses my own opinions. I am not receiving compensation for it (other than from Seeking Alpha). I have no business relationship with any company whose stock is mentioned in this article.