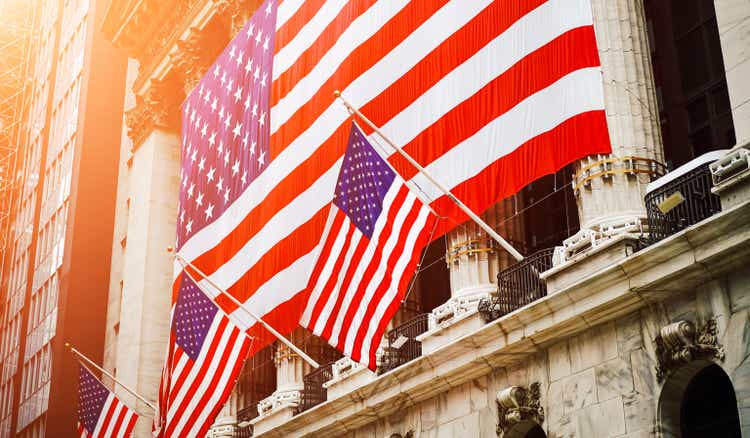 The SP 500 is the gold standard for index investors. The index has blown every other global index out of the water over the past decade: 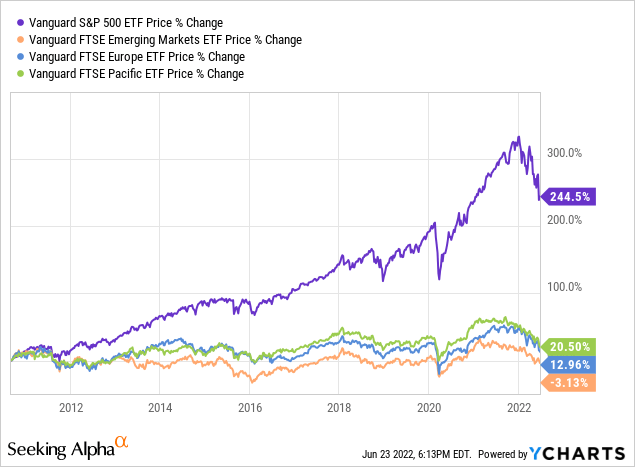 At the peak of the bull market, during the 2021 Berkshire Annual Meeting, Warren Buffett gave an ominous warning to investors. He presented a chart with the world's largest companies by market cap: 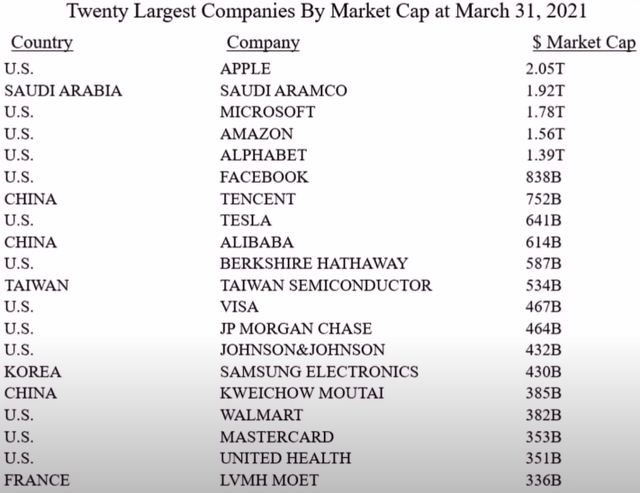 Notice that the majority of these companies are U.S. businesses. If we fast-forward to today, even more of the world's most valuable companies are from the United States, 75%. So that's all fine and good, right? Well, maybe not. The United States makes up only 16% of the World's GDP. Scarier yet, this number is expected to decline. The SP 500 hangs by a string, and that string is globalization.

In his next slide, Buffett introduced the world's most valuable companies in 1989: 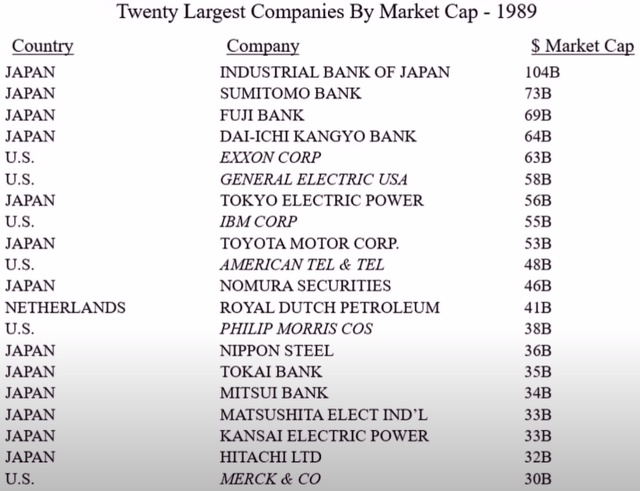 "Japan had this wonderful bull market for a very long time, so you had a number of Japanese companies on the list. Today, there are none."

The world can change in very drastic ways. This article will not only present what we believe the future holds but how to deal with it. We estimate the Vanguard SP 500 ETF (NYSEARCA:VOO ) will deliver an underwhelming return of just 6% per annum in the decade ahead.

Where Returns Come From

Returns essentially come from five factors: revenue growth, margin expansion, multiple expansion (P/E), dividends, and buybacks. Over the past decade, the SP 500 has had all of these things working in its favour. Businesses were growing revenues, and even more so, their margins were expanding: 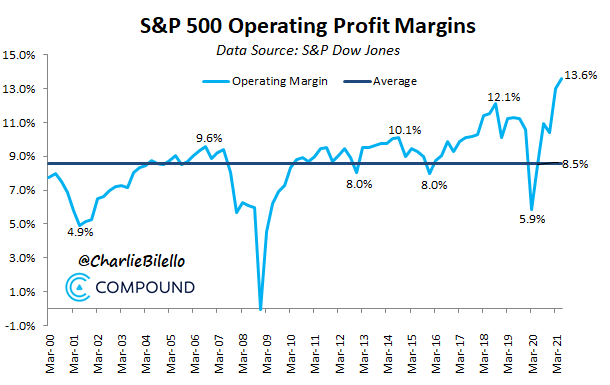 What caused margins to reach a record high? Well, we had unregulated tech monopolies, globalization, low corporate taxes, a booming economy, money creation, zero interest rates, and the list goes on. Are these things all sustainable? We believe the answer is no.

On top of this, companies forgot about old fashion dividends and began buying back stock hand over fist. Let's just say these buybacks weren't very prudent. Many companies were buying back shares above 30x earnings. When we look back on this period in 10 years, we'll ask ourselves, "What were they thinking?" It seems they were driving up the stock price and EPS to cash in on CEO bonuses. Meanwhile, investors are left with a bunch of blown capital that could've been returned to them or used to grow the business. Book value has dissipated as a result. If earnings decline, the SP 500's floor is a much longer way down. The index bottomed at a Price to Book of 1.78x in 2009. If that were to happen again, the SP 500 would fall another 53% from today's levels. Ouch.

The SP 500 has grown earnings per share at 6.5% per annum since 1980. Going forward, there are some positives we see for earnings. We expect the index's growth to continue.

The continued digitalization and automation of operations should be a boon for long-term margins. Artificial intelligence is another boon for business. On a small scale, self-checkout has made grocery stores more efficient by reducing salary expense. Automation has also famously boosted the efficiency of car manufacturers. This is just the beginning. While A.I. may reduce the need for manual labour in the decades ahead, new jobs will be created in other areas and general salary levels should continue to rise. Wages in the United States are projected to grow at 4.8% per annum through to 2032. This increases the spending power of America's consumers. Overall, our lives will improve in ways we cannot yet imagine, and businesses will get their share.

Our 2032 price target is $532 per share, indicating a return of 6% per annum with dividends reinvested.

What To Do About It

If you're not satisfied with a 6% annual return, we believe you have two options:

1) Be A Global Investor

Global valuations are much lower and many countries will grow faster than the United States in the decades ahead. Looking out globally, we are seeing multiple expansion working for investors, and returns of up to 15% per annum. To achieve outsized returns, you have to move opposite the crowd. American investor Ted Weschler, who crushed the market in his personal investing account, advised that to have success in the market, you have to have a "variant perception." It is quite clear that the whole world is overweight American business: 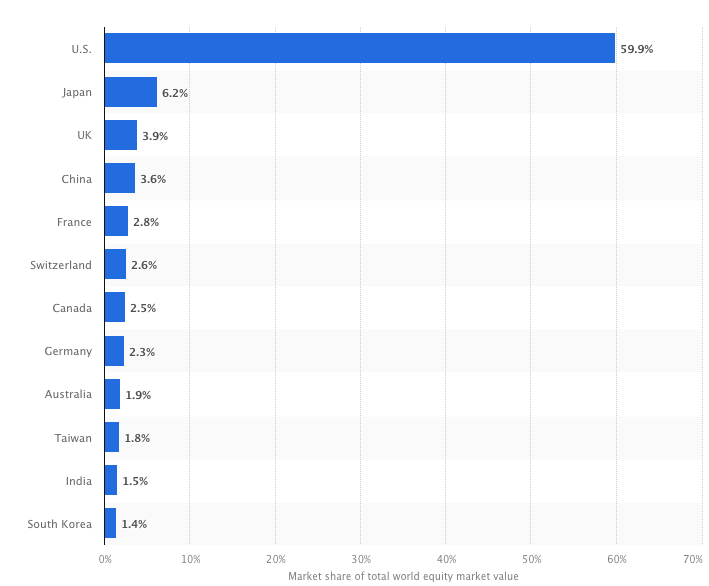 2) Be A Deep Value Investor

The SP 500 has had many lost decades, but Buffett made annual gains of 20% per annum through thick and thin. He did this by buying quality businesses that were demonstrably cheaper than the market.

The Vanguard SP 500 ETF is likely to disappoint investors in the decade ahead. The index has benefitted from multiple expansion, a booming economy, federal support, and a wave of share buybacks. Reversion to the mean is about to rear its ugly head once again. The SP 500 has grown earnings at just 6.5% per annum since 1980 and has a median PE of just 15x earnings. Intelligent investors can dodge a disappointing decade by adopting a variant perception, investing globally, and buying deep value.

A natural contrarian, business student, and a value investor. I seek opportunities in the market that present outsized returns. I am constantly analyzing financial statements, reading books, stress-testing my opinions, and studying the principles of great investors.

Disclosure: I/we have no stock, option or similar derivative position in any of the companies mentioned, and no plans to initiate any such positions within the next 72 hours. I wrote this article myself, and it expresses my own opinions. I am not receiving compensation for it (other than from Seeking Alpha). I have no business relationship with any company whose stock is mentioned in this article.

Additional disclosure: This article includes base-case scenario estimates, using known facts and economic projections. The future is uncertain, and investors must draw their own conclusions.