SCHD: Why It Is Poised To Disappoint 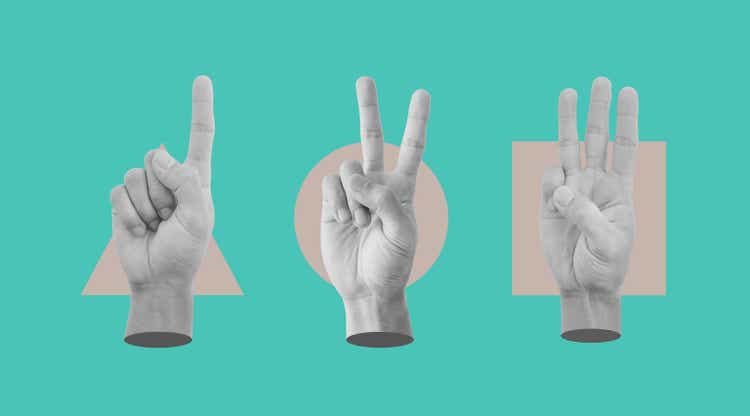 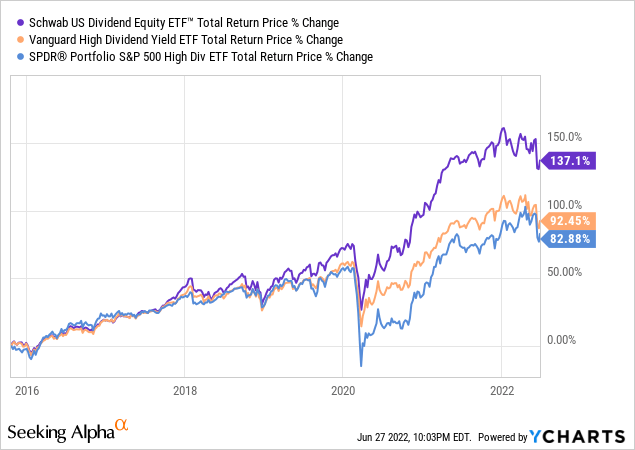 In addition to its strong track record, some of its biggest advantages are:

On top of these, a fifth reason to buy SCHD right now is for its significant exposure to recession-resistant businesses.

A recession is increasingly likely according to numerous metrics and leading businessmen and economists. For example, tech tycoon Elon Musk recently tweeted:

Yes [we are heading for recession], but this is actually a good thing. It has been raining money on fools for too long. Some bankruptcies need to happen. Also, all the Covid stay-at-home stuff has tricked people into thinking that you don't actually need to work hard. Rude awakening inbound!”

I think there’s certainly a risk of recession in the next year. I think given where we’ve gotten to, it’s more likely than not that we’ll have a recession within the next two years.

SCHD's three biggest positions are in biotech companies Merck (MRK), Amgen (AMGN), and Pfizer (PFE), which are all strongly recession resistant. SCHD's overweight positioning with over 13% of its assets under management invested in these three leading biotech companies, leaves it better positioned than most funds to weather a recession.

On top of that, many of its other top holdings - such as Coca-Cola (KO), PepsiCo (PEP), International Business Machines (IBM), and Verizon Communications (VZ) - are also recession resistant. In fact, seven out of their top 10 positions are considered recession proof, making up a whopping 29.24% of their portfolio in just those 7 positions.

While these five reasons to buy SCHD - its strong track record, significant liquidity, low fees, totally passive diversification, and defensive positioning - are all compelling, there are also three reasons why we believe now is not the time to hold this security.

The first reason is that - despite the sharp pullback in stocks year-to-date and in SCHD itself - conditions are still looking fairly risky in the big picture of things. Interest rates remain quite low relative to historical levels and inflation rates remain at around four-decade highs. 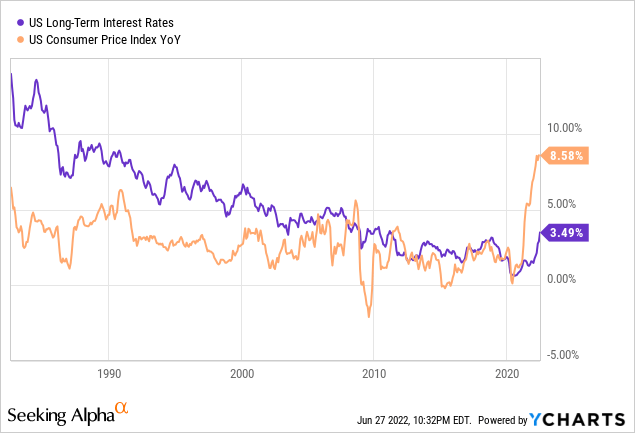 As a result, the Federal Reserve is still much more likely to raise interest rates (potentially aggressively) to battle inflation than it is to cut them or even hold them flat in order to prop up the economy and stock market, at least in the short-term.

This of course poses as a risk of sustained headwinds for stock valuations. As Warren Buffett of Berkshire Hathaway (BRK.A)(BRK.B) once said:

The most important item over time in valuation is obviously interest rates. Low interest rates make any stream of earnings from investments worth more money. Any investment is worth all the cash you're going to get out between now and Judgment Day, discounted back. Well, the discounting back is affected by which interest rates you use.

While this is not a strike against just SCHD of course, it is still something to keep in mind when deciding whether or not to invest in SCHD at the moment. If the Federal Reserve continues to raise interest rates, it will not bode well for SCHD all else remaining constant.

The second reason to be wary of investing in SCHD right now is that most of its holdings are in large international companies which are likely to suffer from global geopolitical and macroeconomic headwinds. Furthermore, much of the world is either on the brink or already in recession, and ongoing sanctions against Russia with the threat of war in East Asia means that China could be included in the West's sanctions program in the near future. As a result, investors should carefully consider these risks before increasing their exposure to these risks over perhaps taking a more defensive posture by investing in Gold (GLD) or even picking individual stocks or funds with less geopolitical risk.

Last, but not least, despite the recent pullback in the share price, the dividend yield for SCHD (3.86%) is too low right now to truly serve as a source of significant income in an investor's portfolio. With U.S. long-term interest rates at 3.49%, investors going to SCHD for yield and assuming the economic and geopolitical risks that come with it relative to the high degree of safety associated with U.S. savings bonds (or even better yet, higher yielding inflation-linked bonds (TIP)) may not be getting the best risk-adjusted income.

For investors who are looking to generate passive income to fund living expenses (i.e., either early retirees or those looking to achieve financial independence) in an era with higher interest rates and sky-high inflation, a 3.86% dividend yield is simply not going to cut it. Financial advisors are even now saying that the 4% Rule is no longer a valid approach to retirement planning and - with the stock market volatility and economic uncertainty where they are - depending on selling shares to supplement dividend income is likely not a sleep well at night strategy.

While SCHD does have a good bit going for it, including the five advantages we discussed earlier in this article, we believe that the overall risk-reward is simply not attractive enough here to justify deploying new capital into this fund and therefore rate it a Hold.

Instead of relying on a 3.86% yield, at High Yield Investor we enjoy a 6.6% current dividend yield in our Core Portfolio with dividend coverage of 1.88x and very strong dividend growth achieved through a combination of organic position-driven dividend growth as well as opportunistic capital recycling whereby we sell stocks that have appreciated to fair value and reinvest the capital into deeply undervalued and higher yielding opportunities.

This approach works especially well for us given that we especially like to invest in securities with high yields and business models that generate stable cash flows, making them easier to value and thereby minimizing our mistakes.

While SCHD has been a great investment for investors and likely will remain a decent performer through the upcoming recession given its low fees and defensive posture, investors looking to generate meaningful outperformance and sufficient passive income to fund living expenses in this high inflation environment will likely be disappointed.

If you want access to our Portfolio that has crushed the market since inception and all our current Top Picks, join us for a 2-week free trial at High Yield Investor.

We are the fastest growing high yield-seeking investment service on Seeking Alpha with ~1,300 members on board and a perfect 5/5 rating from 145 reviews.

Our members are profiting from our high-yielding strategies, and you can join them today at our lowest rate ever offered.

You won't be charged a penny during the free trial, so you have nothing to lose and everything to gain.