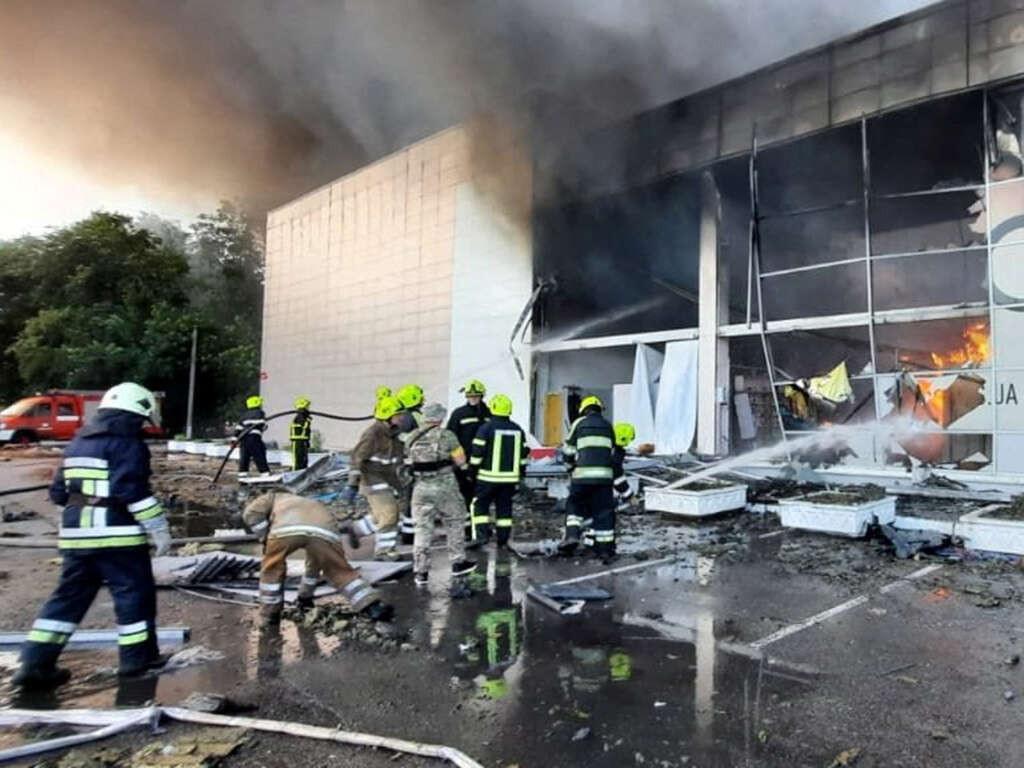 Photo by The State Emergency Service of Ukraine via Reuters

BERLIN – On the morning of 8 April, a Russian ballistic missile attack on a railway station in Kramatorsk, a city in eastern Ukraine, killed 52 people. Many of the dead were refugees fleeing west, away from the escalating fighting in Donbas.

It is this attack that came to mind when on Monday 27 June, a similar strike on a busy shopping centre in the central Ukrainian city of Kremenchuk was confirmed to have killed at least 20. Though the death toll will likely rise over the coming days. Ukrainian officials estimate that 1,000 people were inside the shopping centre at the time of the attack.

Both strikes appear to have been indiscriminate attacks on cities that had been spared much fighting. Both utilised highly advanced weaponry to target buildings with no apparent military purpose, which Russian forces would have known contained civilians. Even if they did host legitimate targets under international law, targeting them would still have been illegal: the civilian casualties in both cases were too disproportionate to allow the strikes to go ahead.

The purpose of Russia’s brutal tactics is clear: to sow terror into the hearts of Ukrainian defenders and civilians. There is no way that Russian forces could have not known that a railway station would have been full of civilians at 10.30am, when the Tochka-U ballistic missile hit Kramatorsk station; similarly, the recent targeting of the shopping centre in Kremenchuk could only have been intended to kill civilians.

The Russian Ministry of Defence has admitted responsibility for the attack on Kremenchuk, saying in a statement that its forces hit an ammunition storage facility in the city, the detonation of which “caused a fire in a non-functioning shopping centre located next to the plant”. The admission of responsibility came after Russia’s deputy permanent representative to the UN, Dmitry Polyansky, claimed the attack was a fake Ukrainian “provocation”. He compared it to Bucha, the suburb of Kyiv where hundreds of Ukrainians were found to have been murdered by Russian troops in the early days of the war.

Sign up for The New Statesman’s newsletters Tick the boxes of the newsletters you would like to receive.

A weekly newsletter helping you fit together the pieces of the global economic slowdown.

Quick and essential guide to domestic and global politics from the New Statesman's politics team.

The New Statesman’s global affairs newsletter, every Monday and Friday.

The best of the New Statesman, delivered to your inbox every weekday morning.

The New Statesman’s weekly environment email on the politics, business and culture of the climate and nature crises - in your inbox every Thursday.

Our weekly culture newsletter – from books and art to pop culture and memes – sent every Friday.

A weekly round-up of some of the best articles featured in the most recent issue of the New Statesman, sent each Saturday.

A newsletter showcasing the finest writing from the ideas section and the NS archive, covering political ideas, philosophy, criticism and intellectual history - sent every Wednesday.

Along with cruise missile attacks on the capital Kyiv and the western city of Lviv, the first for weeks, the targeting of Kremenchuk sends a message to Ukrainians: nowhere in their country is safe. More than that, the bombings signal that Russia is willing and able to use overwhelming force to punish Ukrainian counterattacks.

Olga Musafirova, Ukraine correspondent for the independent Russian newspaper Novaya Gazeta Europe, wrote that central Kyiv could be targeted in retaliation for Western countries providing multiple-launch rocket systems, which Ukraine has requested. Or if it attempts to retake occupied Kherson. Or if it targets the bridge connecting occupied Crimea with the Russian mainland. Resistance will be punished with terror.

In a sense, Russia’s increasingly brutal tactics are a return to form. Its wars – from Chechnya in the 1990s to Syria from 2015 – are characterised by indiscriminate bombing of cities until they are all but razed to the ground, and the flag of Russia or its proxies is raised over the ruins. First Grozny, then Aleppo, then Mariupol. Russia’s military is effective at waging wars of annihilation involving the heavy use of artillery and terror tactics; that is how it is now making slow – if consistent – progress in Donbas. It is less effective at prosecuting regime change “special operations”, the ill-fated initial aim of its invasion of Ukraine.

The recent strikes came ahead of two pivotal summits among Western countries. At the G7, held in southern Germany on 26-28 June, leaders of the world’s richest democracies agreed to ban imports of Russian gold and explore a price cap on Russian energy, intended to limit the Kremlin’s benefits from rising energy costs. That summit is to be followed by a meeting of Nato in Madrid on 28-30 June, which is expected to see the alliance define Russia as a threat and beef up its capabilities for the defence of the Baltic states, which fear that they could be Vladimir Putin’s next targets.

If anything, the attacks on Kremenchuk, Kyiv and Lviv signal that the Kremlin is committed to the war in Ukraine. Kyiv is worried about “war fatigue” setting in among Western populations as their attention turns towards the cost of living and the prospect of a difficult winter. Moscow has no such fear.