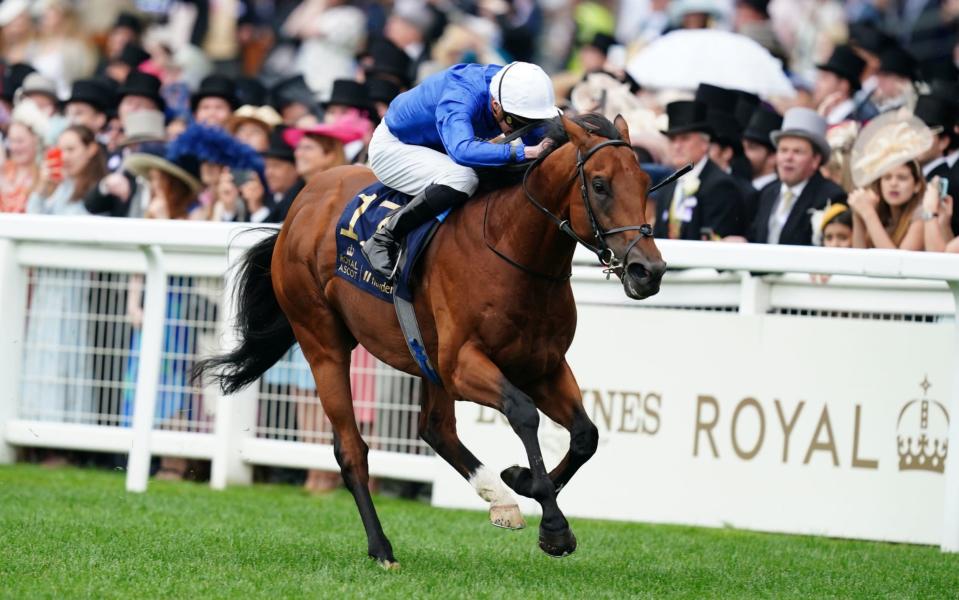 As easy as it gets

Missed The Cut takes it up 2f out

And gallops away from the field... Missed The Cut romps to an impressive win!

That was a classy performance.

Tollard Royal was very keen in the early stages

And has bolted into the lead as they turn for home.

Aldous Huxley and Phantom Flight do not run after difficulty getting them into the stalls.

After two wide-margin victories as a novice, George Boughey's mount is also our tipster Marlborough's pick:

A well-bred son of Quality Road, Missed The Cut has looked a powerful galloper in his three career starts to date and, provided his draw in stall 13 doesn’t see him too wide around Ascot’s bends, he can run a massive race under superstar jockey James McDonald.

An extraordinary comeback story for the winner

Joint owner Chris Kiely explains how Rohaan nearly had to be retired back in March after a fall on the gallops.

But trainer Dave Evans has managed to get the horse back fit and firing in three months - and he has just won the Wokingham off top weight. Wonderful stuff.

Ryan Moore summons a stunning late burst from his mount and Rohaan wins this race for the second year in succession!

He weaved through a wall of horses in the closing stages to win by three-quarters of a length.

Rohaan becomes the first horse this century to win back-to-back renewals of this race!

Our tipster's view of the Wokingham Stakes (5pm)

Compensation duly awaits last year’s Wokingham runner-up FRESH, who comes forward off a 2lb higher mark and is strongly fancied to go very close under master rider Danny Tudhope, who is having a week to remember. Fresh is a gelding on an upward curve still and can prove the one they all have to catch. Jumby is proven at this course and, with conditions to suit and world-class rider William Buick in the saddle, he can run a big race at a likely attractive price. 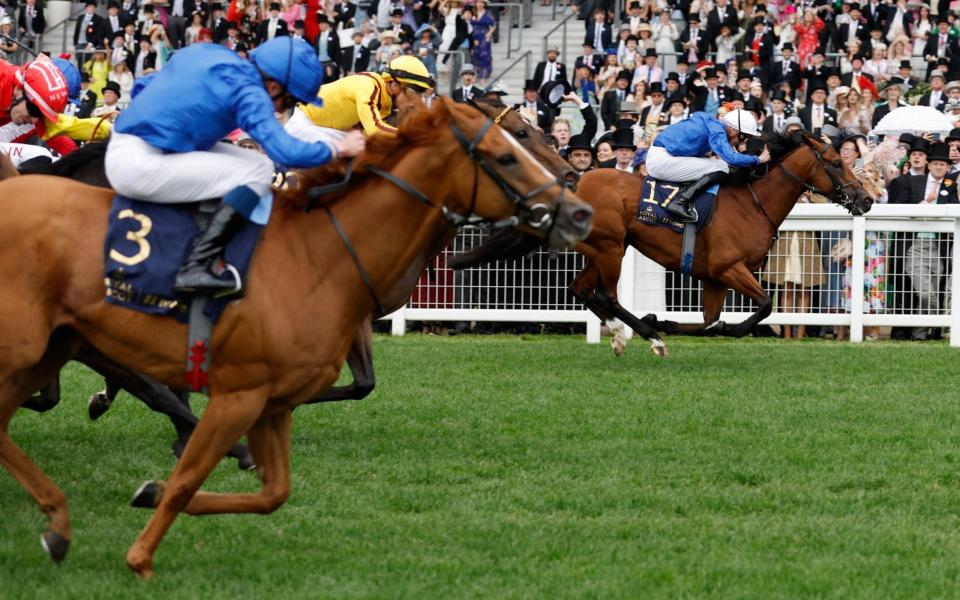 The full result in the Platinum Jubilee Stakes

It's a Godolphin one-two with Naval Crown and Creative Force, but eight or nine of them had a chance in the closing stages!

Naval Crown has won an absolute thriller on the nod.

In the £1m Platinum Jubilee Stakes! They immediately split into two groups - Home Affairs leads on the stand side with Campanelle leading a bigger group on the far side.

Can the Queen have a Royal Ascot winner?

King's Lynn runs in this race for Her Majesty and is a 40/1 shot as it stands.

The big race is up next

There are a couple of high-profile Australian raiders in the upcoming Platinum Jubilee Stakes (4.20pm) - Home Affairs and Artorious are both at the top of the betting market.

Nature Strip’s demolition job in the King’s Stand was but a further reminder that Australia is home to the best sprinters in the world and Australia is doubly-represented in this year’s £1 million Platinum Jubilee. Whilst Home Affairs is all the rage in the market, it may well be that ARTORIUS is very much the forgotten horse in the race and can run just as well as his compatriot here. Anthony and Sam Freedman are pound-for-pound one of the best operations in Australia and Artorius can be finishing with a flourish for the father and son training partnership, with the booking of Jamie Spencer more than catching the eye.

"The horse has been brilliantly prepared, he got into a beautiful rhythm and stretched out.

"He was really, really good today. He just flowed. We've always thought a lot of him but a few little things haven't gone his way.

"He's never felt that good though." 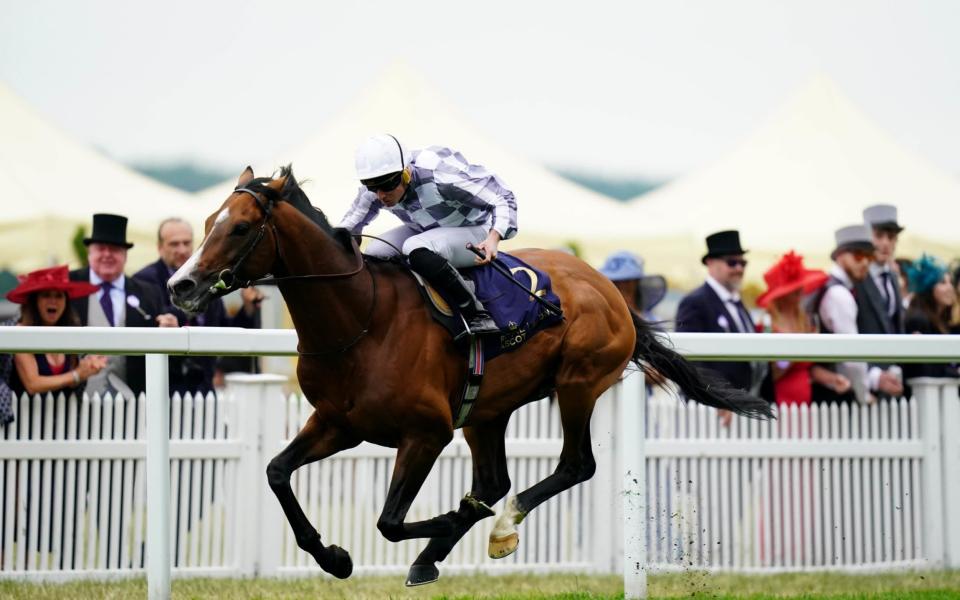 Broome makes all to win the Hardwicke!

Ryan Moore was relentless on Broome from the front and kept on well to win it comfortably enough in the end.

Broome leads by three lengths or so

As they turn for home - plenty to do for Hurricane Lane.

After a slight delay

They're off in the Hardwicke. It's Solid Stone, Hurricane Lane and Broome the first three after a couple of furlongs.

Hurricane Lane is the odds-on favourite for the Hardwicke Stakes

The race is due off shortly.

Who was headed late on but dug deep to triumph in decent fashion.

It's Noble Truth from Monaadah

as they hit the 2f post... and Noble Truth holds on for a gun to tape win!

He raced really keenly early on but managed to hold off all-comers.

The Jersey Stakes is under way

The favourite Noble Truth leads in the early stages.

Next up it's the Jersey Stakes at 3.05pm

Here are the thoughts of our champion tipster Marlborough:

A Guineas of some description has invariably been a good pointer for this and, having surely found a mile too far for him in the Newmarket Classic, DUBAWI LEGEND is fancied to bounce right back to his best with a massive performance here. He mixed it with some very good horses over seven furlongs at two, including an excellent second to Native Trail in the Dewhurst before a coffin draw in stall 13 put paid to his chances in the Breeders’ Cup Juvenile Turf. The seven-furlong distance can make the difference here and he is fancied to go close.

Reaction from the winning jockey

That's Danny Tudhope's fourth win of the week and means he is just one behind Ryan Moore in the race to be leading jockey.

"A bit of a surprise to be honest. We liked him but we didn't think he'd go and do that.

"It's only his first run... he's a proper big animal and I'm pretty sure he'll improve a lot from that."

But Holloway Boy blitzes past to win by a length on his racehorse debut!

A stunning performance from the 40/1 shot who was dropped in as they broke but stormed through the field late on.

Another winner for Danny Tudhope - his fourth of the week.

In the Chesham Stakes! This one is over 7f and Alzahir has charged into the lead early on.

They'll start to be loaded into the stalls any time - not long before we get going.

Not long before the first race of the fifth and final day gets under way. 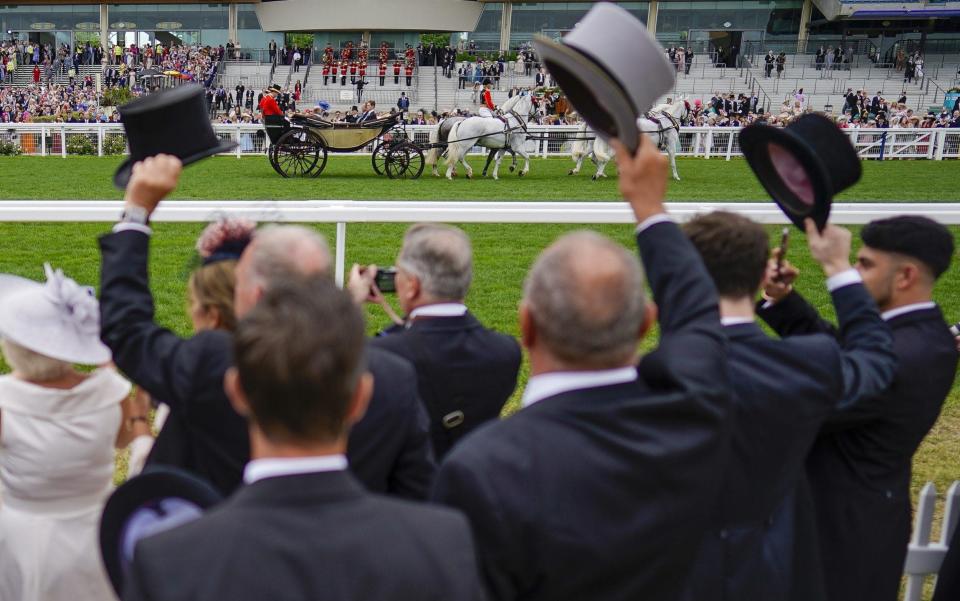 News from the track

Forty-five minutes or so

Until the first race of the day - the Chesham Stakes at 2.30pm. Here's what our tipster has to say about it:

John and Thady Gosden are treble-handed in their pursuit of a fourth win in the Chesham Stakes and it looks like Frankie Dettori’s mount ALZAHIR could prove the best of their three-pronged assault on the race. He very much caught the eye when runner-up on his only start at Yarmouth over seven furlongs and should make a considerable leap of improvement forward from that race. The Foxes caught the eye on debut and should relish an extra furlong; he can reward each-way support.

Speaking of the Queen

This fascinating piece offers a behind-the-scenes look at Her Majesty's loyal care for her retired race horses.

Queen misses all of Royal Ascot for first time in reign

The Queen will today miss the final day of Royal Ascot, marking the first time she has failed to attend the spectacle in her 70-year reign.

👑 The Queen will today miss the final day of Royal Ascot, marking the first time she has failed to attend the spectacle in her 70-year reign https://t.co/SpK7APgeWB

These two have ridden a fair few winners between them

Looking for some day five tips?

We've got you covered with this guide to all seven races by our champion tipster Marlborough.

Brollies at the ready

After a scorching day at the course yesterday which saw the dress code relaxed, it's a slightly different scene today... 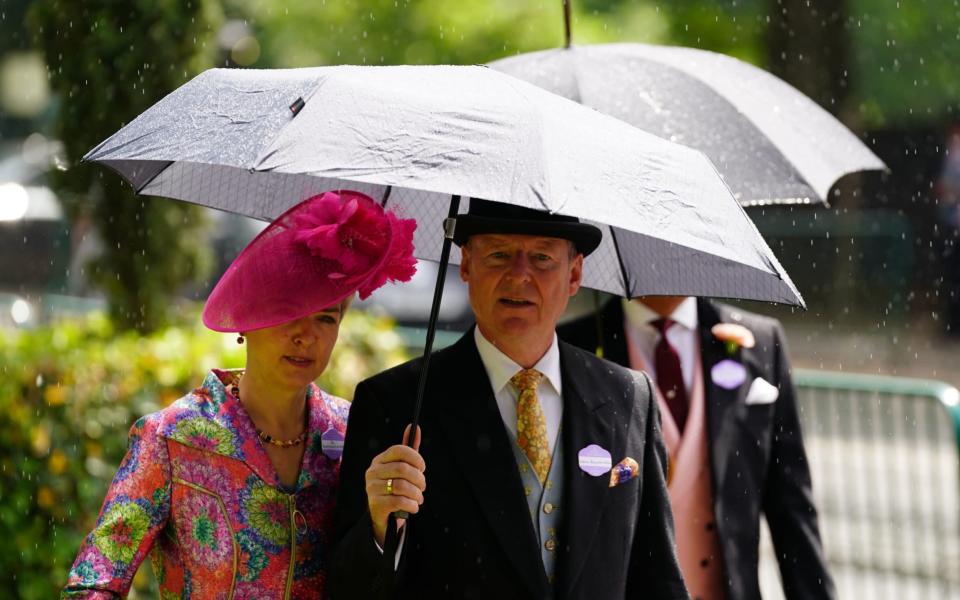 Racegoers shelter from a shower ahead of day five - PA

Here's what's in store this afternoon. The going remains good to firm as it has been all week, although there is some rain on the way...

And welcome to our live coverage of the final day of Royal Ascot 2022, with the Platinum Jubilee Stakes the highlight of today's card.

Our racing correspondent Marcus Armytage previews the action for day five, which provides one final chance for the Queen to celebrate a winner:

No race has a more international feel to it this week than today’s Platinum Jubilee Stakes with runners from Japan, Australia, America and Ireland as well as a useful home team but it may pay to look towards Yorkshire for the winner; John Quinn’s mare Highfield Princess.

Highfield Princess is one of the sport’s great rags to riches stories; unraced at two, rated a lowly 57 handicapper less than two years ago, a winner at Royal Ascot last year, all-weather champion at Easter to a career best two-and-three-quarter lengths win in a Group Two at York last time. She is versatile, tough, is getting better and faster with racing and looks uncomplicated.

She was bred by John Fairley, the former boss of Yorkshire TV and author of several books on racehorses in art. He is Quinn’s landlord and can see her looking out of her stable door when he is having his breakfast - the ultimate for an owner-breeder.

Having not run at two because she had an injury, this is only her third season so she is perfectly entitled to be still improving.

She will need to be though, that is for sure. Home Affairs represents Chris Waller and James McDonald who won the King’s Stand on Tuesday with Nature Strip and they will hope to bookend their visit with victory in this. He can even claim Nature Strip’s scalp when they last met although Nature Strip had a slow start that day which might have flattered Home Affairs slightly.

Artorius, the other Aussie, looks made for a Jamie Spencer trademark last to first ride up Ascot’s stiff six. The US filly Campanelle is technically unbeaten at Ascot having won here as a two-year-old and been promoted to first in last year’s Commonwealth Cup after being bumped by Dragon Symbol and if that young race is a feeder for this, then they should both be thereabouts providing Irad Ortiz is looking forwards not backwards when the stalls open this time.

Creative Force is another who likes Ascot having won the Jersey and Champions Sprint here. That he gets a bit further might not be a bad thing in a race where they will not hang around. Only the horses pulling the Royal Procession will have been up the straight more often than the Queen’s King’s Lynn this week. He was a very respectable seventh in the King’s Stand but this, Her Majesty’s last shot of the week, does not look any easier.

Hurricane Lane was only beaten twice last year when he was third in the Derby and third in the Arc. He was one of the middle distance stars of the Classic generation and despite this being his first run back he looks the pick of the field in the Hardwicke.

First-season trainer James Horton, formerly assistant to Sir Michael Stoute, has made a terrific start to his career. Asjad has been responsible for two of his winners and he can go close in the Wokingham.

With a Gold Cup already on the mantlepiece Aidan O’Brien has had a pretty reasonable if not dominant week but he can close the meeting by winning the Queen Alexandra with Wordsworth who should have too much class for his rivals if he gets the trip. When he had a recce of the course in the Sagaro Stakes earlier this spring he did not look like he would be troubled by another five furlongs.