Efforts to remove a memorial to a man who invested in slave-trading companies from a Cambridge University college chapel have been likened to trying to 'get rid of an elderly and unpopular relative'.

Moving the monument but retaining the financial benefits of the 17th century benefactor could be said to be 'money laundering on an industrial scale', an ecclesiastical court hearing was told.

Tobias Rustat, who invested in the Royal African Company, became one of Jesus College's largest benefactors before the 20th century.

The college last year submitted an application to the Diocese of Ely to relocate a memorial to Rustat from its chapel to a permanent exhibition space in the college. 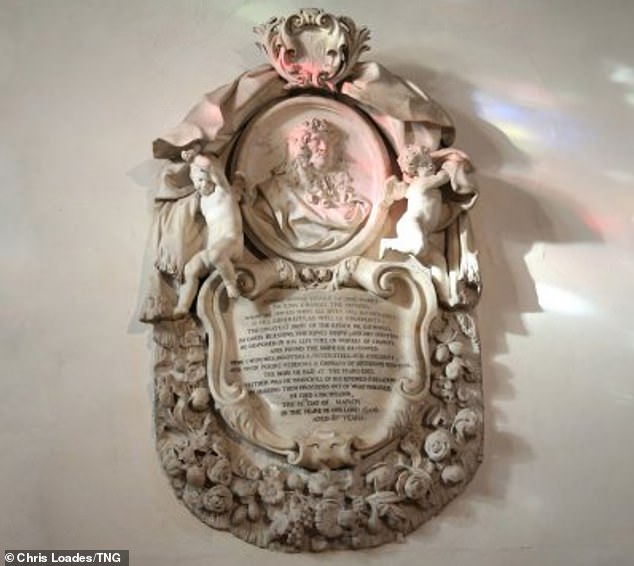 Efforts by Jesus College students to remove a memorial to Tobias Rustat, who invested in the Royal African Company, were likened to trying to 'get rid of an elderly and unpopular relative' 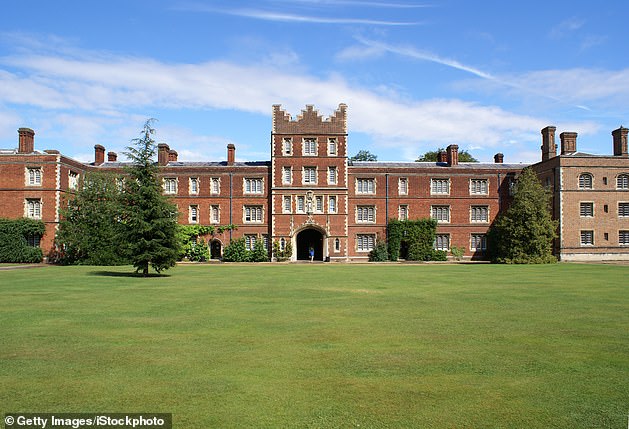 Cambridge's Jesus College set up a Legacy of Slavery Working Party, which recommended Rustat should not be celebrated by the college

A consistory court case, which concluded on Friday, is due to help decide the fate of the monument.

Mark Hill QC, representing petitioners who want the memorial moved, said the case is not about cancelling Mr Rustat, but about placing the monument in a location where it can be 'interpreted, explained and fully dealt with'.

He said 'we cannot hide' from the fact the memorial 'glorifying the benevolence of a man who was responsible for investing in and directing companies which traded in enslaved people is an abomination that causes offence'.

Justin Gau, a lawyer acting for the Rustat Memorial Group of alumni which opposes the removal, argued that 'no clear, safe, final destination' for the memorial has been agreed, and described the petition to move it as 'a mess'.

On the practicalities of a move, Mr Gau said the 3.5 tonnes of marble is 'not something you unscrew from a kitchen wall', and branded it a 'monument of national and international importance'. 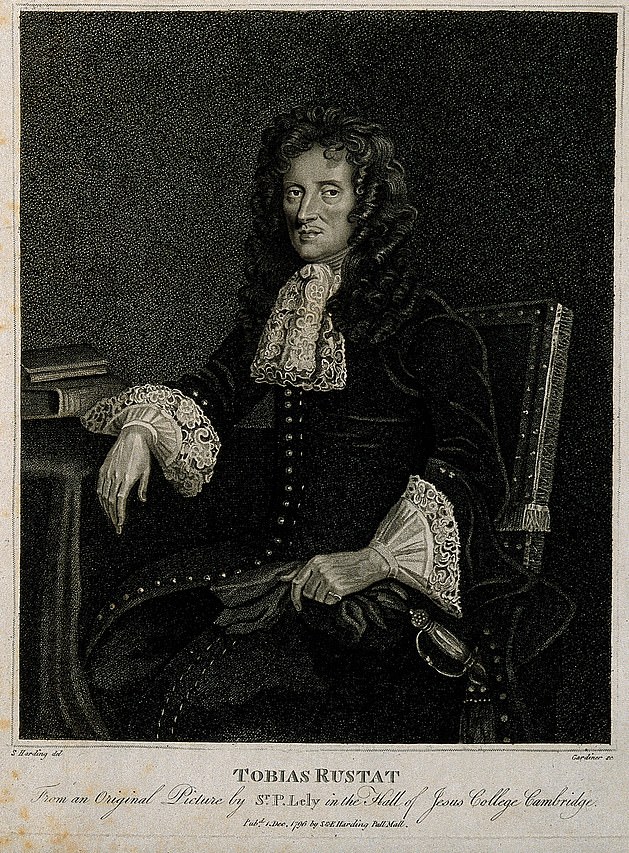 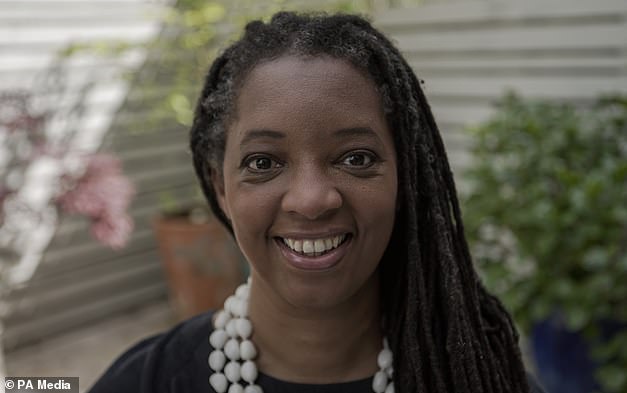 The Master of Jesus College, Sonita Alleyne, said that the proposal to relocate the monument to an educational exhibition space was 'part of a process of critical self-reflection on the long-term legacies of enslavement and colonial violence'

University benefactor and slave trade investor: Life of Tobias Rustat - and his links to Edward Colston

A statue of Tobias Rustat

Tobias Rustat was a 17th century benefactor of the University of Cambridge, as well as a servant to King Charles II.

He created the first fund for the purchase of books at the Cambridge University Library.

Born circa 1606, he trained as an apprentice to a barber-surgeon in his youth before becoming a servant - first to the 2nd Duke of Buckingham and later to the monarch.

He accumulated his wealth during his career as a courtier - but also invested in several trading companies, including the Company of Royal Adventurers of England Trading into Africa - commonly known as the Royal African Company (RAC).

The Company had complete control of Britain's slave trade, as well as its gold and Ivory business, with Africa and the forts on the coast of west Africa.

Later in life, Rustat became a benefactor to the university, focusing mainly on Jesus College, where his father had been a student. He died in 1694.

A contemporary of Rustat was Edward Colston, who became Deputy Governor of the Royal African Company.

During Colston's tenure, his ships transported around 80,000 slaves from Africa to the Caribbean and America. Around 20,000 of them, including around 3,000 or more children, died during the journeys.

Colston's brother Thomas supplied the glass beads that were used to buy the slaves.  Colston used a lot of his wealth, accrued from his extensive slave trading, to build schools and almshouses in his home city.

A statue was erected in his honour as well as other buildings named after him, including Colston Hall.

But after years of protests by campaigners and boycotts by artists the venue recently agreed to remove all reference of the trader.  In the wake of the Black Lives Matter protests in 2020 sparked by the death of George Floyd in the US, the statue of Colston overlooking the harbour in Bristol was torn down.

He told the hearing the best approach would be to 'contextualise' Mr Rustat's life with a plaque nearby.

Mr Hill said Historic England had concluded that removing the memorial from the chapel would still leave it as 'a building of exceptional significance'.

He said the memorial is 'readily moveable' and that this could be done 'without undue difficulty or without any risk to its integrity', noting that it had previously been moved from Mr Rustat's home in Chelsea to the chapel and then moved within the chapel 'on several occasions'.

He said it is clear that 'the presence of the memorial and its prominent position in the chapel is undoubtedly compromising the work and mission of the Church of England.'

But Mr Gau told the hearing, which was held in the college chapel: 'This is part of an unfortunate desire to, as it were, get rid of an elderly and unpopular relative, though one who has been hugely generous in the past.'

He added: 'We say the best way to deal with a difficult relative is not to put them away but to live with them and learn from them.'

Of the efforts by the petitioners, he said: 'In simple terms, they are keeping the benefits but hiding the sources.

'It might be said that this is money laundering on an industrial scale.'

A 'bogus claim' had been allowed by petitioners to spread, Mr Gau said, that Mr Rustat had made his fortune from the slave trade.

He said Mr Rustat 'made no financial gain from any investment' in the slave trade, adding that 'it might be of some pleasure that he lost money by doing it'.

But Mr Hill said it is 'beyond dispute' that Mr Rustat had been an 'investor, lender and assistant' involved with the Royal African Company.

He said moving the memorial would allow the 'historical nexus' of Mr Rustat's involvement 'in both the slave trade and the college to be properly understood'.

He said Mr Rustat continues to be remembered 'as a generous benefactor of this college' and that the historical figure was not being 'cancelled or erased', adding that the chapel 'will always be his final resting place'.

Mr Gau read extracts of emails he said were sent by students of Jesus College.

One said 'deliberately inflammatory language' had been used in describing the memorial as celebrating slavery, while another spoke of the anxiety of some students to come forward in opposing the bid for relocation, Mr Gau said.

The lawyer said: 'It is troubling that a college of such stature and such ability in terms of promoting equality, diversity and free speech should be accused of stifling free speech by some of these undergraduates.'

His Honour Judge David Hodge QC said he would give his decision in writing 'as soon as I can'.

He praised the 'humanity, consideration and good feeling' with which the three-day hearing had taken place.