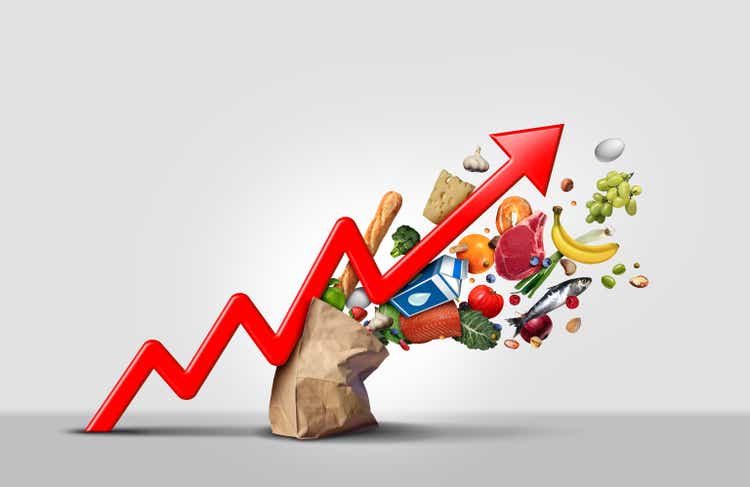 I've covered several inflation-hedge ETFs in the past. Some focus on individual asset classes, including treasury-inflation protected securities, commodities, and global miners and more. Others are diversified, multi-asset class ETFs. The VanEck Inflation Allocation ETF (NYSEARCA:RAAX ) is an example of the latter, and offers investors diversified exposure to most relevant inflation-hedge asset classes, with a strong commodities focus. Asset allocations are partly dependent on fundamental and technical indicators, a strategy meant to maximize gains while minimizing losses. Said strategy has been ineffective in the past, leading to moderate underperformance relative to peers.

In my opinion, although RAAX is an effective inflation hedge and reasonable investment opportunity, there are similar, stronger, better-performing alternatives out there. The SPDR SSGA Multi-Asset Real Return ETF (RLY) comes to mind. RLY is extremely similar to RAAX, but with a stronger asset allocation strategy and performance track-record. I last covered RLY here. As such, I would not be investing in RAAX at the present time.

RAAX is a diversified, multi-asset class inflation-hedge fund-of-funds. It invests in most relevant inflation-hedge asset class, through investments in cheap, simple, broad-based index ETFs. RAAX's investments include commodity futures, as well as energy, real estate, infrastructure, mining, and commodities stocks, all effective inflation hedges. The fund also includes small investments in bitcoin, clean energy stocks, and mortgage REITs. These combined comprise about 5% of the value of the fund. These investments are not straightforwardly inflation hedges, and they have not performed particularly well during prior periods of high inflation. Their inclusion is a negative, but as allocations are small, not a significant negative or deal-breaker.

RAAX asset class weights and largest holdings are as follows. 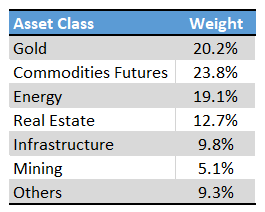 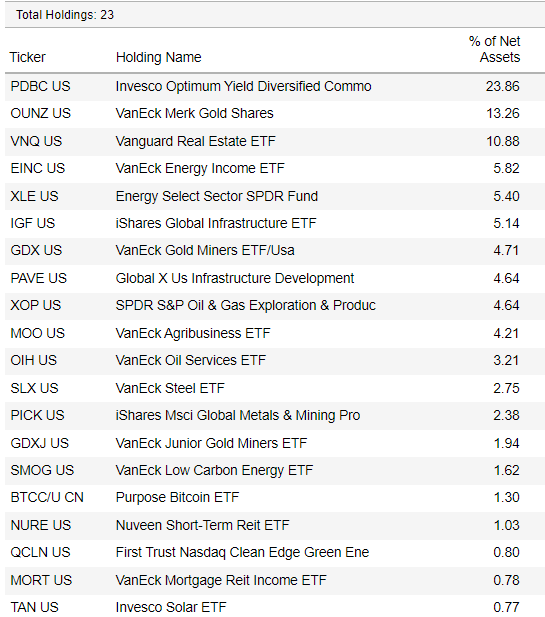 As can be seen above, RAAX invests in all relevant inflation hedge asset classes, but clearly focusing on gold, commodities, and energy. I would have preferred a smaller allocation to gold, if only for diversification purposes, but these are all common, sensible, and broadly effective choices.

In general terms, RAAX's underlying asset classes and funds should outperform when inflation is high. Inflation has surged YTD, during which RAAX's underlying holdings have generally significantly outperformed, as expected. There a couple of exceptions, especially real estate, which has slightly underperformed YTD. Still, results are broadly positive. 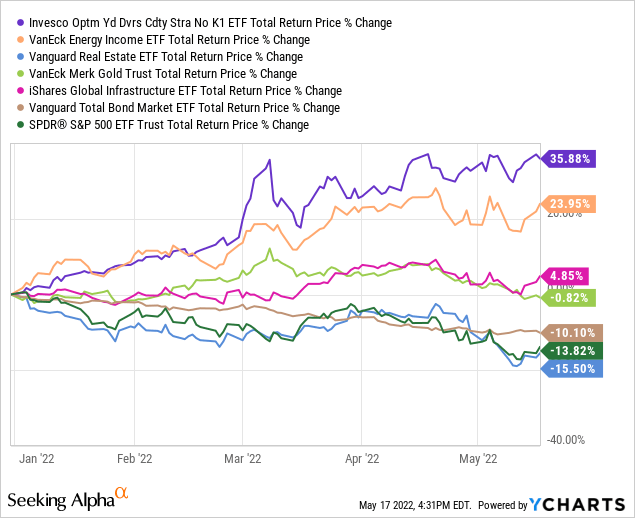 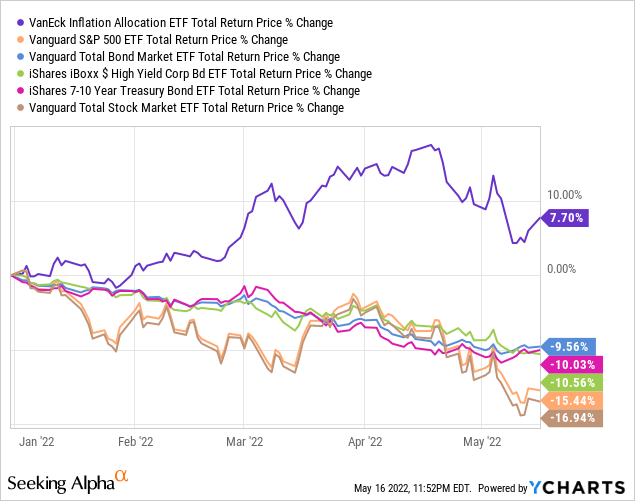 In my opinion, and considering RAAX's holdings, strategy, and performance track-record, the fund is a broadly effective multi-asset class inflation-hedge ETF. The fund should outperform when inflation is high and prices are rising, making it an appropriate investment opportunity for investors looking to hedge their portfolios against inflation. Nevertheless, there is an issue with the fund's strategy and performance which makes it a weaker investment relative to its peers. Let's have a look.

RAAX's asset allocations are partly dependent on fundamental and technical indicators. The fund might decide to overweight gold if the asset class is looking relatively cheap, or might decide to underweight energy if oil prices are looking frothy. The specific process is proprietary, so details are scare.

Said strategy is meant to maximize gains, by investing in asset classes with solid fundamentals and (potential) market-beating returns. From comparing RAAX asset class weights with those of its peers, it seems that the fund is currently overweight gold, with a +20% allocation. Gold has underperformed YTD relative to most commodities YTD, so it seems unlikely that overweighting said asset class was the right call. 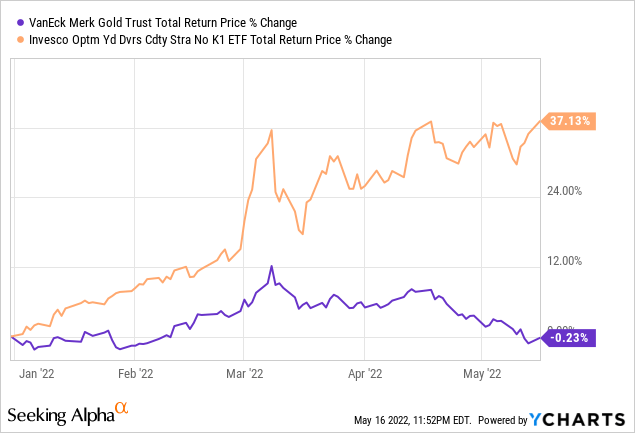 RAAX itself has underperformed relative to RLY, a close peer, too. Overweighting gold almost certainly contributed to the fund's underperformance. 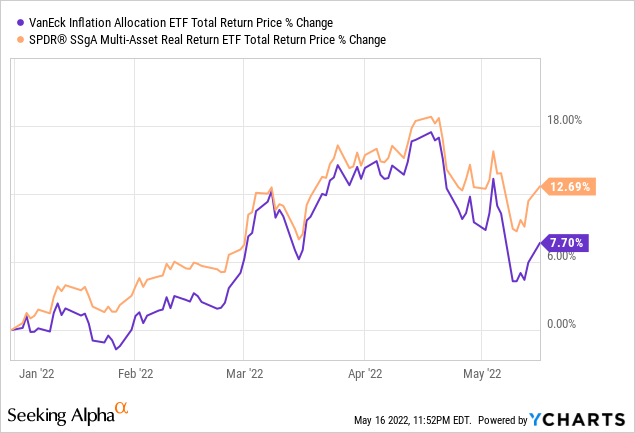 From what I've seen, RAAX's asset allocation strategy has been ineffective in selecting best-performing asset classes, or in maximizing gains. There is, however, limited evidence for this, as we lack exact information about the fund's asset allocations through time. Perhaps RAAX bought gold in a very opportune time, although this doesn't seem terribly likely: gold has underperformed for quite a while now.

RAAX's asset allocations strategy is also meant to minimize losses during downturns, by shifting towards cash during these. Timing the market in this manner is quite difficult, and RAAX has not been able to successfully do so. Looking at the fund's returns from the first half of 2020, the onset of the coronavirus pandemic, we can easily surmise when the fund went into cash, and when the fund exited said position. The timing was off in both cases. RAAX went into cash in late March 2020, a week or two after the market bottomed, and so did not avoid any losses. RAAX exited cash in late June 2020, during which commodities and other relevant asset classes had rallied by more than 10%, missing a big chunk of the recovery. By late 2020, the fund was lagging behind RLY, a close peer, by almost 10%, almost exclusively due to ineffective, unprofitable market timing / asset allocation decisions. 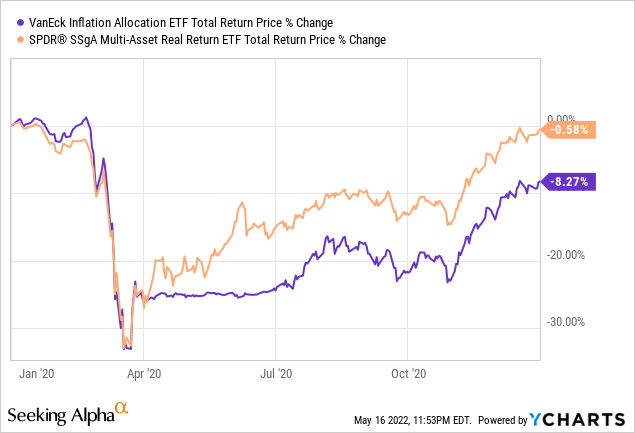 RAAX has underperformed since inception too, almost exclusively due to the above. 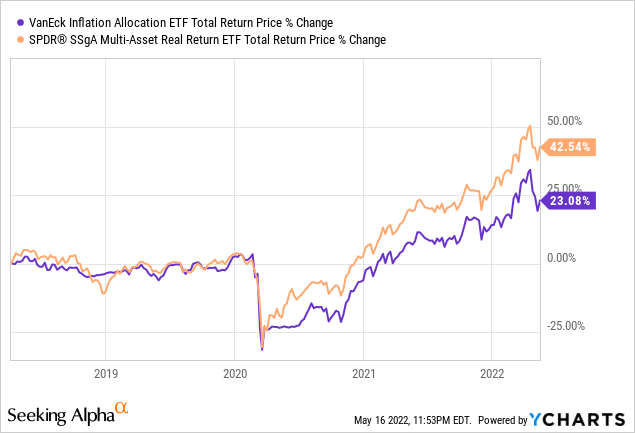 That instance of unsuccessful market timing accounts for most of RAAX's underperformance since inception, but the fund has continued to underperform since. 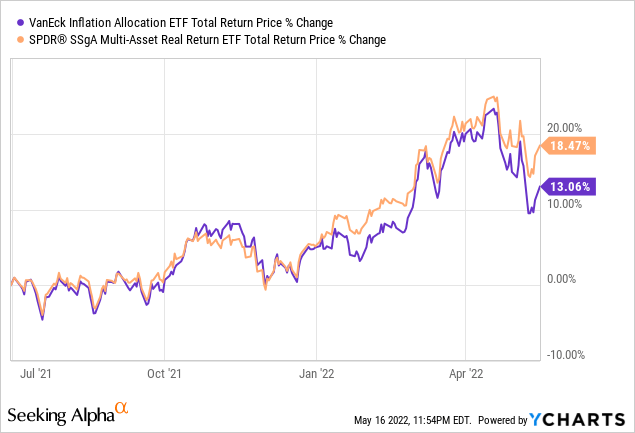 Conclusion - No Reason to Buy

RAAX is a broadly effective inflation hedge ETF, but one with an unsuccessful asset allocation strategy. As there are similar, but broadly superior alternatives to RAAX out there, I would not be investing in the fund at the present time.

At the CEF/ETF Income Laboratory , we manage ~8%-yielding closed-end fund (CEF) and exchange-traded fund (ETF) portfolios to make income investing easy for you. Check out what our members have to say about our service.

To see all that our exclusive membership has to offer, sign up for a free trial by clicking on the button below!