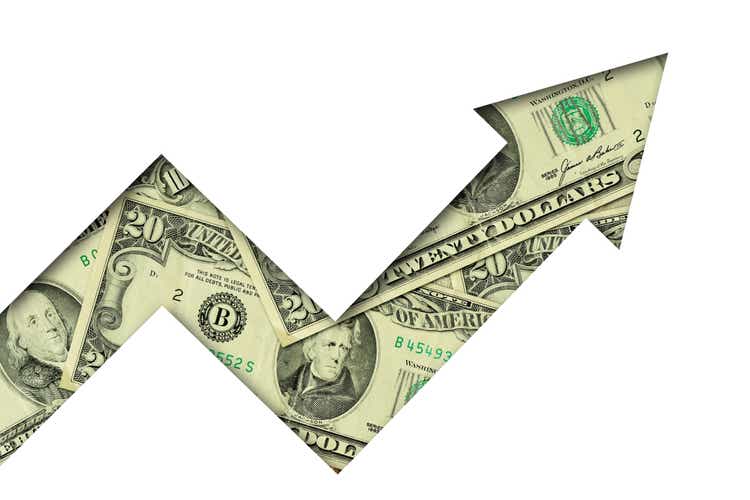 PennantPark Floating Rate Capital (NASDAQ:PFLT) is a business development company that has paid a rather consistent dividend to shareholders. Launching back in 2011, the BDC has never cut its dividend but has increased it on several occasions. I suspect that we won't see any increases for a while, but what it lacks in growth, it can make up for with its 8.76% yield.

As a BDC, the basic concept is quite easy to understand. They will invest by originating loans and investments in smaller companies. They can even work closely with the management team of the other business to help them become more successful. That just helps ensure that their mostly first-lien loans get repaid too.

That's the other benefit to BDCs at this time. They invest in mostly floating rate first-lien loans while issuing debt at fixed-rate costs. PFLT has a sizeable amount of leverage in the form of floating rates, which means it isn't immune to interest cost fluctuations. However, its underlying portfolio is primarily floating rate - which will benefit greatly when higher rates come.

The other general risk for BDCs is they are often investing in financially shaky companies. After all, if they were completely sound, they could get financing through other means that weren't so expensive. That makes them more susceptible to economic conditions. That's why it can be a great thing to find something slow and steady such as PFLT, which had survived through the worst of the COVID pandemic and kept on paying investors.

One of the main selling points, in my opinion, is the steady payout the BDC has delivered to investors. They haven't increased from the $0.095 since it initially paid that amount at the beginning of 2015. However, it also hasn't cut its dividend to shareholders either going back to 2011. What it lacks in growth, it is making up for with a dividend yield of 8.72%. 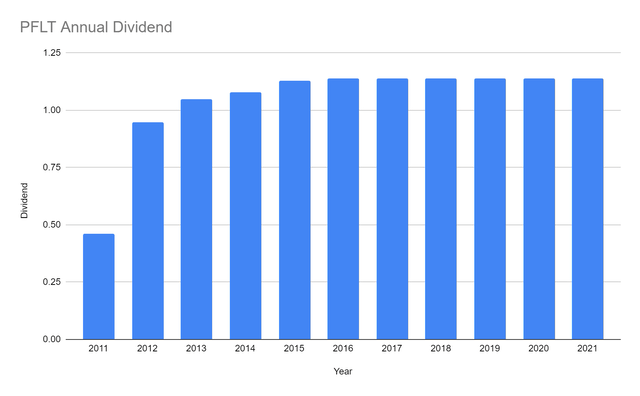 The above shows the annual dividend going back to the launch of the BDC. Starting off in January 2022 comes to little surprise once again, PFLT announced a $0.095 dividend to be paid for the month of February. They pay around the first of the month.

One of the reasons I don't suspect they will raise the dividend is because they can't really. Their coverage has been thin, to flat out being uncovered over the last two years from sources of net investment income ("NII"). NII is typically the gold standard for dividend coverage from BDCs - especially when they have the largest amount of their portfolio invested in loans.

NII is simply the total income that the BDC has received minus expenses. For PFLT, from 2019 to 2020, the total income generated from the underlying portfolio actually increased. It then fell quite dramatically in 2021 as interest payments declined quite materially. At the same time, it was offset to some degree by a sizeable drop in interest and expenses on the debt. Of course, that came about as the Fed slashed rates to 0%. As I mentioned, PFLT actually has a fairly sizeable portion of its debt in a floating rate credit facility.

The above shows us that NAV had risen regardless despite the lack of NII coverage over the last year. That came primarily through some sizeable unrealized gains through 2021. Which makes sense considering it was rebounding from the COVID-induced panic selling of the year prior. Though for the latest quarter, the NAV did slip a bit.

During that period, base management fees and performance-based incentive fees also declined, as they should have. PFLT has some fairly high expenses too, even for a BDC that can frequently see ~10%+ expenses. However, a large portion of this is going to be interest expenses. Of PFLT's 13.32% estimated annual expenses, 5% is from "interest on borrowed funds."

Our stockholders indirectly bear 87.5% of the expenses of our investment in PSSL. No management fee is charged by PennantPark Investment Advisers in connection with PSSL. PSSL pays the Administrator an annual fee of 0.25% of average gross assets under management. For this chart, PSSL fees and operating expenses are based on our share of the actual fees and operating expenses of PSSL for the fiscal year ended September 30, 2021. Expenses for PSSL may fluctuate over time and may be substantially higher or lower in the future.

The asset-backed debt is more complicated;

With all that, the weighted average interest rate comes to 2.6% at the end of September 2021. Although, it is a variable rate that will be tied to LIBOR. So the majority of their underlying leverage is tied to floating rates. On the other hand, the rates will still be lower than what they are investing in.

Since that update, they issued an additional $85 million more in the 4.25% unsecured notes due 2026. That boosts its fixed-rate financing a bit more.

Going forward, this could improve for a couple of reasons. I believe the most obvious reason, and the one with the most sizeable impact, would be higher rates. Higher rates will increase the total income as the rates in the portfolio are mostly tied to LIBOR plus a spread.

Below is the breakdown of the type of debt PFLT is carrying. It is dominated by first-lien senior secured debt that overwhelmingly is floating rate. 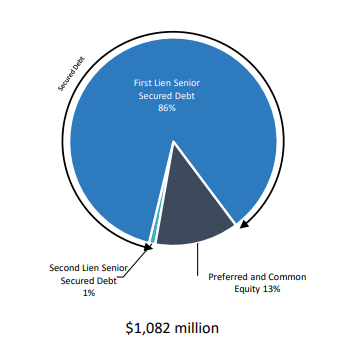 As just covered on the leverage, their interest costs will increase too. But the net result should still be positive. In addition, with the latest leverage, they issued by adding $85 million more in the fixed-rate financing category. That should also boost NII going forward as long as they can invest in something that earns greater than the 4.25% rate. Looking at the rest of their portfolio seems a non-issue.

The main points here are the shortfall can be covered through potential appreciation. However, that isn't always as reliable as NII and requires the management to be smart about things. In addition, the increasing interest rates that are expected over the next year should also increase NII generation.

Some BDCs make specific investments and put significant weighting in certain categories of investments. For PFLT, that isn't the case, and the industry mix is incredibly diverse. This greater diversification means they can be better protected from industry-specific risks. In addition to that, they have greater flexibility to invest wherever the management feels makes the strongest investment choice. 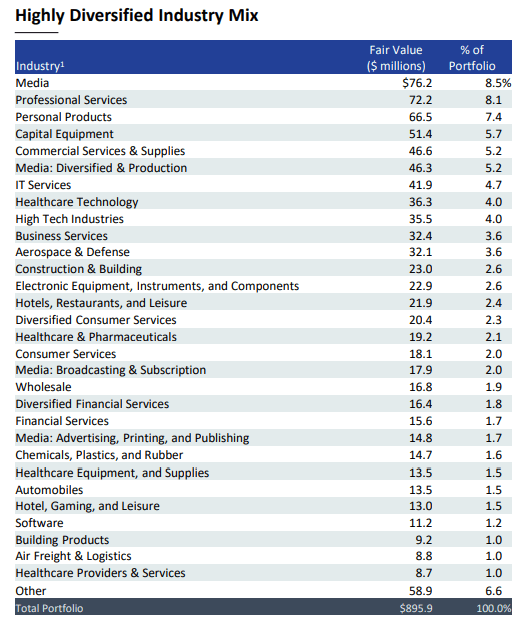 Of course, the only area that they aren't diversified in is their 87% allocation to first-line loans. Overall, they have 110 different companies they had invested in at the end of their last fiscal year. The yield at cost on the debt portfolio was 7.4%, which reiterates the lack of coverage we discussed above. The shortfall can be made up through potential appreciation or increasing NII as we head into a rising rate environment.

Overall, PFLT is a BDC that an income investor can get behind. Growth seems limited in terms of its dividend, but the yield itself is pretty attractive on its own. In terms of the valuation of the BDC, while most seem to be trading at lofty premiums at this time, PFLT remains at a relatively modest 3.65% premium.

That puts it in a bit better of a situation when things can turn sour. While PFLT would most certainly take a hit, its already lower valuation could provide some cushion relative to other names.

However, their declining NII is also something to watch, as they carry a large portion of their debt in floating rates. That could be two factors that are keeping PFLT at a lower valuation in the first place.

They have remedied some of this by issuing more fixed-rate debt recently. That works in favor of potentially increasing NII coverage by generating higher income on the portfolio and putting in more fixed-rate leverage for when rates rise. So it essentially knocks out two birds with one stone.