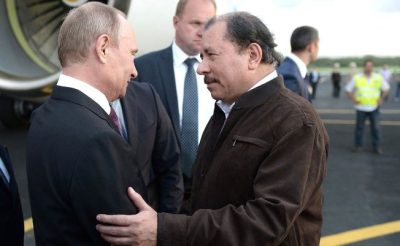 All Global Research articles can be read in 51 languages by activating the “Translate Website” drop down menu on the top banner of our home page (Desktop version).

Nicaraguan President Daniel Ortega permitted the entry of foreign troops, ships and aircraft into the country for humanitarian purposes from the second half of 2022. According to the official government gazette, ships, aircraft and military personnel from the US, Russia, Mexico, Cuba, Venezuela, Guatemala, El Salvador, Honduras and Dominican Republic are authorized to “participate in exercises and exchanges in humanitarian aid operations and search and rescue missions in emergency situations or natural disasters.”

However, why is Russia the only state outside of the Americas in the agreement, especially amid tensions with the US?

The Nicaraguan government believes that the exchange between military forces will be of “mutual benefit in emergency situations” between nations. The gazette also says that the entry of foreign troops was previously planned and coordinated with the Nicaraguan Army, whose members were also allowed to travel to these countries to carry out humanitarian activities.

What makes this allowance all the more interesting is the participation of Russia, signifying just how important Moscow is for Nicaragua, especially as it is the only country from outside the Americas in the agreement.

Recently, Ortega criticized the holding of the Summit of the Americas in Los Angeles (June 6-10), recalling that Cuba, Nicaragua and Venezuela were not invited to event by the Joe Biden administration.

Ortega also linked Washington’s non-invitation for Nicaragua, Venezuela and Cuba to the summit as a foreign policy strategy intended to weaken Russia.

“They want to subdue Russia. They want to subjugate China […] [they’re] thinking the time has come for them to take over the entire planet. And they didn’t realize that’s not possible anymore,” he said.

Nicaragua is currently hosting an elaborate celebration to commemorate the June 12, 1990 declaration of the Russian Federation following the dissolution of the Soviet Union. The event celebrates the close ties the two countries have enjoyed since 1979 when the Sandinista Popular Revolution came to power. Since then, Nicaragua has been a key and strategic ally of Moscow.

This is especially the case since the political ideology of Nicaragua is related to the Soviet position of anti-imperialism and anti-Americanism. Although the governments and presidents of Nicaragua and Russia have changed, support between the two countries remain close and nearly unabated for over 40 years.

Buses in Managua are Russian, for example, as well as agricultural machinery, fertilizers, medicine and wheat. In addition, the two countries are often supporting each other when facing pressure from the US and its allies.

It is recalled that on January 18, Russian President Vladimir Putin expressed his “unwavering support” for the re-election of Ortega and his willingness to contribute to Nicaragua’s economic development. Managua has not hesitated in supporting Moscow’s position on the war in Ukraine, especially as both countries are subject to financial, immigration and political sanctions imposed by the US and the European Union.

According to Nicaraguan Finance and Public Credit Minister Iván Acosta, the West’s policy of sanctions against Russia is causing a “strong” blow to the global economy, with the aggravation of the crisis due to high fuel, fertilizer and energy prices.

“The erroneous, aggressive, sanctions policies [are] affecting major oil producers, in this case Russia, and has caused a very strong impact on one of the leading price products. When we talk about oil, we are talking about diesel, gasoline, fertilizers and other petroleum derivatives, which has a lot of impact on industry, and those prices are transferred to the economy,” he said.

Nicaragua, despite its close ties with Russia, has not escaped the impact of rising oil prices, even though the Ortega government has attempted to contain price inflation aggravated by the West’s anti-Russia sanctions.

Acosta explained that Nicaragua established a strategy to avoid the inflationary impact on the local economy by applying four measures aimed at freezing fuel prices. In this way, a rise in the cost of food, transportation, industry and production has mostly been avoided. The strategy is aimed at stabilizing the price of electricity and for now the Central American country has managed to keep fuel prices frozen for twelve consecutive weeks.

One of the measures is focused on incentivizing production for the increase in exports, which in 2022 could reach $4 billion dollars given the increase in the prices of Nicaragua’s main export products, such as gold, beef and coffee. Ortega said on May 4 that Nicaragua is making “enormous efforts” to contain the rise in fuels, mobilizing millions of dollars in resources that could be used in social programs.

Although Washington is attempting to isolate Nicaragua from the rest of the Americas, other states are wondering what the benefits are since they too are suffering from economic crises and high prices instigated by US-led sanctions against Russia. The Biden-organized Summit has proven to be nothing more but an opportunity for the US and its closest allies to denounce Nicaragua, Venezuela and Cuba rather than dealing with real issues such as poverty, economic stagnation and inflation. In this way, Nicaragua will continue to maintain extremely close relations with Russia.

Featured image is from InfoBrics