A couple have revealed how they managed to break into the property market and ditch their lives in the fast lane by buying a tiny house for their young family.

Fatima, 33, and Croyden, 35, Wheeler moved from their pricey rental in Labrador, on the Gold Coast, in August 2020 and haven't looked back since.

Speaking to FEMAIL Fatima revealed the couple's fitness business took a hit in the early days of the pandemic, forcing them to take a good look at their finances. 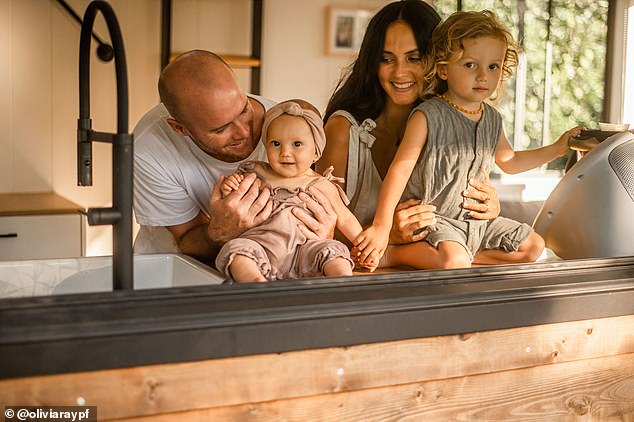 Fatima and Croyden Wheeler decided to move into a tiny house on the Gold Coast in August 2020 - they are pictured with their son Zephyr, two, and daughter Zola who was born at the house eight months ago 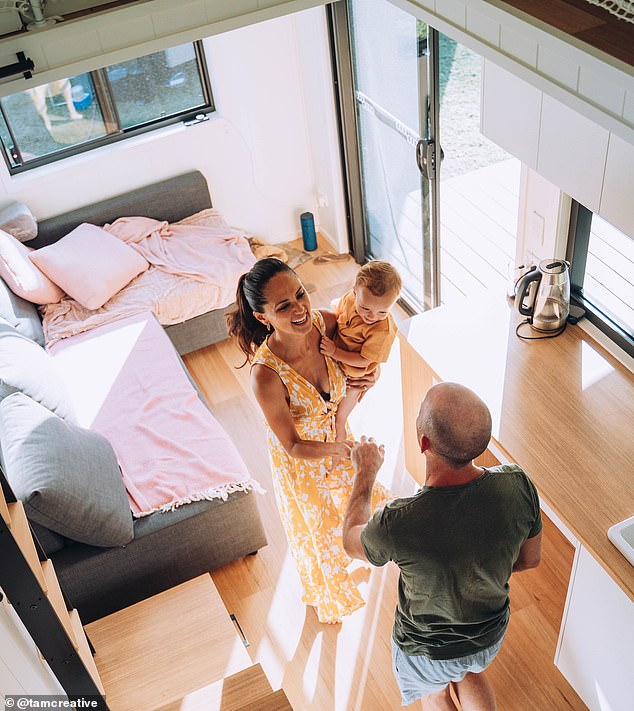 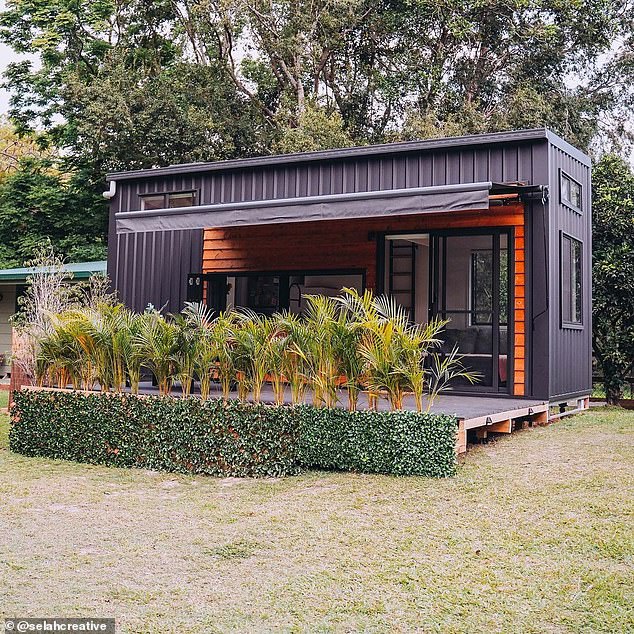 'We knew we couldn't keep paying this rent, thousands of dollars a month, when all our clients were dropping off,' she said.

Their solution: to pool their funds and buy a $100,000 tiny home which would allow them to live off the grid with infant son Zephyr, now 2.

'It was great for us because it meant we could have our own home, mortgage-free,' Fatima said.

They then searched for some land to park their new home - sending dozens of requests to people with acreages in their preferred districts.

And to their delight one landowner replied, offering them a prime water-front spot for just $200-per-week which includes town water and electricity.

'The land lease we have is magic, we love being by the river,' Fatima said, 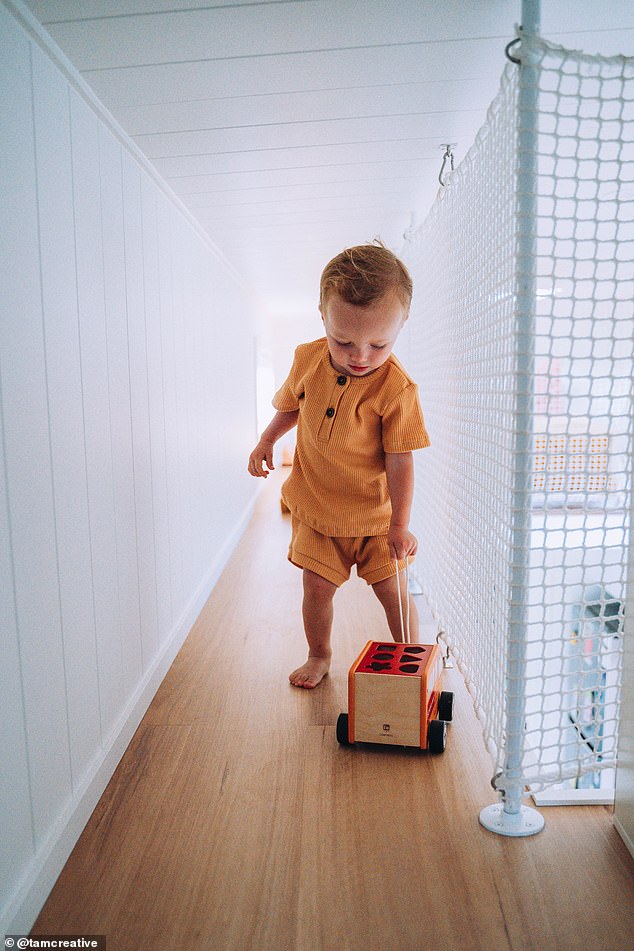 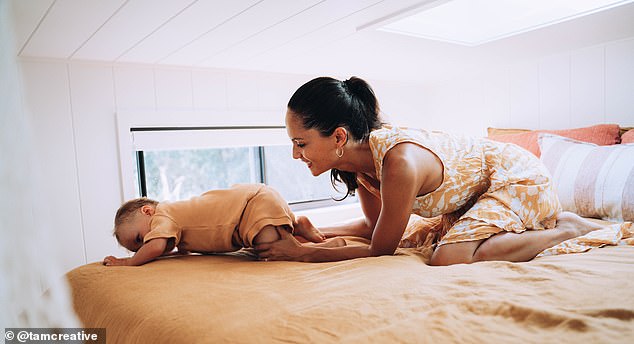 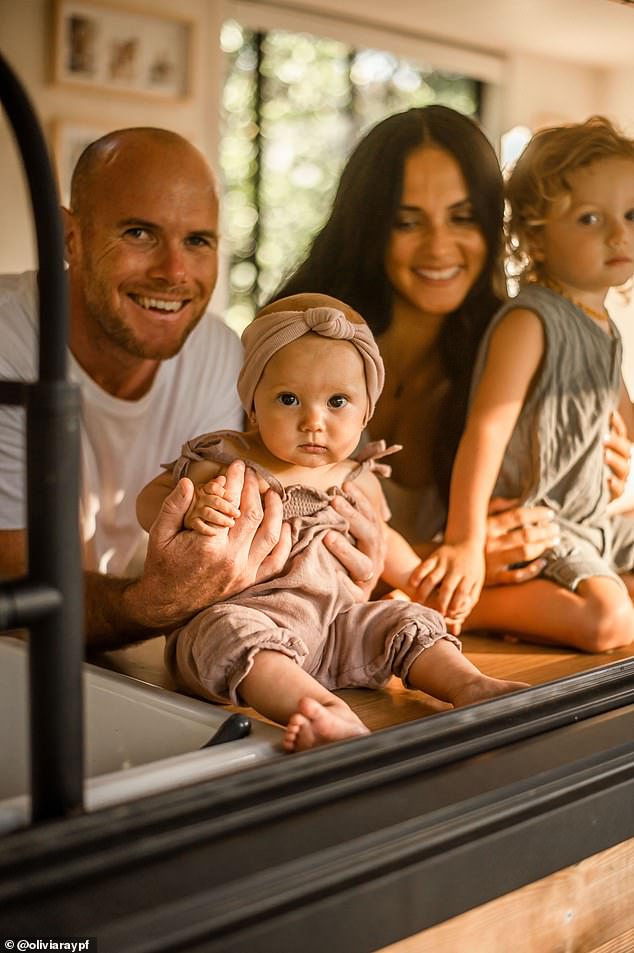 It took three months for the couple to finalise the details, have their new two-bedroom home built and transition away from being highly-strung business owners.

'We are working less and have more time with our family. Croyden is helping a friend with his gardening business and I have got my own business facilitating mother's blessing ceremonies - which is an alternative to baby showers,' she said.

Croyden's experience landscaping meant he could extend the family's living area by building a deck and planting a garden.

'I love living here, I love how easy it is to clean and it is super homely and comfortable.'

House rent rises in Australia's capital cities during the past year

The Gold Coast has also seen a steep increase 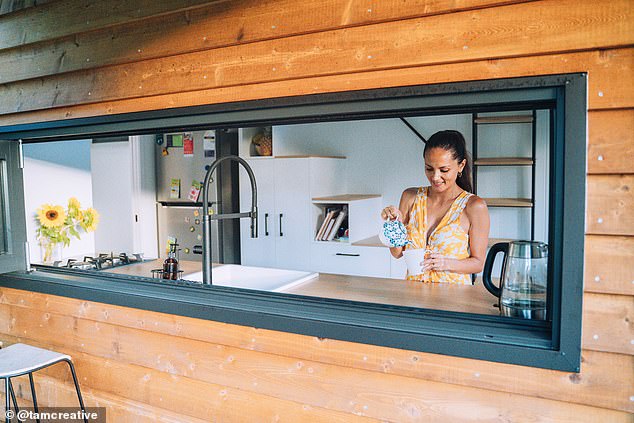 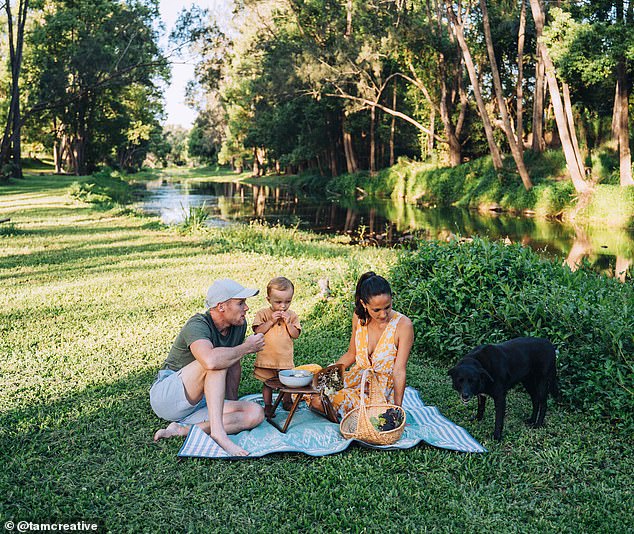 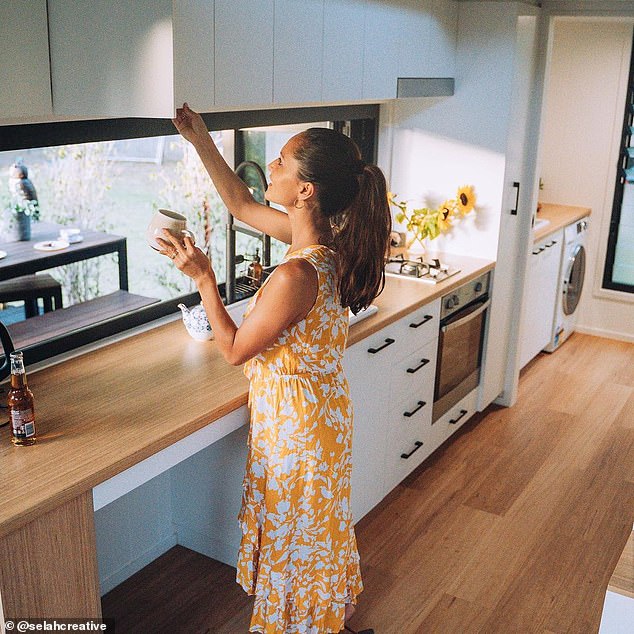 Just over a year after moving into the home the family of three welcomed a new addition, Zola.

The baby girl was born on the property in a purpose-built space next to the family's home.

'It was the best day of my life,' Fatima said.

And it appears the tiny home is still big enough for the family-of-four who are thriving. 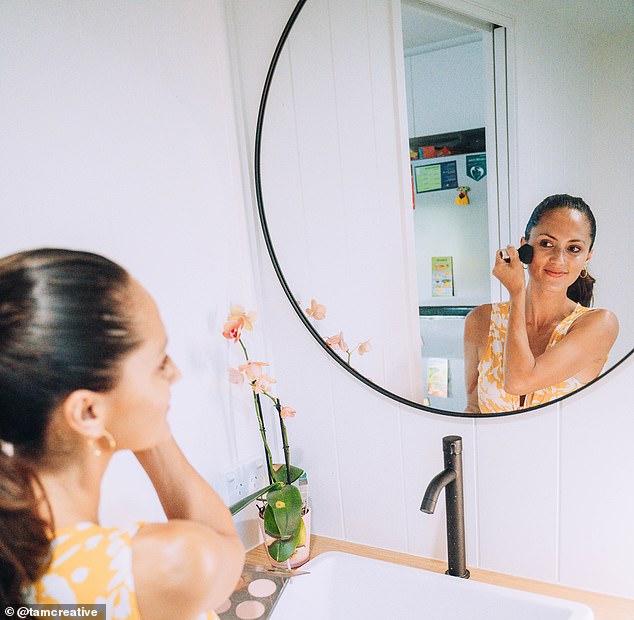 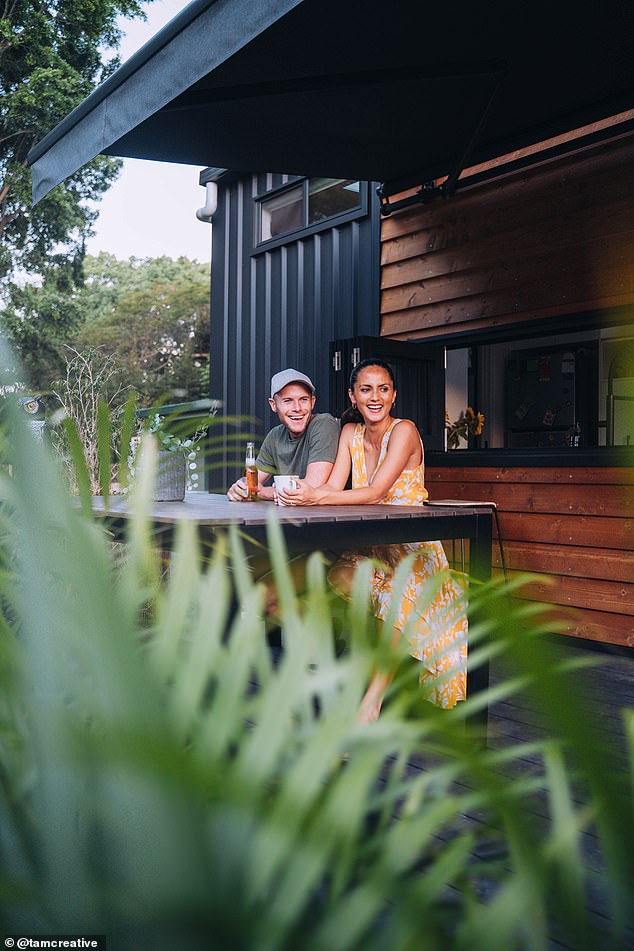 'Our babies love crawling around the loft area together,' she said.

But it isn't always easy - the recent wet weather has meant the family haven't been able to spend as much time outside as usual.

'Rainy days are tough. With two little ones we find it a little difficult to keep inside all day however we have family down the road so we can always go there,' she said.

The mum says the space can also get messy quickly - but that it isn't a big deal because it doesn't take long to clean. 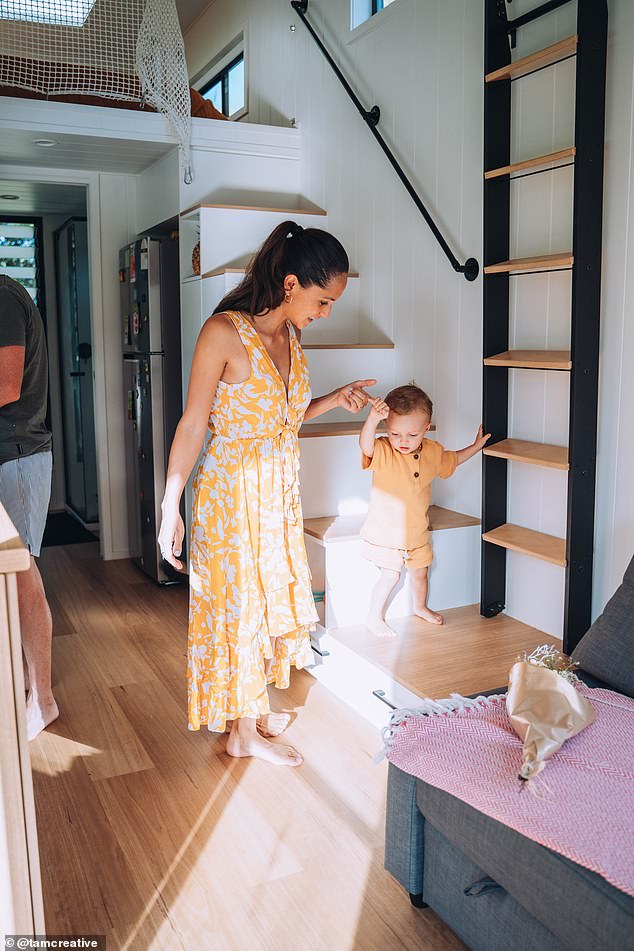 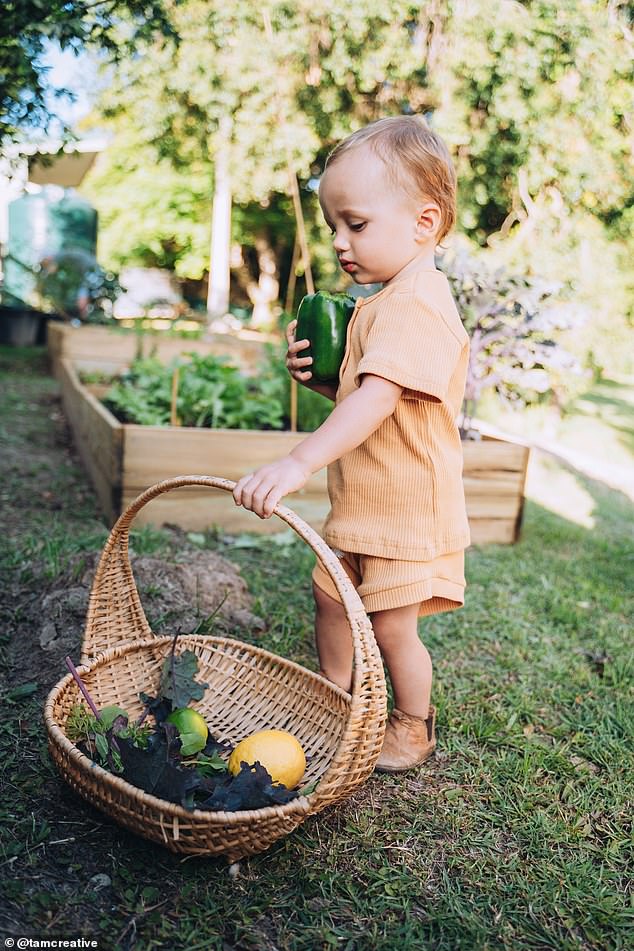 Her children are also able to help in the garden and love growing their own vegetables.

Fatima and Croyden have a changed outlook on life now and are looking forward to travelling with their children before they head to school.

They have been able to save money on rent since moving to the plot and will soon set off to Mexico - the starting point for a year of travel. 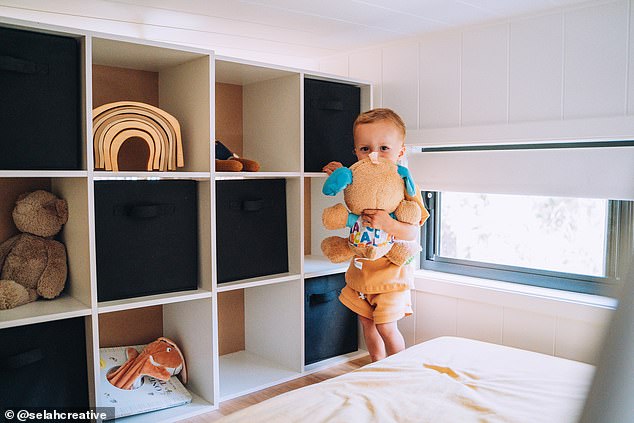 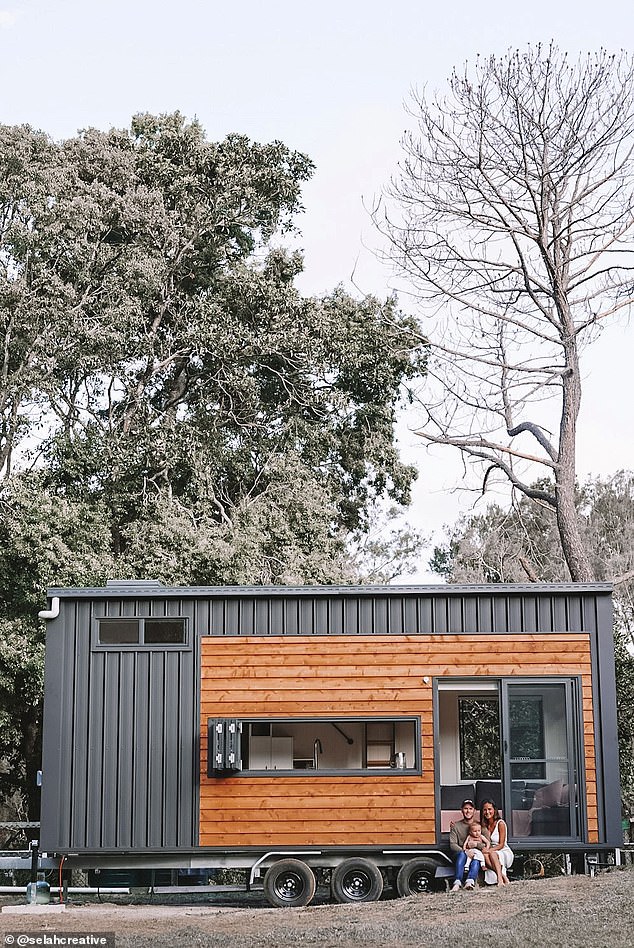 The couples house on wheels was built by Queensland company, Aussie Tiny Houses, which have been making tiny homes for five years.

A similar tiny house would cost about $140,000 more now, due to increased demand and a shortage in labour and supplies across the building image.

What regulations apply to having a tiny house in Australia?

At the moment there is no uniform law when it comes to tiny houses in Australia.

Each state has different rules, and many councils have their own guidelines which must be met.

Some general rules by state are below:

A tiny house can be either:

A- a small dwelling house under 50m2 built on the lot; or

B - a small dwelling house built on a trailer (similar to a caravan).

As the tiny house is built on a trailer it has the capability of being registered under the Road Transport Act. Tiny dwellings can be designed and built using green principles and provide affordable housing whilst minimising the urban footprint.

They are emerging in varying forms and locations, such as granny flats (or secondary dwellings) to complement existing housing, groupings of dwellings in established urban areas, converted sheds and beach shacks on larger, isolated properties, and in mobile caravan formats.

In most cases, if a tiny house is RMS registered as a trailer, no DA approval is required to put it in your backyard or on your property, if you meet certain exemptions.

In summary, NSW legislation may permit you to have no more than two caravans, campervans or tents if you plan for someone to stay in them for a short-term (up to 48 hours at a time) for no more than 60 days a year.

Or you can have no more than one caravan, campervan or tent if you plan to have someone that is a member of your household live in it on a long-term basis, only when you have an approved dwelling house already on the lot. The tiny house is to be maintained in a safe and healthy condition.

1) Setting up in the backyard

A tiny house on the same lot as a 'main dwelling' can be classified as a granny flat. Granny flats have their own size and structure regulations (set by the local council).

While you'll need to get a granny flat approved by a private certifier, you won't necessarily have to get council approval, which is a huge advantage of choosing this option.

Just be careful that the combined number of occupants in the tiny house and main property doesn't exceed the local council's limits. In Brisbane, for example, only five unrelated people are allowed to dwell on the same lot.

2) Setting up on a vacant lot

If you build your tiny house on a vacant lot, you'll need to have your construction approved by the local council. This means you'll have to conform to the building codes that apply to regular houses including minimum sizes, smoke alarm rules, plumbing and electrical standards and more.

Once your home has wheels it is no longer a 'permanent structure' and instead is classified as a caravan or light truck.

No matter where you roam in Australia, you'll need to comply with the Motor Vehicle Standards Act 1989.

In addition to this, you'll need to comply with state laws relating to movable dwellings. In Queensland, these include the Residential Tenancies and Rooming Accommodation Act 2008 and the Transport Operations (Road Use Management) Act 1995.

There are currently three main options in Victoria for locating a tiny house:

1) In a backyard as a 'dependent person's unit'. More commonly known as a 'granny flat', the unit must be moveable and house a genuine dependent.

2) As an approved second dwelling on your lot. This option requires a planning permit as well as compliance with Rescode and the building code. This option is difficult, if not impossible, to achieve as current planning policies refer to dwellings of regular size rather than tiny houses and the creation of tiny house lots would be similarly onerous.