There’s a new MacBook Air on the way that’s been completely revised, not just on the inside, but for the first time in years, also the outside. The 2022 MacBook Air has a better chip, bigger display and a brand new design. But if you look in the Apple Store you will notice you can still buy the predecessor. Is it worth spending more to get the new model? We look at how the M2 MacBook Air compares to the M1 MacBook Air from 2020, examining how much more powerful the new model is, and whether that extra oomph is worth the premium price.

The new Macbook Air is certainly an eye-catcher and stands out clearly from its predecessor. Similar to the updated MacBook Pro, the new MacBook Air has gained a brand new design that includes a bigger screen as well as new color finishes. But it still has a similar footprint to the M1 model:

The width of the two laptops is the same, which makes sense because it allows for a full-size keyboard. The M2 model is a few millimeters deeper to allow for a larger screen and on average, this model is narrower than before – although it’s not tapered so the smallest edge isn’t as slim as it was.

While the tapered design allowed Apple to make a light laptop, it was also a disadvantage, as it meant less space for ports on the outside and limited space on the inside for heat dispersion. Despite the difference in design, however, both models are fanless, which could be a disadvantage to power users. 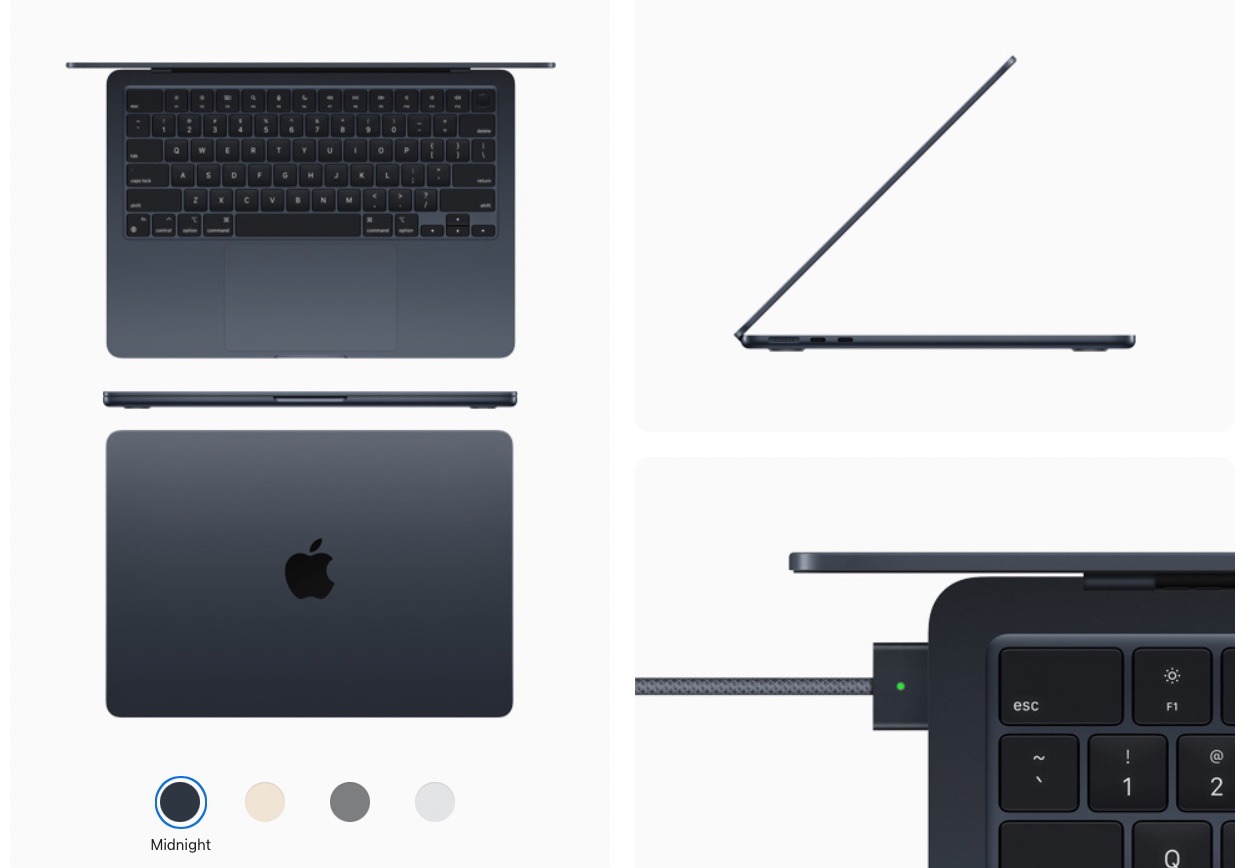 The new MacBook Air comes in a fresh Midnight color.

Rumors that the new MacBook Air was losing its tapered design proved correct, but any hopes that this would mean more ports have been scuppered. The M2 MacBook Air has the same two Thunderbolt/USB 4 ports as its predecessor and doesn’t have an HDMI port like the 14-inch or 16-inch MacBook Pro. The new model adds MagSafe for charging to free up a Thunderbolt port, but otherwise, both models are the same: Touch ID, two Thunderbolt/USB 4 ports, 802.11ax, Wi-Fi 6, and Bluetooth 5.0.

Another big difference is the color options. The M2 models have a choice of Midnight (bluish-black) and Starlight (pale gold), as well as space gray and silver (which looks slightly paler than the previous shade). The 2020 MacBook Air comes in space gray, silver, and gold.

The other eye-catching difference between the M1 and M2 models is the addition of a notch for the camera. Like the 14-inch and 16-inch MacBook Pros, the M2 MacBook Air has very slim bezels that can’t quite fit the camera. When the notch arrived on the larger MacBook Pro models in 2021 there was some criticism, but if you consider that Apple has added screen space on either side of the notch and made the display taller, you’re not actually losing any space. 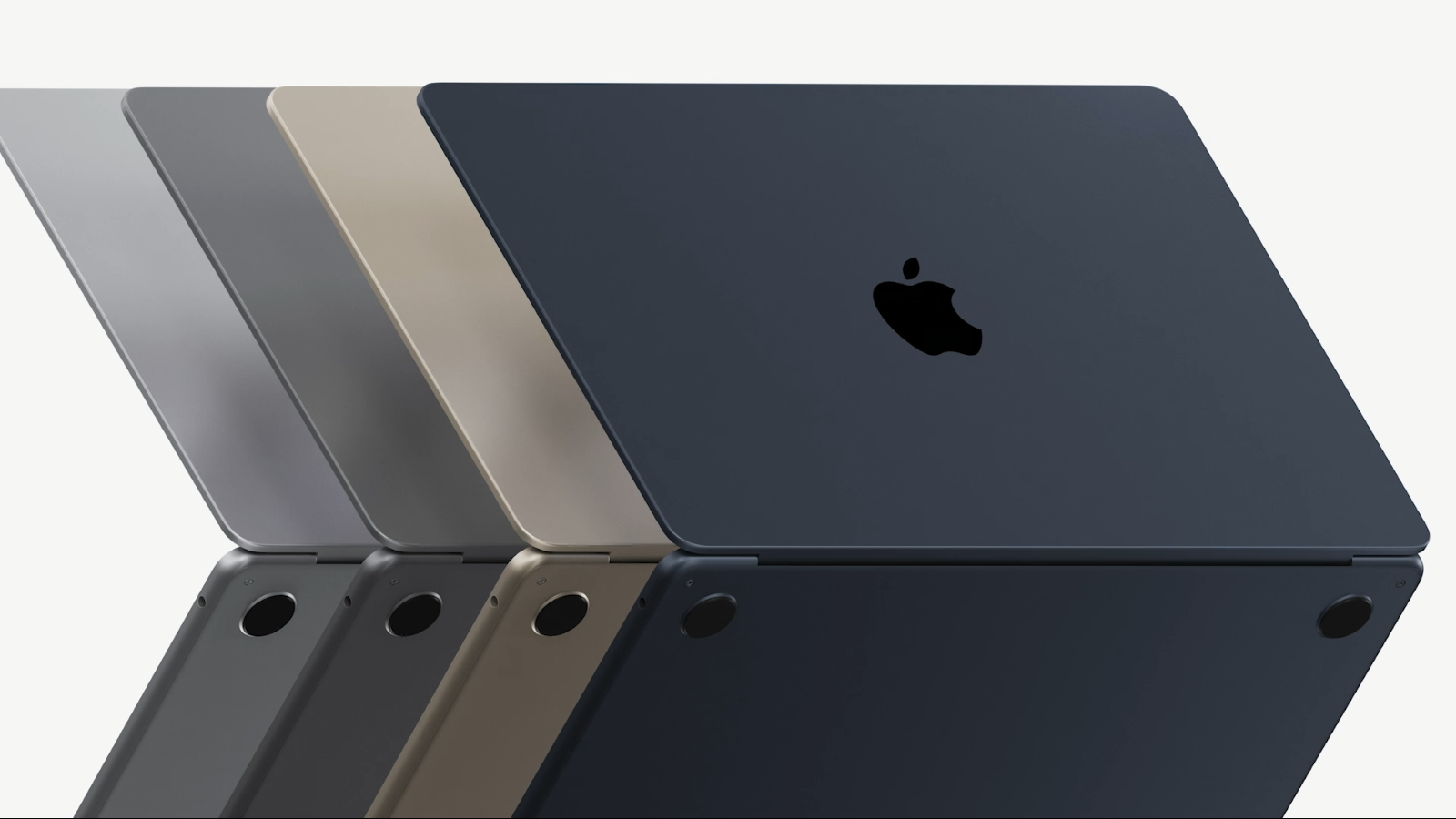 The display size is the other key difference between the new M1 and M2 MacBook Air. The 2022 model has a 13.6-inch display, compared to the 13.3-inch display on the M1 model. The new model is also brighter:

The brighter screen brings it into line with the 13-inch MacBook Pro, but places it far below that of the 14-inch and 16-inch MacBook Pro models with 1,000 nits of max brightness. It also lacks the ProMotion technology of those models. 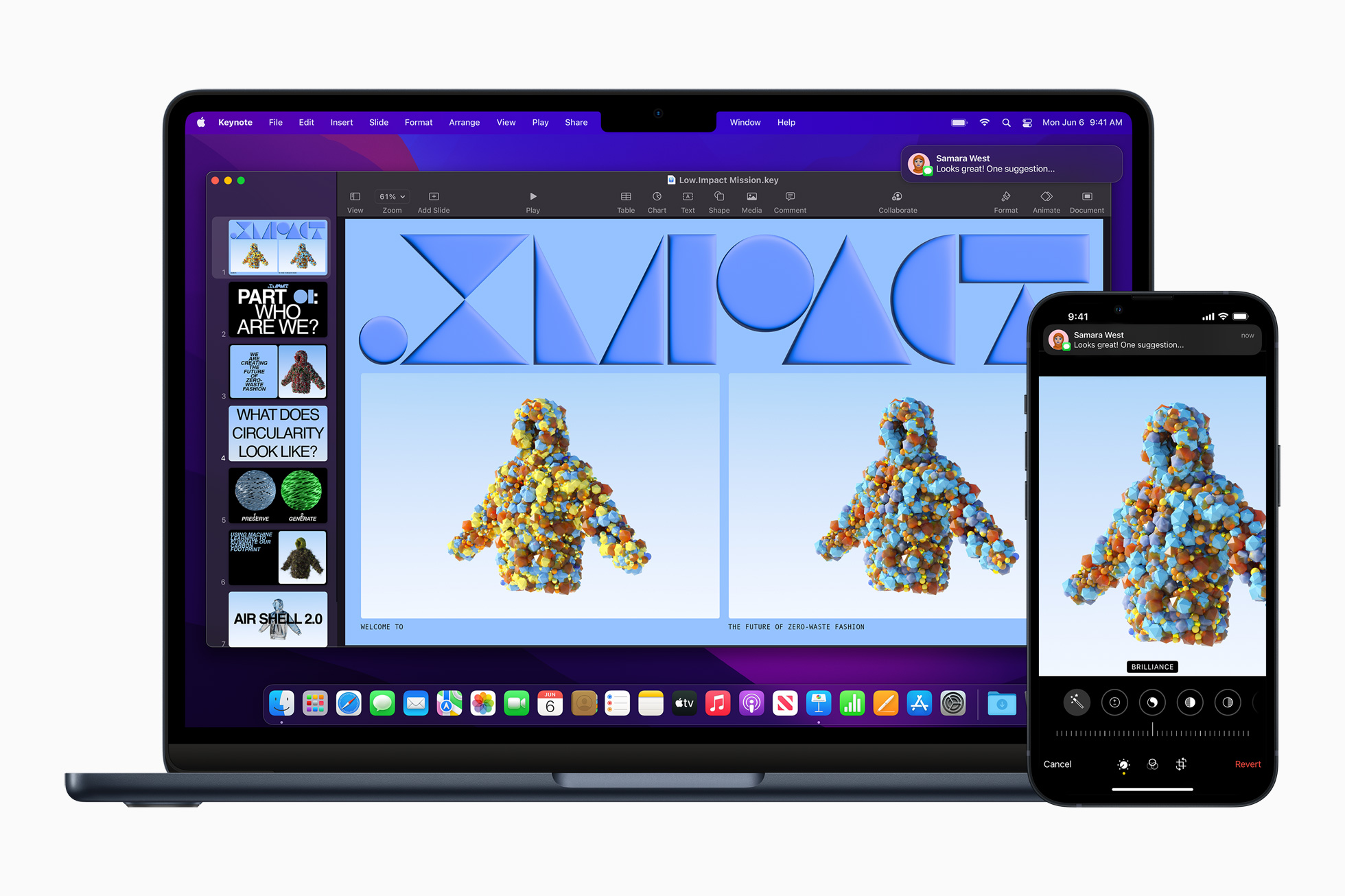 The new MacBook Air has a notch. It’s not so bad, you’ll get used to it.

Thanks to these changes the display of the M2 MacBook Air isn’t only better than its predecessor—it’s also better than the 13-inch MacBook Pro. In everyday life, however, these differences will rarely be noticeable, although the increased brightness is a plus. The better color representation, on the other hand, will be a benefit for professional design work.

We’ll look into those components in more detail below:

Like the M1, the M2 has four performance cores and four efficiency cores, for a total of 8 CPU cores, but the efficiency cores have been enhanced and there is a larger cache (16MB rather than 12MB). As a result clock speeds can be faster and you can expect improved multithreaded performance compared to the M1. In our testing, the M2 has an 18 percent faster CPU than the M1.

The new chip doesn’t just mean that the new Macs can accomplish more though, they use less power doing so: Apple promises an increased CPU performance of 18 percent with the same energy consumption thanks to various optimizations.

The higher-end M2 with 10 GPU cores offers a 35 percent more powerful GPU than the M1, based on benchmarks. However, the base model of the M2 Air has a slightly lesser GPU with only 8 GPU cores, so we expect the gains to be less with the $1,199 model.

Another factor aiding the M2’s graphics prowess is the addition of engines specifically for video editing in the M2. Plus Apple claims that the Neural Engine is 40 percent faster than in the M1.

While the standard memory offered by both the M1 and M2 MacBook Pro is the same: 8GB Unified Memory, the performance is not the same. According to Apple, the M2 delivers 50 percent more memory bandwidth compared to M1 (100GB/s memory bandwidth) so there should be some noticeable improvements.

But the biggest difference is the amount of memory. Where the M1 MacBook Air tops off at 16GB memory, the M2 MacBook Air can take as much as 24GB. That’s still less than the 32GB of the M1 Pro models, but it’s an improvement and will no doubt please those who were concerned that 16GB wasn’t enough.

The webcam in the M2 supports a resolution of 1080p, which is significantly better than the low-grade 720p FaceTime HD camera in the M1 MacBook Air. That leaves the M1 MacBook Air and M2 MacBook Pro as the only laptops with the old camera.

The speakers have also been updated in the M2 MacBook Air. Instead of relying on a stereo system, the 2022 MacBook Air features four speakers with support for 3D audio, aka Spatial Audio. In addition, the 3.5mm headphone jack offers advanced support for high-impedance headphone.

With a new 67W power supply (sold separately for $20 with the 8-core GPU model, or a free option with the 10-core GPU model) you can quickly charge the M2 MacBook Air to 50 percent charge in 30 minutes. The M2 MacBook Air charges via the magnetically attached MagSafe port, so you no longer have to worry about pulling your MacBook off a desk when you stumble over the cable. There’s a 30W USB-C Power Adapter (included with the 8-core GPU M2 and the choice of a more compact 35W Dual USB-C Port Compact Power Adapter (with the 10-core GPU M2).

The new model offers a M2 processor with more GPU cores, a bigger screen, and a brand new design for just $200 more than the M1 model. This looks like a great deal. However, that viewpoint depends on where in the world you are based. Outside the US the price comparisons aren’t quite so favourable (in the UK there’s a £250 difference, in Europe a €300 difference, and in Australia a AU$400 difference).

In the US the new model also looks like an excellent deal in comparison to the one it replaces: at $1,199 it replaces a M1 MacBook Air model that previously cost $1,249. However, elsewhere in the world the price of the M2 model is either the same as before, or more than it was. In the UK the price remains at £1,249, in Europe the price is €100 more at €1,499, while in Australia it’s now up AU$50 at AU$1,899. Obviously currency-based price fluctuations are to be expected during these uncertain economic times, but it does mean that the decision of whether something is a good price or not is very much relative to where you live.

It should also be noted that where this M1 MacBook Air with 8-core GPU had a 512GB SSD, the M2 MacBook Air that has taken its place only offers a 256GB SSD, which may be reflected in Apple’s price reduction, at least in the US.

The MacBook Air with M2 is in many respects a significant improvement over its predecessor. It offers better performance, a more modern design, an improved display, and some smaller but notable improvements.

If you are one of those users who use the MacBook primarily for everyday tasks, such as surfing the web, reading emails or watching videos, you should consider whether the new design is worth it compared to the cheaper $999/£999 M1 MacBook Air. A M1 Macbook Air will be able to handle all these tasks without any problems.

But if you do more with your MacBook or use it for professional applications such as video editing or photo editing, the M2 MacBook Air is definitely worth the extra money compared to its predecessor. In fact, if your budget allows, we recommend jumping to the higher-end model with a 10-core GPU for the extra storage and better graphics. And as always, you should buy as much memory as you can afford

The M1 MacBook Air is definitely a good machine even at more than a year and a half old, but you’ll be much happier with the newer MacBook Air in a year or two.