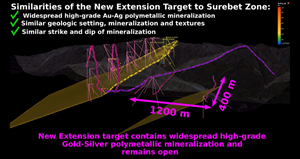 TORONTO, May 18, 2022 (GLOBE NEWSWIRE) -- Goliath Resources Limited (TSX-V: GOT) (OTCQB: GOTRF) (FSE: B4IF) (the “Company” or “Goliath”) is pleased to report it has mobilized for its planned 24,000 meter diamond drill campaign on its extensive high-grade gold-silver discovery at its 100% controlled Golddigger Project. It is designed for infill drilling as well as testing the outer extremities to depth at the newly discovered Surebet Zone. This new discovery is on tide water in a world class geological setting near Stewart, BC in the Golden Triangle of British Columbia. The Homestake Ridge Deposit Dolly Varden Silver Mine (Dolly Varden Silver Corp.), and the Kinskuch Project (Hecla Mining Company) are in close proximity.

Goliath has planned for a 24,000 meter drill campaign totaling 85 holes from 24 separate drill pads targeting the extensive high-grade gold-silver structure discovery exposed at surface at the Surebet Zone both along strike and to depth. The maiden 2021 drill campaign had a 100% hit ratio as all 24 holes totaling 5,332 meters intercepted significant widths of high-grade gold-silver over 1km of strike and confirmed 1.1km of down-dip extent.

Mr. Roger Rosmus, CEO of Goliath states: “We are very pleased to have mobilized for our aggressive 2022 drill campaign at our newly discovered Surebet Zone. This new discovery has already demonstrated to be an extensive robust system that is structurally controlled down-dips 1.2 km confirmed by drilling in 2021. We have identified multiple strong drill targets focussed on significantly expanding the potential size of this system that remains open. The Golddigger property is in geo-political safe jurisdiction and key geologic setting where many world-class deposits have been discovered. The Surebet Zone potential has been compared to the past producing high-grade Silbak Premier Mine just to the north and certainly has the early makings of the next big discovery in the Golden Triangle. We look forward to reporting our drilling results with much anticipation.”

The Golddigger Property is 100 % controlled covering an area of 23,859 hectares (59,646 acres or 239 square-kilometers) and is in the world class geological setting of the Eskay Rift within the Golden Triangle, British Columbia and within 2 km of the Red Line that is host to multiple world class deposits. The property is on tide water 30 kilometers southeast of Stewart, British Columbia. The Homestake Ridge Deposit Dolly Varden Silver Mine (Dolly Varden Silver Corp.), and the Kinskuch Project (Hecla Mining Company) are in close proximity.

Rein Turna, P. Geo, is the qualified person as defined by National Instrument 43-101, for Goliath Resources Ltd projects, and supervised the preparation of, and has reviewed and approved, the technical information in this release.

All rock, channel and talus fine samples were crushed and pulverized at MSALABS’s laboratory in Terrace, BC. MSALABS is either Certified to ISO 9001:2008 or Accredited to ISO 17025:2005 in all of its locations. The resulting sample pulps were analyzed for gold by fire assay and metallic screen fire assay in Langley, BC. The pulps were also assayed using multi-element aqua regia digestion at MSALABS’s laboratory in Langley, BC. The coarse reject portions of the rock samples, as well as the pulps, were shipped to Goliath Resources Ltd.’s storage facility in Terrace, BC. All samples were analyzed using MSALABS’s assay procedure ICP-130, a 1:1:1 aqua regia digestion with inductively-coupled plasma atomic emission spectrometry (ICP-AES) or inductively-coupled plasma mass spectrometry (ICP-MS) finish for 35 elements as well as the FAS-121 lead collection fire assay fusion procedure with atomic absorption spectroscopy (AAS) finish. Any results greater than 100 ppm for silver or 10,000 ppm copper, lead and zinc were additionally assayed using MSALABS’s ICA-6xx method particular to each element. This method used an HNO3-HCl digestion followed by ICP-AES (or titrimetric and gravimetric analysis). Gold values of greater than 10 ppm Au were assayed by the FAS-425 method which includes a fire-assay fusion procedure with a gravimetric finish. Samples with Au greater than 5 ppm were additionally analyzed using metallic screen fire assay with MSALABS’s MSC-150 or MSC-350 method. QA/QC samples including blanks, standards, and duplicate samples were inserted regularly into the sample sequence.

The reader is cautioned that grab samples are spot samples which are typically, but not exclusively, constrained to mineralization. Grab samples are selective in nature and collected to determine the presence or absence of mineralization and are not intended to be representative of the material sampled.

Goliath Resources Limited is an explorer of precious metals projects in the prolific Golden Triangle of northwestern British Columbia and Abitibi Greenstone Belt of Quebec. All of its projects are in world class geological settings and geopolitical safe jurisdictions amenable to mining in Canada.

* Widths are reported in drill core lengths and the true widths are not known. AuEq metal values are calculated using: Au 1792.60 USD/oz, Ag 23.13 USD/oz, Cu 4.37 USD/lbs, Pb 1.05 USD/lbs and Zn 1.52 USD/lbs on November 28, 2021. There is potential for economic recovery of gold, silver, copper, lead, and zinc from these occurrences based on other mining and exploration projects in the same Golden Triangle Mining Camp where Goliath’s project is located such as the Homestake Ridge Gold Project (Auryn Resources Technical Report, Updated Mineral Resource Estimate and Preliminary Economic Assessment on the Homestake Ridge Gold Project, prepared by Minefill Services Inc. (Bothell, Washington), dated May 29, 2020. Here, AuEq values were calculated using 3-year running averages for metal price, and included provisions for metallurgical recoveries, treatment charges, refining costs, and transportation. Recoveries for Gold were 85.5%, Silver at 74.6%, Copper at 74.6% and Lead at 45.3%. It will be assumed that Zinc can be recovered with the Copper at the same recovery rate of 74.6%. The quoted reference of metallurgical recoveries is not from Goliath’s Golddigger Project, Surebet Zone mineralization, and there is no guarantee that such recoveries will ever be achieved, unless detailed metallurgical work such as in a Feasibility Study can be eventually completed on the Golddigger Project.

Certain statements contained in this press release constitute forward-looking information. These statements relate to future events or future performance. The use of any of the words “could”, “intend”, “expect”, “believe”, “will”, “projected”, “estimated” and similar expressions and statements relating to matters that are not historical facts are intended to identify forward-looking information and are based on Goliath’s current belief or assumptions as to the outcome and timing of such future events. Actual future results may differ materially. In particular, this release contains forward-looking information relating to, among other things, the ability of Company to complete the financings and its ability to build value for its shareholders as it develops its mining properties. Various assumptions or factors are typically applied in drawing conclusions or making the forecasts or projections set out in forward-looking information. Those assumptions and factors are based on information currently available to Goliath. Although such statements are based on management’s reasonable assumptions, there can be no assurance that the proposed transactions will occur, or that if the proposed transactions do occur, will be completed on the terms described above.

NOT FOR DISSEMINATION IN THE UNITED STATES OR FOR DISTRIBUTION TO U.S. NEWSWIRE SERVICES

AND DOES NOT CONSTITUTE AN OFFER OF THE SECURITIES DESCRIBED HEREIN.