First Mover Asia: For the Metaverse to Be a $13T Opportunity, Much Has to Change; Bitcoin Rises Late Past $31K

Prices: A late surge carried bitcoin past $31,000, where it started the week.

Insights: A Citi report calculates the potential value of the metaverse at $13 trillion, but platforms are struggling to attract committed users.

Technician's take: Price bounces have been short-lived, indicating a loss of buying strength.

Catch the latest episodes of CoinDesk TV for insightful interviews with crypto industry leaders and analysis. And sign up for First Mover, our daily newsletter putting the latest moves in crypto markets in context.

The largest cryptocurrency by market capitalization was trading above $31,200, about flat over the previous 24 hours but well up from its temporary perch below $29,300 in early Tuesday morning U.S. trading. Bitcoin had plummeted late Monday and has continued to trade in a choppy range amid widespread investor anxiety about inflation, geopolitical turmoil and the global economy.

Ether, the second-largest crypto, was recently down over 1%, trading just above the $1,800 level. Other major altcoins were mixed with SOL off more than 7% but LINK up over 8%. Sentiment remained bearish.

“The markets are continuing the long-term downtrend, but the recent crypto-friendly bill in the U.S. is giving short-term support as it proposes to gut the infamously over-reaching [Securities and Exchange Commission] in terms of their jurisdiction over crypto," James Key, CEO of Web 3 protocol Autonomy Network, told CoinDesk.

Equity markets, which have swung up and down in recent days as investors digested a few upbeat tidbits along with their recent diet of bad news, climbed on Tuesday with the tech-heavy Nasdaq, SP 500 and Dow Jones Industrial Average all up more than a half-percentage point.

Still, investors had plenty to worry them on Tuesday. The World Bank ratcheted back its 2022 forecast for global economic growth to 2.9% from the 4.1% it predicted in January. World Bank Group President David Malpass called "the risk" of stagflation "considerable.” Later in the day, U.S. Treasury Secretary Janet Yellen told the Senate Finance Committee that she expected inflation to remain high. And less than three weeks after posting disappointing first-quarter results, Target warned investors that its profits would fall because of changing consumer behavior that has created imbalances in its inventory.

Many analysts expect the crypto bear market to worsen in the near future, and Key noted that bitcoin's previous down cycles had bottomed out after 85% drops in value over at least 18 month periods. The current market has lost close to 60% of its value since reaching an all-time high last November.

“I really doubt this is the bottom," Key said. "In addition, those previous cycles were all in a long-term equities bull market, whereas that isn't true for the first time ever. When institutional investors are de-risking, 'exotic' and risky assets like crypto are the first to be sold, which indicates this time has the potential to be a worse bear market."

A recent report from Citi has calculated the total addressable market value of the metaverse at $13 trillion.

If realized, this would be an impressive achievement considering that the value of the gaming market is only $180 billion, according to gaming research house NewZoo, and the market for PC gaming hardware is only $5.7 billion.

For the most part, the Metaverse market is just a worse-performing version of the gaming market. Metaverse exchange-traded funds (ETF), with their exposure to publicly listed crypto companies, have lagged behind their gaming counterparts on the market – despite being mostly the same thing.

Citi argues the $13 trillion figure comes from all “internet-related revenue to that of the physical-world activities being displaced.” This makes some massive assumptions about the future of e-commerce because it implies that all parts of the e-commerce stack are going to be disrupted by the metaverse.

This seems to almost parallel the bullish mentality from augmented reality (AR) back in the late 2010s. If you would have listened to VCs and research companies, AR was ready to make unicorns by the dozens as mobile-driven augmented reality was ready to disrupt so many parts of the internet economy from gaming to advertising.

But the AR space failed to generate any useful unicorns. Blippar, a promising London-based startup that melded artificial intelligence (AI) and AR, went insolvent in late 2018 after raising $37 million at a billion-dollar valuation.

The app promised to revolutionize e-commerce by allowing users to point their phone at any object and get all the info the app could gather from visual recognition and online searches. It could also be used to provide augmented, 3D visualizations of products enhancing the online sales opportunities for retailers. This was all very interesting and promising for new revenue models, but the user base never materialized.

Aside from Blippar, Magic Leap, which came out with promising initial visuals that it never managed to deliver upon, sucked the life out from capital markets for AR, depriving many promising AR startups of their means to create this promised augmented reality. Despite the success of Pokemon Go, there just wasn’t another AR unicorn like it.

Going back to Citi’s metaverse predictions, much like the bull market around AR in the late 2010s, something is missing: users. On-chain data shows that despite lofty valuations, the metaverse majors struggle to build a user base with some only having a few thousand at most compared to the tens of millions of gamers playing simultaneously on Steam or Xbox Live.

And it’s not because these are new platforms: PC gaming network Steam hit its first 1.5 million concurrent users six years after launch; Decentraland currently has less than 1,200 active users and has been open to the public for two-and-a-half years.

We have a long way to go before the metaverse is a $13 trillion opportunity. 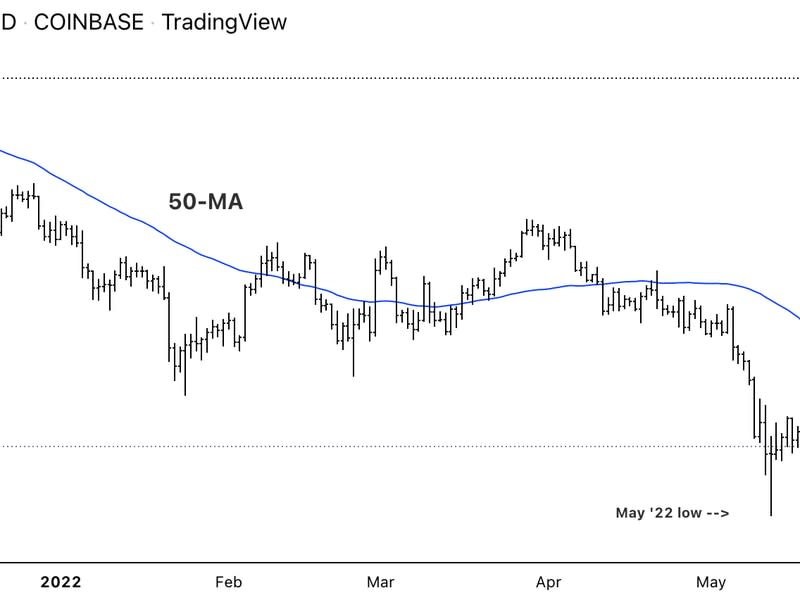 Bitcoin (BTC) remains in a choppy trading range as short-term indicators are neutral. The cryptocurrency could find support at $25,000 and $27,000 as its price continues to stabilize from last month's sell-off.

The relative strength index (RSI) on the daily chart returned to below the 50 neutral mark, indicating weak momentum behind the latest price bounces above $30,000. On the weekly chart, the RSI is the most oversold since March 2020, which preceded a rise in crypto prices.

Still, indicators can remain oversold for several weeks, especially within a price downtrend. That means upside could be limited for BTC, with immediate resistance at the 50-day moving average of $33,371.

CoinDesk's Consensus convention begins on June 9 and will run for three days. You can find an agenda and list of speakers here.

In case you missed it, here is the most recent episode of "First Mover" on CoinDesk TV:

BIS Economists Contend Crypto Can't Fulfill the Role of Money: The nature of permissionless blockchains necessarily leads to “fragmentation of the crypto landscape,” according to the central banking group.

IRA Financial Sues Gemini Over $37M Crypto Heist: The lawsuit corroborates earlier reporting that hackers deployed a police SWAT team as “a ruse to distract IRA employees” on the day of the attack.

Human Rights Leaders Urge Congress to Take 'Open-Minded' View on Bitcoin: Human rights activists have urged Congress to learn about bitcoin and its use in nations suffering conflict and hyperinflation.

New Research Unearths Insights Into Satoshi and Bitcoin’s Early Days: The paper makes no claims about the Bitcoin network today, more than a decade after the end of the period analyzed. But it underscores well-known and longstanding privacy challenges.

Even Giants Started Out Small: Cooperation and the Early Days of Bitcoin: What the new Baylor Bitcoin study really says (and what it really doesn’t) about Satoshi Co.

Today's crypto explainer: How Crypto Can Do Good for the World

Other voices: How ‘Trustless’ Is Bitcoin, Really? (The New York Times)

“Too many lawmakers are rushing to introduce legislation that, in the name of fostering innovation, could legitimize bad actors and bad practices. Just because an industry that pumps millions into the political process claims it is innovative does not mean it deserves its own special rulebook.” (Mark Hays, a policy analyst for Americans for Financial Reform, for CoinDesk) ... "With the dawn of Web 3, there is an opportunity to build a better world for our generation and beyond. We can leverage the properties of Web 3 to design crypto-economic systems that are regenerative: systems that are resilient and sustainable, and align conflicting priorities toward the greater good." (Kevin Owocki, for CoinDesk) ... “I do expect inflation to remain high, although I very much hope that it will be coming down now ... The numbers aren’t locked in, but it’s likely to be higher.” (Janet Yellen before the Senate Finance Committee)