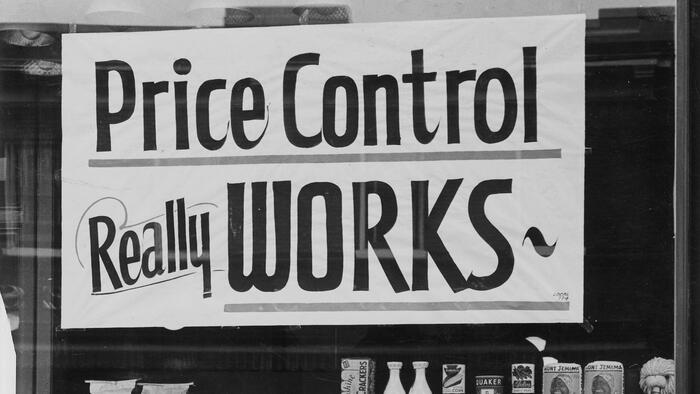 As inflation soars, a growing number of progressives are blaming ‘gouging’, first by ‘Big Oil’ and now by ‘Big Shippers’, pressuring the Biden administration to impose price controls.

The problem is – they never work! And as Christopher Neely, the vice president of The St.Louis Fed, warns, price controls distort signals that are used to allocate scarce resources, leading to the inefficient allocation of goods and services, adding that such controls have significant costs that increase with their duration and breadth. Neely suggests appropriate fiscal and monetary policies can reduce inflation without the costs imposed by price controls.

Simply out, as Neely explains below, price controls have had a very long but not very successful history.

The burst of inflation that followed the COVID-19 crisis and the expansionary policy of international central banks, including the Federal Reserve, has returned the topic of price controls to the news. For example, recent articles have advocated forms of price controls to reduce U.S. inflation and achieve other goals.

This article reexamines price controls, discussing their history, operation and disadvantages, and economists’ views on the policy. It explains why most economists believe broad price controls to be costly and ineffective in most situations.

U.S. PCE Inflation Is at Its Highest since 1982

Price controls are government regulations on wages or prices or their rates of change. Governments can impose such regulations on a broad range of goods and services or, more commonly, on a market for a single good. Governments can either control the rise of prices with price ceilings, such as rent controls, or put a floor under prices with policies such as the minimum wage. The following table shows some examples of common price controls.

The History of Price Controls

Price controls have a long history: The Code of Hammurabi prescribed prices for goods 4,000 years ago, and the Massachusetts and Virginia colonies did likewise 400 years ago.2 Governments have commonly restricted prices during wartime, with all major belligerents instituting broad limits on prices during World War II. Western countries commonly employed broad price controls into the 1970s. The U.S. government last used broad controls in a series of schemes from 1971-74 following the withdrawal of the dollar from the gold standard. Many developing countries control the prices of staples, sometimes combining price controls with subsidies.

The Impact of Price Controls

◾They allocate scarce goods and services to buyers who are most willing and able to pay for them.

◾They signal that a good is valued and that producers can profit by increasing the quantity supplied.

That is, prices allocate scarce resources on both the consumption and production sides. Price controls distort those signals.

The next figure shows a stylized supply-demand graph for a competitive market in which the equilibrium price-quantity pair would be defined by the point at which the supply and demand curves cross, at PE, QE. In the presence of the price ceiling, however, consumers want QD units, while the suppliers are willing to offer only QS units. QD is much greater than QS and the difference is a shortage of the product (Q) at the price ceiling.

Supply and Demand with a Price Ceiling 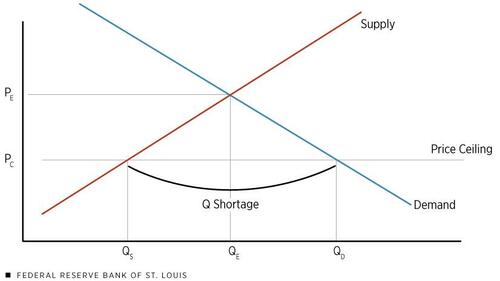 The next figure similarly shows how a price floor, such as a minimum wage, changes the equilibrium price, quantity combination in a competitive market. In this figure, the price floor produces a glut of supply—for example, unemployment in the case of a minimum wage.

Supply and Demand with a Price Floor

Price controls have costs whose severity depends on the broadness of the control and the degree to which it changes the price from the free-market price. The costs include the following:

◾A government bureaucracy and law enforcement must be funded to enforce the controls.

◾Goods and services are allocated inefficiently, both in consumption and production.

◾Widespread evasion of price controls promotes disrespect for the law.

Most of these costs are straightforward, but allocative inefficiency requires some explanation: Because QD is greater than QS in the second figure, there is a shortage of the product, and sellers must figure out how to allocate a limited supply. Perhaps they sell only to longtime customers or customers who also buy other products, or they just limit the quantity that each customer can buy.3 Rent control forces landlords to keep renting to existing tenants at artificially low prices. Such “non-price rationing” is inefficient because some buyers who don’t get the good would be willing to pay more for them. Producers would be willing to increase production and sell to consumers who want to buy at a higher price, but price controls make that illegal.

How Do People and Firms Evade Wage and Price Controls?

When a price ceiling prohibits a desired transaction, the buyer and seller will often evade the price ceiling by transacting in a closely related but unregulated product or by trading illegally in black markets. Similarly, sellers might change a good slightly to prevent it from being subject to the same price limit. The economist Hugh Rockoff notes that the price of clothing has been particularly difficult to control because an article of clothing can be upgraded easily to a higher-priced category by adding inexpensive decoration or reduced in quality by substituting cheaper materials.

The historian Jennifer Klein has documented that the current dependence of the U.S. health care system on employer-provided insurance is a relic of the evasion of wage controls during World War II. During that conflict, defense industries wanted to hire more workers but could not legally raise wages. To make their jobs more attractive, some employers began offering health insurance as a legal fringe benefit.

Price controls prompt greater behavioral changes in the long run. Consider how firms might respond to a higher minimum wage that increases the cost of entry-level labor. In the short run, employers might raise prices and economize on labor. Firms will tend to raise prices, even in a competitive market, because producers must pay higher wages to their employees. People will consume less of the higher-priced products that use entry-level labor intensively. In the longer run, employers will install more capable machines, such as dishwashers or automated cooking machines, to reduce the quantity of entry-level labor they use.

What Do Economists Think about Price Controls?

Economists generally oppose most price controls, believing that they produce costly shortages and gluts. The Chicago Booth School regularly surveys prominent economists on questions of interest, including price controls. Most economists do not believe that 1970s-style price controls could successfully limit U.S. inflation over a 12-month horizon, and many of those economists cite high costs of controls.

Economists do know, however, that price controls can be theoretically beneficial when imposed appropriately on a monopolist or monopsonist, and they do tend to work better in imperfectly competitive markets.4 The economist Hugh Rockoff cautiously suggests a limited role for price controls during some inflation episodes in his book Drastic Measures: A History of Wage and Price Controls in the United States. Rockhoff reported that even the late Milton Friedman, a noted free-market advocate, accepted a limited role for temporary price controls in breaking inflation expectations during a disinflation.

Price controls have had a very long but not very successful history. Although economists accept that there are certain limited circumstances in which price controls can improve outcomes, economic theory and analysis of history show that broad price controls would be costly and of limited effectiveness. Appropriate fiscal and monetary policies can reduce inflation without the costs imposed by price controls.

Or here: to donate by PayPal

Thank you very much and God bless you.

Implementing destructive policy and programs is what this government does best. Don’t confuse incompetence with cleverly disguised evil.

Here's a famous economics book that nobody in the Brandon administration has read: 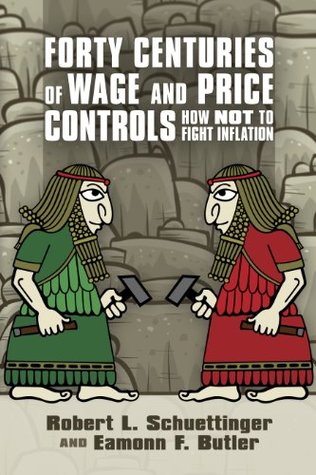 Therefore, Biden will immediately order it.

Pricing controls lead to rationing it is a law of economics. Welcome back Carter and gas lines and rationing here we come.

I think the last President who tried this was Richard Nixon, I think the Biden Administration could be setting the table to implement Price Controls.

If inflation keeps going and their fall election results looking bleak, I would not be surprised if Biden doesn’t pull something like this as a way to showing he’s doing something even if its idiotic.

If inflation keeps going and their fall election results looking bleak, I would not be surprised if Biden doesn’t pull something like this as a way to showing he’s doing something even if its idiotic.

Jim Cramer will say it's the greatest thing in history!

I lived through the Nixon price controls. All it accomplished was the disappearance of product from the stores.

Thanks for posting this blam.

My first thought on reading it reminded me of the wage/price controls imposed by President Nixon in 1971. I was a Sophomore in high school, and didn’t have much income to have any experience. But the convenience store where I was employed had dramatic changes (from supply matters, to significant loss of profit, causing many businesses to collapse) in the course of business. With hindsight, I think that Nixon’s orders were a contributing cause if the horrendous inflation during the Carter administration. The attached article, written in 2011, revisits the 1971 controls, and the meddling of George W. Bush with the nation’s economy through the TARP program. It took Reagan to reverse the 1971 matter. It took Trump to reverse the 2011 matter. The time to reverse is to never start down the path.

Disclaimer: Opinions posted on Free Republic are those of the individual posters and do not necessarily represent the opinion of Free Republic or its management. All materials posted herein are protected by copyright law and the exemption for fair use of copyrighted works.