Energy: Turn Out The Lights, The Green Energy Party Is Over 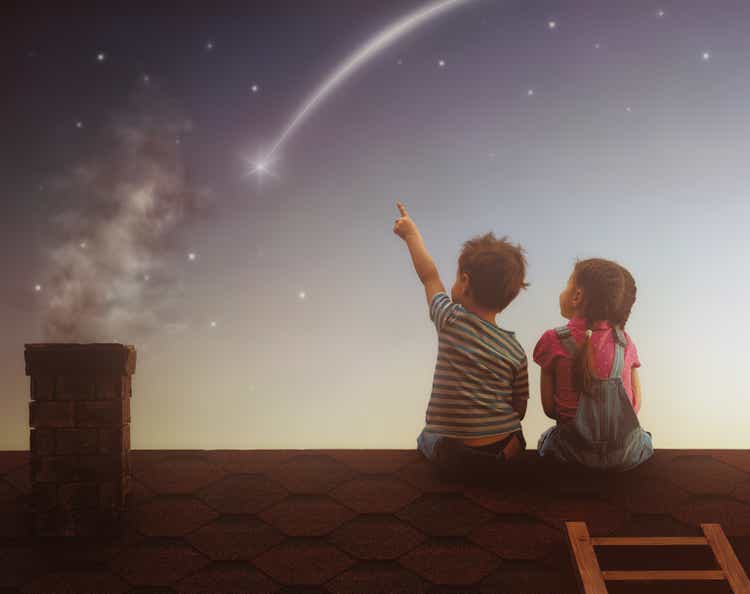 I am going to kick up some dust in this article. A word of caution before reading further. If you are an investor in oil or oil related securities, this article should buck you up, and have you checking your "go-bag" and safety gear. It's been a tough slog the last few weeks, but the central thesis for investing in fossil fuel companies is intact, and will only improve from here.

Conversely, if you're a devotee of the notion that green energy is going to save the world... anytime soon, you may want to have your teddy bear handy. I am going to rub some of the shine... what's left of it anyway, off your illusions.

The age of renewables is on the wane. While solar, wind, and biofuels will always be with us, there are limits to their utility that will keep the bulk of future energy supply reliant upon fossil fuels. These limits are starting to show up in the share price of stocks that feed at the green energy trough. 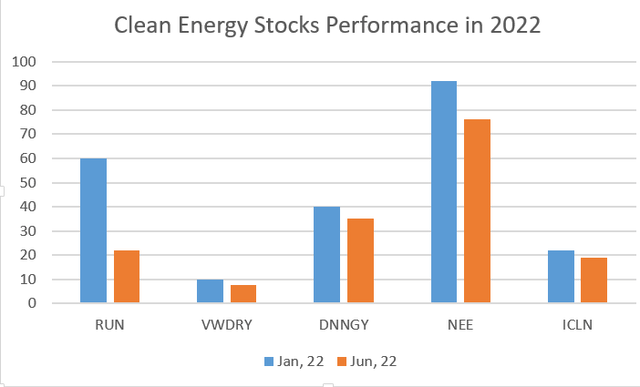 Oil investment has been disincentivized for much of the last decade, and this "transition" has recently reached what I think history will record as a crescendo, or perhaps the crest of a wave. Darren Woods, CEO of Exxon Mobil, (XOM) agrees with me. In an interview with the Financial Times - FT, his comments were characterized as suggesting a renewed focus in fossil fuels -

"Exxon Mobil Corp.’s chief executive predicted a resurgence of investment in fossil fuel production as he blamed soaring oil and gas prices on pressure to move to cleaner energy at a time of relentless demand."

In this article, we will review salient points in support of this content, and then tell you where we are investing, and where we are not investing.

The climate initiatives that have focused so much of the world’s attention, and capital over the last couple of decades, in an attempt to alter the amount of warming the earth will experience as a result of ‘anthropogenic’ sources, are becoming increasingly tattered. In an abrupt change, the world is returning to, only recently shunned, fossil fuels to provide power reliably as the shortages have piled up and prices have spiked.

The G-7 leaders have been meeting in the Bavarian German mountain town of Schloss Elmau this week to discuss matters of global importance. Top of mind are: Climate change, Ukraine, further isolating Russia from global commerce by banning gold exports, and the food and energy security concerns that bedevil the global economy. A Reuters article noted the G-7’s determination to keep pressure on Russia, while Ukraine’s leader, Volodimir Zelensky pressed them to do more. Germany has had more personally pressing business to discuss in this gathering, delays in meeting climate objectives among them. It’s an abrupt reversal of position in an incredibly short period of time.

The Wall Street Journal noted in an opinion piece, that characterized this change of fortune for green energy in Germany.

“As recently as 2020, almost the entire world agreed with the smug German self-assessment that Germany had the world’s most successful economic model, was embarking on the most ambitious—and largely successful—climate initiative in the world, and had perfected a values-based foreign policy that ensured German security and international popularity at extremely low cost, underpinned by cheap Russian gas.”

Germany, one of the most ardent supporters of alternative energy from the Merkel days, has made news recently with moves back-tracking from previous iron-clad support of EU climate goals, with its push to restart coal-fired power plants mothballed in the last couple of years. And more recently to back-track on prohibitions against funding of fossil fuel projects. It has the country seeking relief from climate goals that no longer seem realistic, and is a relative sea change in the space of a few months. Now the overwhelming priority is surviving the winter to come, even if that means a slow-down in efforts to tackle global warming.

Germany is in a bit of a pickle when it comes to near term energy security. Its energy intensive industries-ore smelting and refining, chemical producers and others have been cautioned, as part of the country’s stage-2 plan for mitigating shortfalls, about the specter of gas rationing, as the country grapples with depleted gas reserves, now at 58% of capacity. German law requires these stores be 90% full by December. Winter is just a few short months away, and the country's lead gas supplier, Russian gas giant, Gazprom last week cut deliveries in what some fear is an escalation of the economic war that has ensued following Russia’s invasion of Ukraine. At risk are the supplies needed to heat homes as the temperature begins to drop in a few months.

Long term, the country has recently turned to the U.S for LNG supplies as the emergency has deepened, inking a 20-year deal with Venture Global. As it turns out, Germany is not alone in looking for new capacity.

These are just the latest symptoms of a larger malady beginning to manifest itself on a world that had hoped to wean itself from fossil fuels by the end of this decade. Carbon Free by 2030 is a now fading rallying cry as the world comes to grips with a newly emerging reality. Fossil fuels are still desperately needed to provide energy reliably, and will be for decades. The Economist noted that, “Everywhere you turn there are shortages and fragility.”

How did we get here?

As I documented in an article last year under-investment in upstream energy sources over the last decade by hundreds of billions of dollars, the result of low price signals sent by the market, have depleted reserves to the point there is little if any additional capacity. Anywhere.

Low prices told the oil companies that normally would have searching for new fields, that there was no economic value in this endeavor. Governments and Banks began to withdraw support from the industry cancelling incentives to drill or issuing outright bans, and a denial of capital to sustain the search. Shareholder suits forced the addition of climate-centric board members, in the cases of Chevron (CVX), and XOM. Courts and regulatory agencies around the world found that oil companies must begin to account for broader ESG impacts of their operations and accelerate reductions to meet Scope II, and III goals.

The folly of this abrupt transition to wind and solar, was brought home last year as the wind and solar farms that had been built in the North Sea to substitute for coal and gas all experienced failures that caused the countries involved to wish they traditional fuels to call upon. When new supplies-such as LNG, were found, they came at such a cost the governments heard loudly from their citizenry that the cure for global warming might just be worse than global warming itself. The result was government rebates to consumers driven by higher taxes on producers suspected of making, “Windfall” profits from higher prices.

This brought immediate push back from the industry, notably Harbor Energy, the North Sea’s largest producer. CEO Linda Cook was quoted in a FT article as saying-

“A higher tax burden will make it more challenging for new oil and gas projects to meet investment hurdle rates, meaning fewer projects will be sanctioned. This is at a time when industry is being encouraged to increase domestic UK oil and gas production and support an orderly energy transition,” Cook told the Financial Times.”

It seems government propensity for sending mixed messages to producers is alive and well on this side of the Atlantic as well. In a recent meeting with oil execs, ostensibly to find ways to increase U.S. production of refined products, U.S. Energy Secretary, Jennifer Granholm was quoted in a Wall Street Journal article as saying, “Ms. Granholm acknowledged that refineries are currently running so hard they have little ability to increase production, and told executives the administration didn’t want any of them to slow down a transition to biofuels that has further limited capacity in recent months.”

On either side of the Atlantic there appears to be a disconnect in government circles about how capital is allocated in the private sector. That’s how we got here.

The new search for Energy Security, a global phenomenon

Tight supply conditions seem to have metastasized around the world, particularly for gas. Australia is reactivating coal-fired power plants after weeks of rolling blackouts. France also is looking to refill storage caverns, now only 59% full. The French Prime Minister, Elisabeth Borne, noted in the linked article that it was her goal of filling them to 100% capacity by autumn.

In a stunning turn of events, countries are seeking new supplies of fossil fuels at a time when inventories are below normal. The challenge for them is where are these new supplies going to come from? It is one thing to contract for LNG from a plant that won’t be finished for five years, as in the case of the Venture Global plant. Their newly announced Plaquemines Parish plant has only just reached FID status. Two of the other plants are just in the drawing and permitting stage. Calcasieu Pass, now under construction is scheduled to begin shipping cargoes in mid-2023.

The EIA Gas Storage report released last week shows an inventory build of ~70 BCF in that week. This was likely due to an outage at the Freeport LNG plant from a fire in the week prior that knocked it offline until September. U.S. gas storage levels remain 12.2% under their 5-year average.

Countries may struggle to fill short term demands as limited supplies meet surging new requirements, that only a couple of years ago were expected to be met with renewables.

The world is critically short of ‘on demand’ energy sources thanks to poor planning and some false assumptions about the reliability of renewable energy sources. Earlier this month in an interview with Eric Nuttall of Nine Point Energy Partners, Amrita Sen of Energy Aspects, a well-known energy consultancy, commented that “we are nowhere near demand price destruction due to structural shortages in the market.” She went on to identify the key factors that will keep supplies tight are the very tight labor market in the U.S. and historic demand from Asian economies. Ms. Sen believes oil could hit $180 per bbl before demand tapers off.

What this means for us, as investors in American and Canadian oil and gas equities, is the recent softness is just a blip in a long term bull market for oil, gas and coal. Lack of supply and a large portion of unexpected demand that was projected to go renewables, now seeking fossil fuels, will drive the bull case for many years to come. In that scenario, we think we are nowhere near the top in the upstream energy companies we often discuss.

I've put articles out recently on a number of companies that are 30% cheaper than at the start of the month. If anything I've said here resonates with you, perhaps you might give them a read.

Now roughnecks, grab those go-bags and head toward the heliport. There's good times ahead!