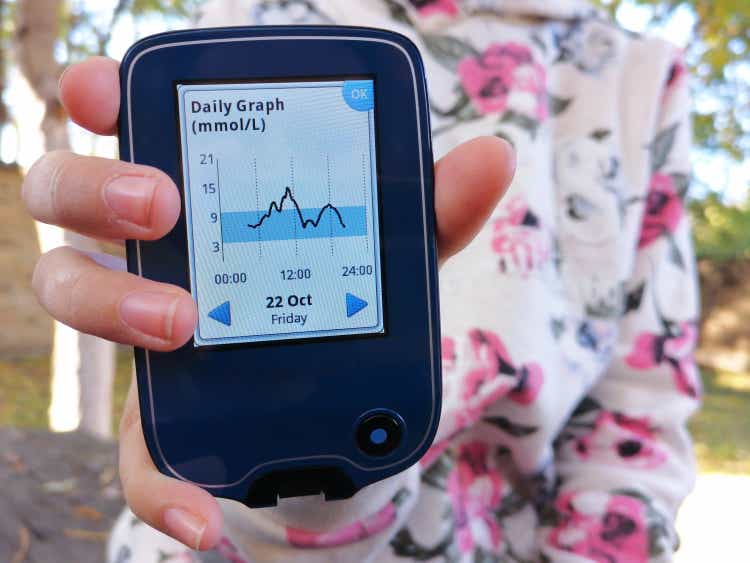 Founded in 1999, DexCom (DXCM) is a leading Medtech player in the continuous glucose monitor (CGM) space. These glucose monitoring devices are used by diabetic patients to control their blood sugar levels. and have proved to be a superior alternative to self-monitoring of blood glucose (or SMBG) or finger-stick measurement in terms of accuracy and convenience. DexCom currently earns the bulk of its revenues from the sale of G6 CGM and its accessories, while the remaining revenues are earned from the sale of predecessor G4 and G5 CGMs.

CGMs are used for real-time measurement of the amount of glucose in the user's bloodstream. It comprises a subcutaneous patch that is placed on the skin and a needle (sensor) that goes inside the skin to measure the user's glucose levels. The electrochemical reading is taken every five minutes by a transmitter and is transmitted to a smartphone or hand-held data receiver.

In the past few years, DexCom has been quite successful in making rapid advances in its diabetes care hardware and software offerings. The company has significant experience in international markets and is a competitive force against bigger players such as Abbott Laboratories (ABT) and Medtronic (MDT) in the CGM space. On January 10, DexCom also preannounced preliminary fourth-quarter results, wherein revenues have surpassed consensus estimates.

Despite the solid fundamentals, the company's share prices are currently down by over 37% from their high of $659.45 on November 17. Since much of this decline can be attributed to the broader selloff in growth stocks triggered by an imminent tightening in monetary policy, this period may prove to be the right time for retail investors to buy the dip in this stock.

The global diabetes-related health expenditures have jumped from $760 billion in 2019 to $966 billion in 2021. The number of diabetic adults in the age group of 20 to 79 is expected to grow from 537 million in 2021 to 783 million in 2045. Even in the U.S., almost one-tenth of the 300 million population is diagnosed with diabetes while one-third are prediabetic or diabetic. The annual expenditure associated with treating diabetes or its complications in the U.S. amounts to almost $300 billion dollars. Hence, we can see that the addressable market for diabetes technology players (CGM and insulin management) is truly huge.

The standard of care for glucose measurement in most countries, the finger-stick measurement method, is an intermittent glucose monitoring method. Most patients usually measure their fasting glucose levels once in the morning. However, blood sugar levels can change dramatically based on diet, exercise, sleep patterns, stress, and a host of other factors. Hence, a point-in-time measurement may not give the correct picture of a patient's blood sugar level throughout the day.

This makes the finger-stick measurement method not ideal for patients on intensive or non-intensive insulin therapy. Although some of the readings may fall in the target glucose range, these patients may be unaware of the time periods when their sugar levels are too low (hypoglycemia) or too high (hyperglycemia). The absence of continuous glucose monitoring and subsequent insulin management can result in a range of serious diabetic complications as well as unnecessary healthcare expenses.

CGMs have a major role to play in controlling the global diabetes pandemic. Many clinical trials have demonstrated that the use of CGMs resulted in around a 1.5% reduction in HBA1C levels (glucose measure). By enabling behavioral changes in patients, CGMs are helping prevent well-controlled diabetic patients from converting into severe diabetics patients requiring hospitalizations. The global CGM market is now expected to grow from $1.8 billion in 2019 to $8.8 billion in 2027. 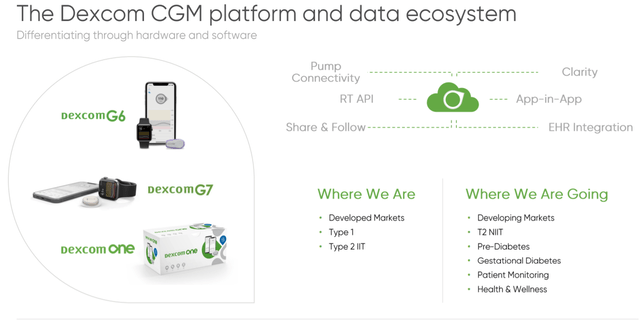 DexCom is well poised to continue being a leader in this market, thanks to its robust CGM platform as well as data ecosystem. The company is also targeting various underpenetrated areas of diabetes management including prediabetes, gestational diabetes, and diabetes prevention segments.

DexCom One and G7 can prove to be major growth drivers.

DexCom has come out with a simpler and cheaper version of its current market-leading G6 CGM called DexCom One, and has made it available on its e-commerce platform as a cash-pay product. 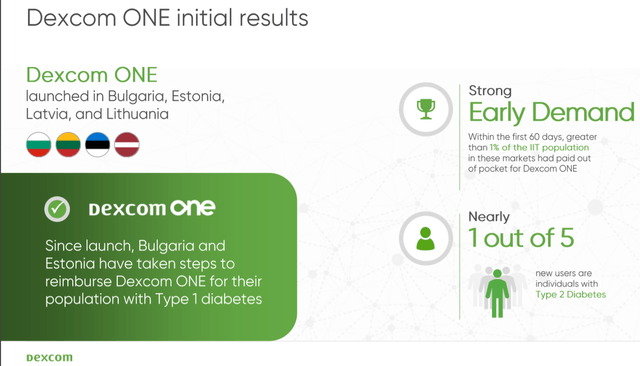 By reducing manufacturing and distribution costs, DexCom aims to use this product to expand access rapidly in price-sensitive developing markets. Already introduced in four Easter European countries, DexCom One managed to penetrate more than 1% of the type 2 diabetes patients who are on intensive insulin therapy in these countries within 60 days of launch. 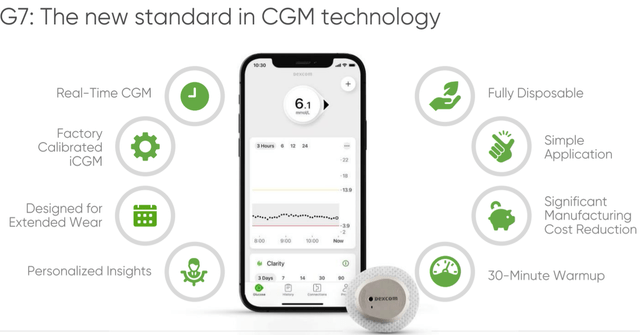 DexCom has also come out with the next-generation G7 CGM, which packs in more insights, higher convenience of use due to 60% smaller size, and better performance as compared to its predecessor G6 CGM.

Currently, under review for a CE mark, DexCom is gearing up for the launch of G7 in Europe. The company already has significant international market experience, which in turn will help it position G7 effectively in Europe despite upcoming competition from Abbott Laboratories' Libre 3 in Europe.

DexCom has reported impressive revenue and margin performance for the past several quarters. 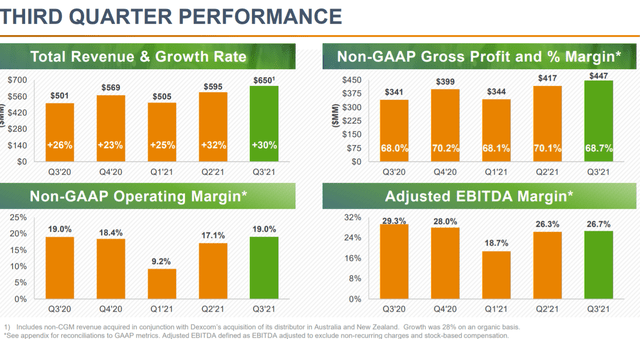 Based on preliminary fourth-quarter results, DexCom's fiscal 2021 revenues are expected to be up 27% year-over-year to $2.45 billion. The company has also added 300,000 new customers in 2021, taking the total global customer count to over 1.25 million.

There is still much growth potential for DexCom in the U.S. market.

While some may see the deceleration in domestic business as a challenge, Piper Sandler analyst Matt O'Brien has discussed with the management and concludes that the factors affecting U.S. business are transient in nature. The resurgence of COVID-19 cases (Delta and Omicron) in the fourth quarter was one of those temporary factors that restricted DexCom's access to primary care physician (or PCP) offices in the fourth quarter.

However, there are many factors that still point to solid growth potential for DexCom in the U.S. market. 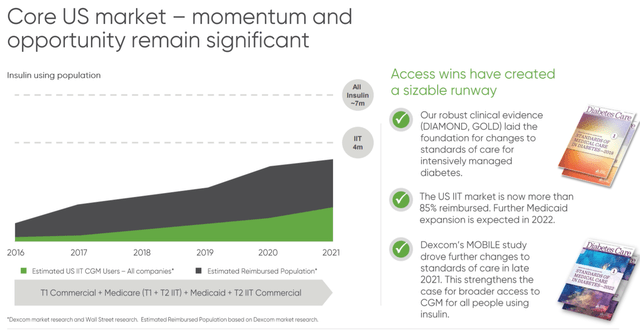 Opportunity for CGMs in U.S.

Robust clinical data from trials such as DIAMOND and GOLD trials have helped establish CGM as a standard of care in diabetes management for patients on intensive insulin therapy. Data from the MOBILE study has further demonstrated the benefit of CGM in type 2 diabetes patients on non-intensive or basal insulin therapy.

All this data has helped play a critical role in improving reimbursement access for CGMs in the U.S. market. Currently, more than 85% of intensive insulin-using patients in the U.S. have payer access to CGM devices. In December 2021, the Centers for Medicare and Medicaid Services (or CMS) announced the expansion of Medicare coverage for CGM. The company also expects additional Medicaid coverage for CGMs in 2022.

DexCom has almost doubled its prescriber coverage in the U.S. in the past 18 months with the help of an expanded sales force team and direct-to-consumer advertising. The company is also targeting 75% of U.S. CGM sales to go through the pharmacy channel by 2022. By shifting away from the durable medical equipment (DME) channel, it would be easier for PCPs to prescribe DexCom's products. A major chunk of type 2 diabetes patients is treated by PCPs. Hence, while this shift towards the pharmacy channel may affect the pricing of CGMs, the resulting revenue impact will be more than offset by higher sales volumes.

There are few risks

Being a Class II medical device (does not have life-threatening implications, hence may not require intensive clinical trials), the regulatory barrier to entry in the CGM space is quite low. The company is already competing with medical technology giants such as Abbott Laboratories and Medtronic in the CGM space. Medtronic's Minimed, although first to enter the market, requires calibrations.

Considering the high growth potential, many other technology players are also vying for the opportunity. For a long time, Apple (AAPL) has been interested in this market and has become the largest customer of Rockley Photonics, a company that is developing a light-based sensor for glucose tracking. Know Labs has also launched a portable medical-grade glucose monitoring device called KnowU, based on the company's Body-Radio Frequency Identification, or Bio-RFID, technology. The technology emits radio waves which are used to measure molecular signatures through the skin. These competitors can usurp a significant market share from DexCom in the coming years.

It is no secret that DexCom is nowhere near to cheap even after the huge share price pullback. 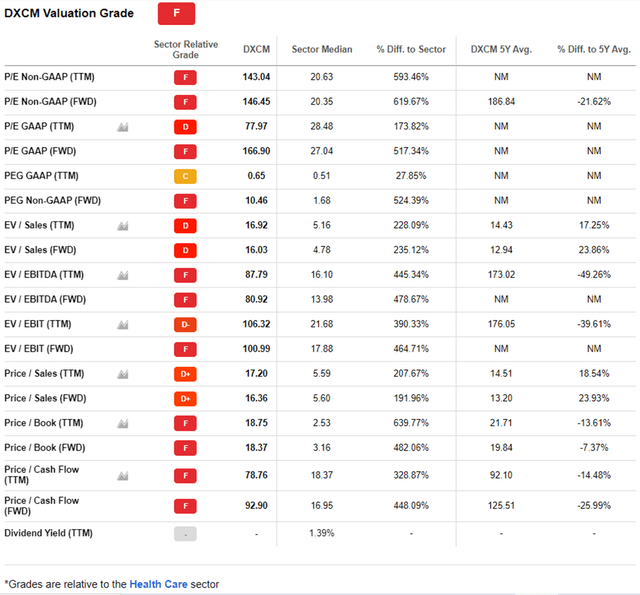 However, DexCom is a leading player in the rapidly growing diabetes care market. The fundamentals of the company are too compelling to ignore.

We see that DexCom is expected to grow its topline at a very healthy rate for the foreseeable future.

Barring an anticipated EPS compression in fiscal 2021, DexCom is also expected to see a very healthy earnings growth rate in the coming years. 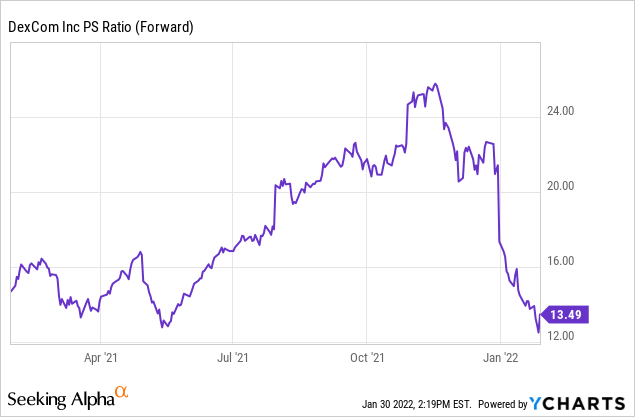 DexCom is currently trading at 13.49 times forward sales. While not a bargain basement, it is one of the lowest valuation levels reached by the company in the past year.

MedTech businesses have always been known to trade at premium valuation levels. Thanks to solid growth catalysts such as G7 and DexCom One, we can reasonably expect the company's multiples to revert back to a 3-year average of 16.44x in 2022.

Based on SeekingAlpha's revenue estimates for fiscal 2022 and the potential multiple expansion to a 3-year average, DexCom's share price seems to have the potential to reach a range of $481-$539 in the next 12 months. This translates into an upward potential of around 18% to 30% based on current share price levels.

There is a lot to like in DexCom's operational and financial performance, despite the recent share price pullback. Most of the challenges seem transient and will most likely resolve in 2022. Hence, based huge and growing size of its addressable markets, DexCom's market-leading position in the CGM space, and improving financials, I believe that this dip may be an attractive entry point to pick up this stock.

I am an MBA in finance and an engineering graduate. I have also completed the CFA certification.I am involved in international trade and have been passionately tracking global equity markets for more than 7 years. I mainly focus on spotting long-term value investments in biotechnology, pharmaceutical, hospital, and medical device sectors. In the last two years, I have also been studying cannabis and hemp sectors.

Disclosure: I/we have no stock, option or similar derivative position in any of the companies mentioned, and no plans to initiate any such positions within the next 72 hours. I wrote this article myself, and it expresses my own opinions. I am not receiving compensation for it (other than from Seeking Alpha). I have no business relationship with any company whose stock is mentioned in this article.