Dear Ikepod, Bring Back The Hemipode

I have a great soft spot for people who try to bring something genuinely new to the world of watches. Especially if it’s an industry outsider, I am all ears. It’s not often that true outsiders can come up with a watch that breaks new ground without creating something conceptual and abstract that is more art than a conventional watch. With his Ikepod brand, Australian product designer Marc Newson created a series of watches that constantly pushed the envelope of watch design. Out of all his creations, the Hemipode is without a doubt the most well-known and most respected. Ever since I first saw one in 2004, I was intrigued and pretty much sold immediately. Almost two decades later, the watch has not lost any of its power.

Most of you will have heard of the name Ikepod. Maybe you were a watch enthusiast when Marc Newson started his adventure with Oliver Ike in the mid-’90s. Or maybe you know the brand because it was revived not too long ago. While it is great to see the Ikepod name return to the scene, the initial concept of what Newson had in mind is no more. The current watches are merely inspired by Newson’s work rather than a continuation of what he started. That’s not a problem, of course, but I’ve always had a special place in my heart for Newson’s wish to innovate and shake up the traditional watch industry. This is why the new Ikepod has never been able to give me the same excitement as the brand did in the late ‘90s and early 2000s. 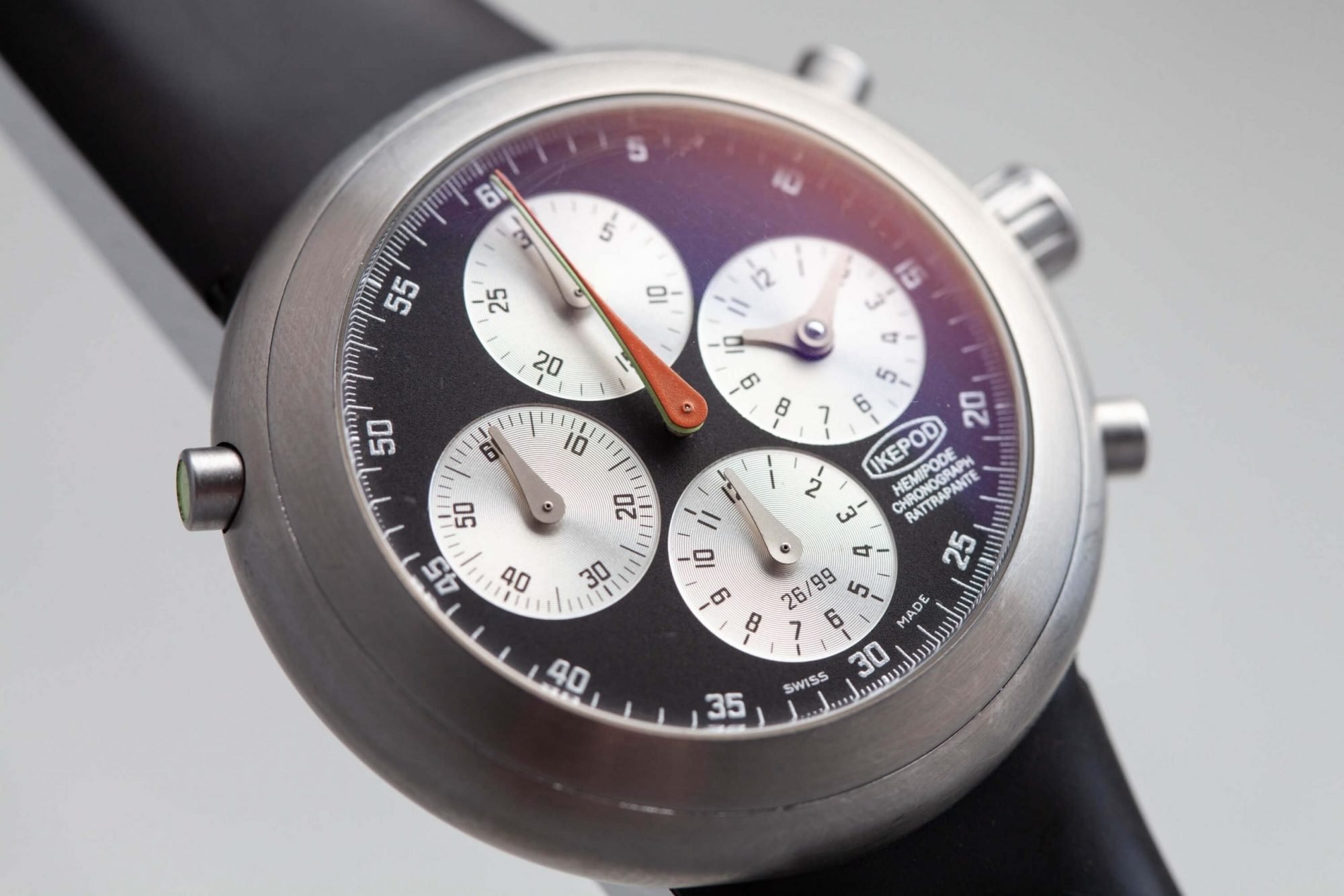 The ultimate evidence of Newson’s unique take on watches came in 1998 with the introduction of the Ikepod Hemipode. It is a special watch that is based on Newson’s quest for ultimate symmetry. But in order to understand where that quest comes from, it’s good to take a look back at the man’s story. Newson was born in Sydney, Australia, which is a long way from both the heart of the luxury watch industry in Switzerland and the well-known design capitals of the world such as New York, London, and Milan. In 1984, he graduated from the Sydney College of the Arts after having studied jewelry and sculpture. In 1986, at the age of 23, he designed his first watch called the Pod. Apparently, Newson made each of the 100 Pod watches himself, allowing him to realize how difficult it was to design, produce, and construct a watch. 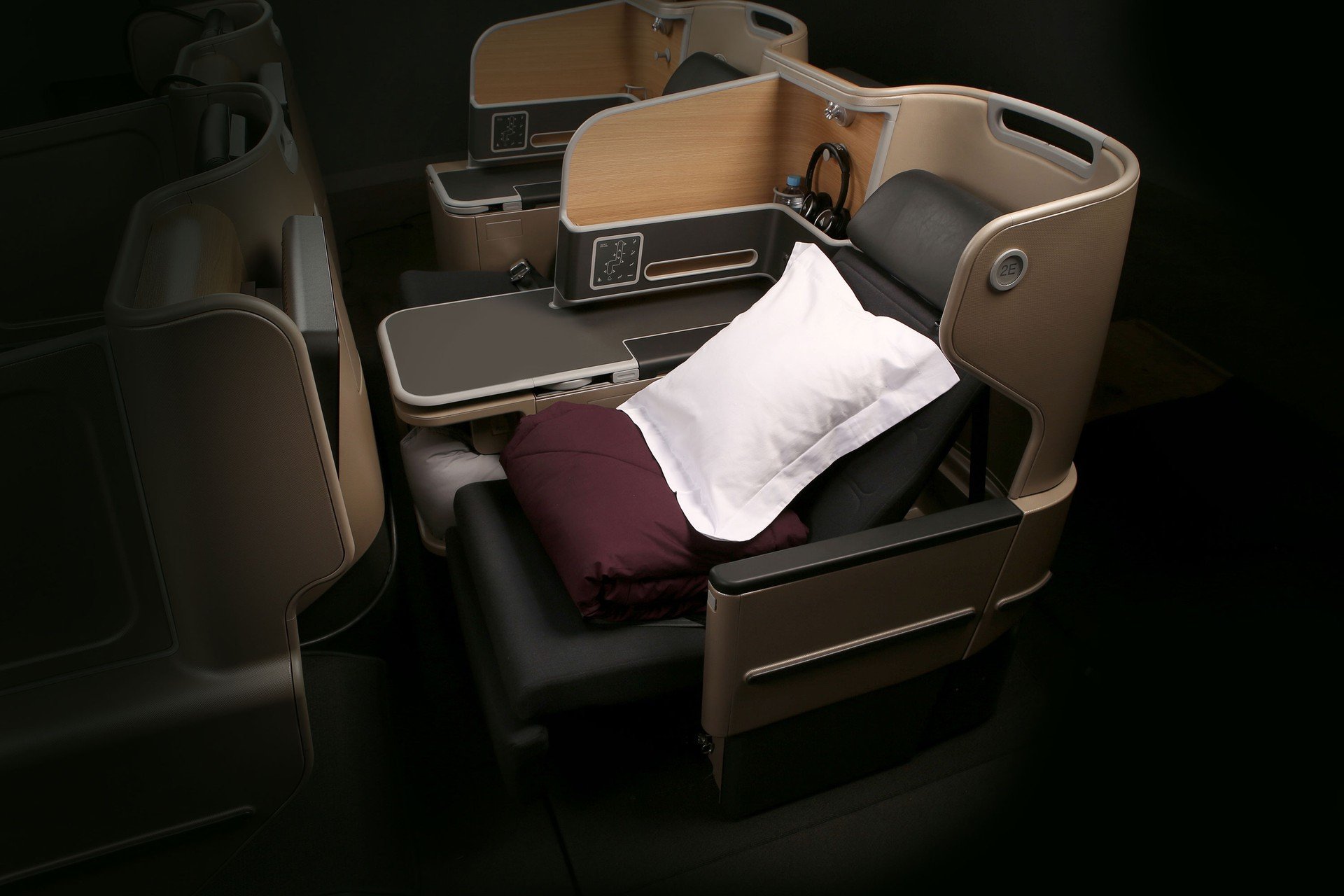 In addition to designing products under his own name, Marc Newson has also been known to collaborate with other brands. Some remarkable collaborations include G-Star, the Australian airline Qantas, Alessi kitchenware, and luggage for the world-famous brand Louis Vuitton. This goes to show that Newson has become a world-famous figure in the realm of product design. His style makes use of smooth geometric lines and tends to have an absence of sharp edges. You can see this in all of his work and it’s also what characterizes his designs for timepieces. 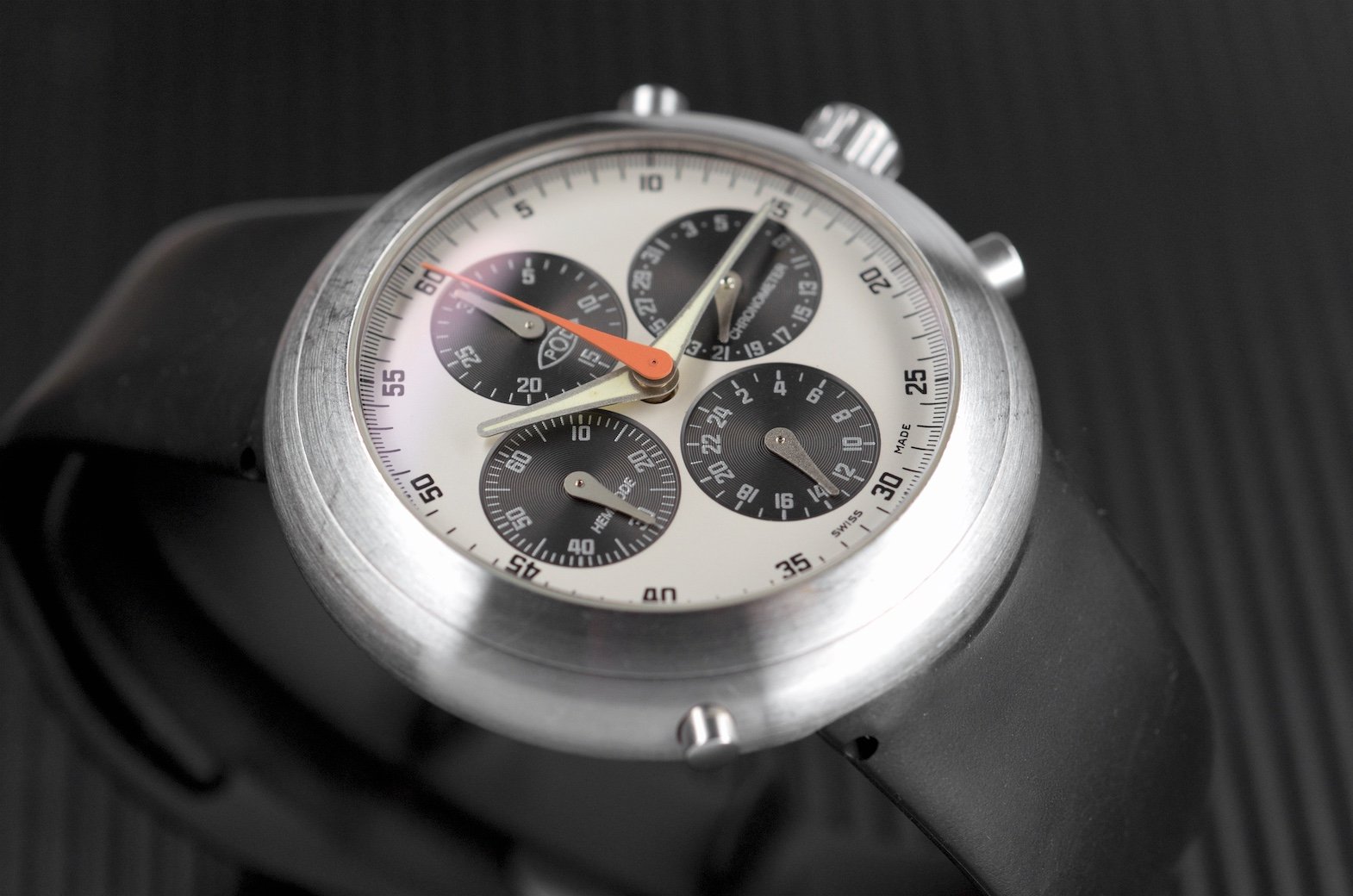 In 1994, Newson co-founded the watch brand Ikepod together with his business partner Oliver Ike. The name Ikepod comes from the last name of Newson’s partner and the first Pod watch that Newson had designed and made in 1986. The name also spoke to Newson’s obsession with the pod and capsule shapes that would become so prevalent in his watch designs. Two years after starting the company, the first watch called the Seaslug was released. Though the watch has become a rarity and you may never get your hands on one, the design itself does not reflect the unique look that has made Newson’s work stand out in the watch industry. 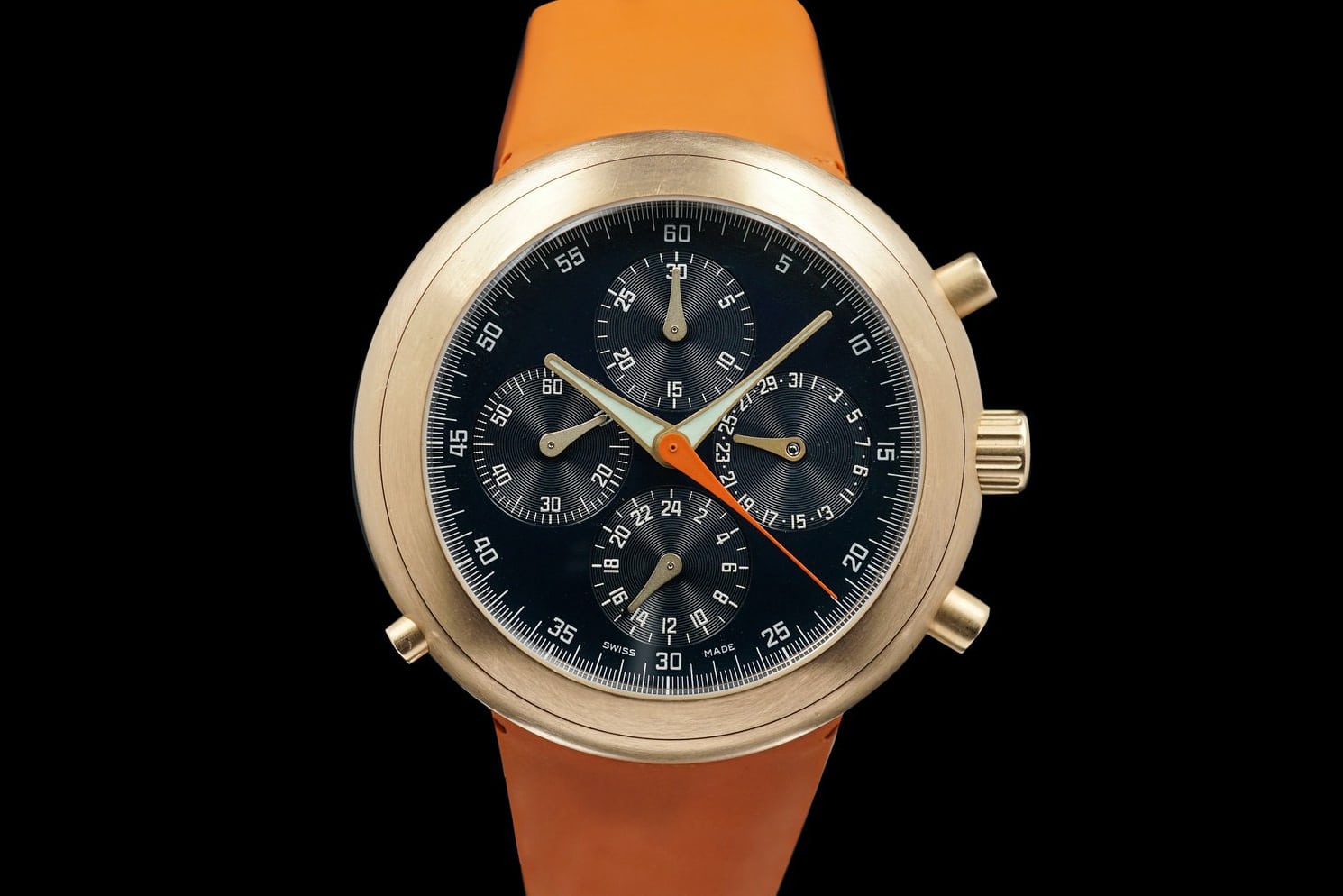 The Ikepod Hemipode — The watch that defined Newson

The first time I saw an Ikepod Hemipode Chronograph up close was around 2003–2004. Fratello team member Gerard used to own the blue and white Cunningham edition of the Hemipode Chronograph. I loved the Ikepod story, one of a product designer trying to implement his own philosophy into watches. As I like designers that challenge the status quo, the Ikepod story greatly resonated with me. On top of that, the Hemipode was and is a great-looking watch! The Hemipode Chronograph was introduced in 1998 and was a perfect display of Newson’s design philosophy. The round 44mm monocoque case design, the integrated rubber bracelet, and the symmetry in the dial — all of it is Newson at his best. The watch was bigger than the majority of watches out on the market then. The integrated rubber bracelet, however, was intended to balance out the case on the wrist perfectly. 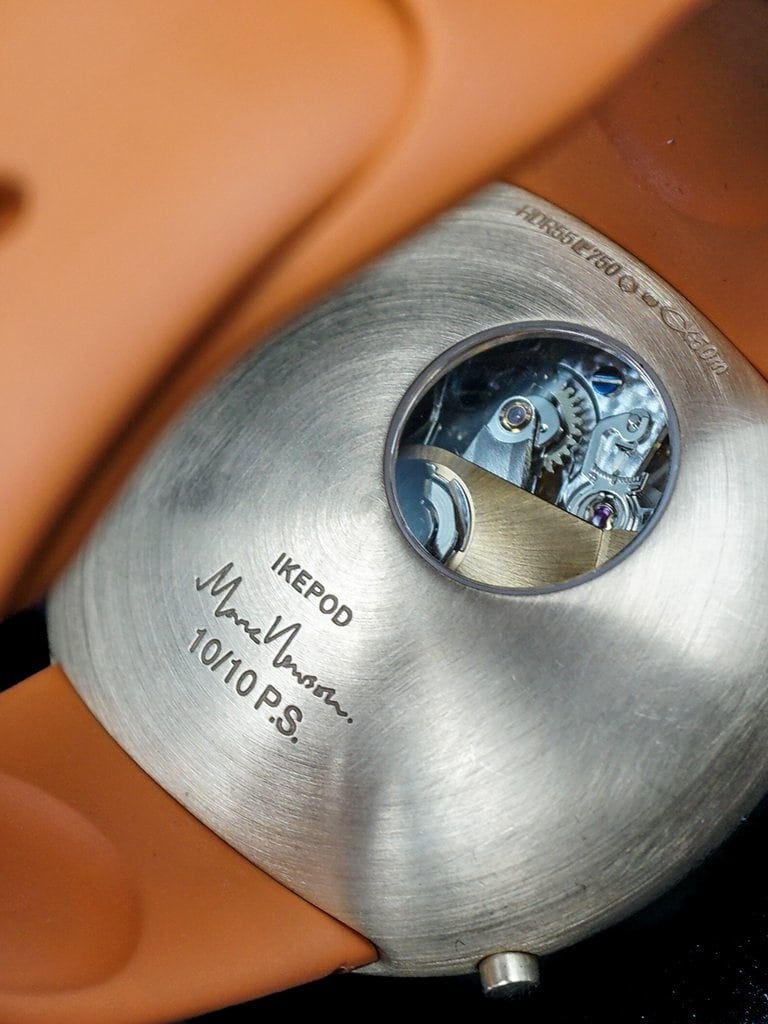 The unique case of the Hemipode is the most distinct feature of the watch. It’s a monocoque design that can be opened from above and also features an off-center window on the back that reveals part of the movement. Newson also perfected the silicone strap he had introduced on the Seaslug because he wanted people to enjoy wearing the 44mm watch. This large size also greatly defined the Hemipode. Back in 1998, a time when most watches were smaller, Newson made a pretty daring move by introducing such a big watch. The combination of the case shape and the material and construction of the strap, which is said to perfectly balance the watch on the wrist, makes the Hemipode a very comfortable watch for its size. 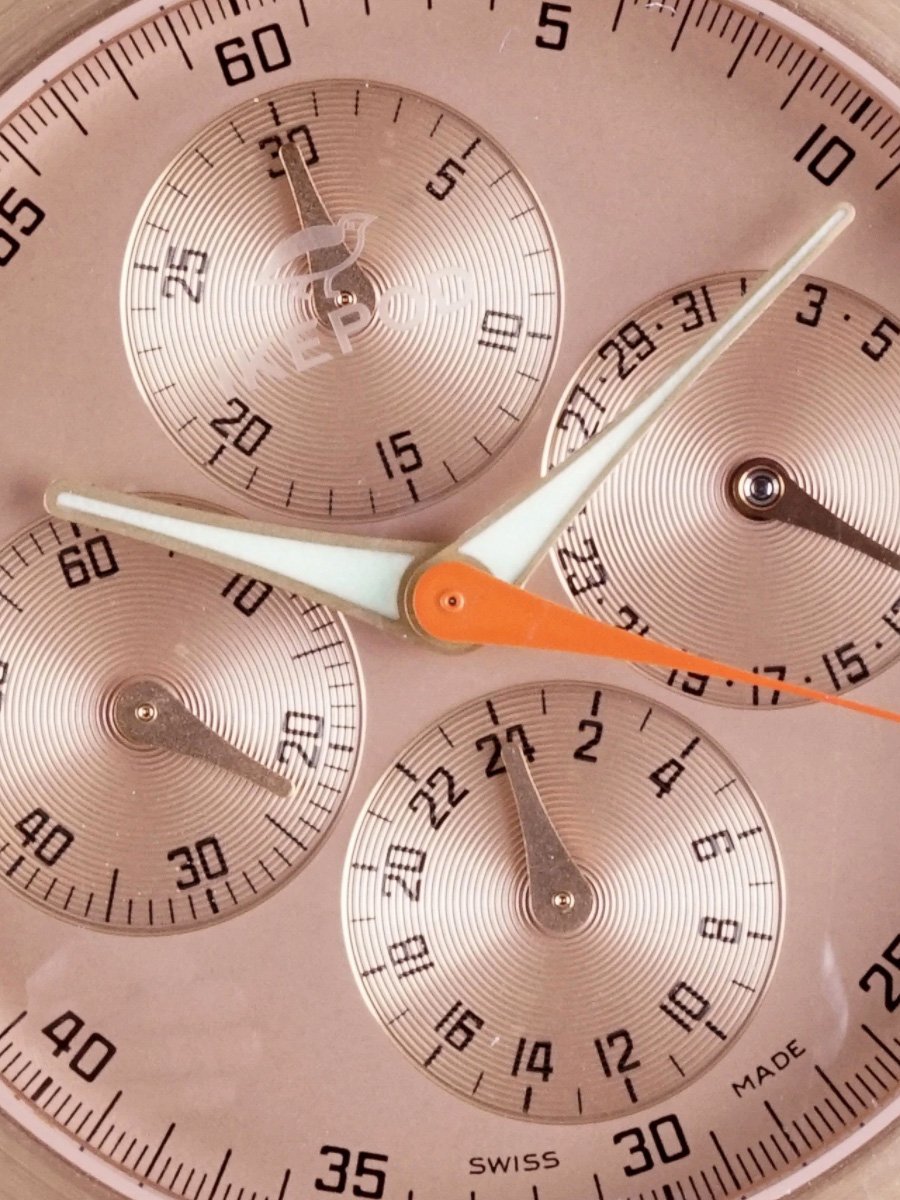 The off-center window on the case back reveals the La Joux-Perret 8206 movement. Essentially, it is a modified version of the well-known Valjoux 7750 caliber. The 7750 is a movement that can be found in many chronograph watches. Newson had a different take on using it, though. Instead of using the 7750 as the base of the watch and building everything else around it, Newson had the movement modified so it could fit the symmetrical design he was aiming for. 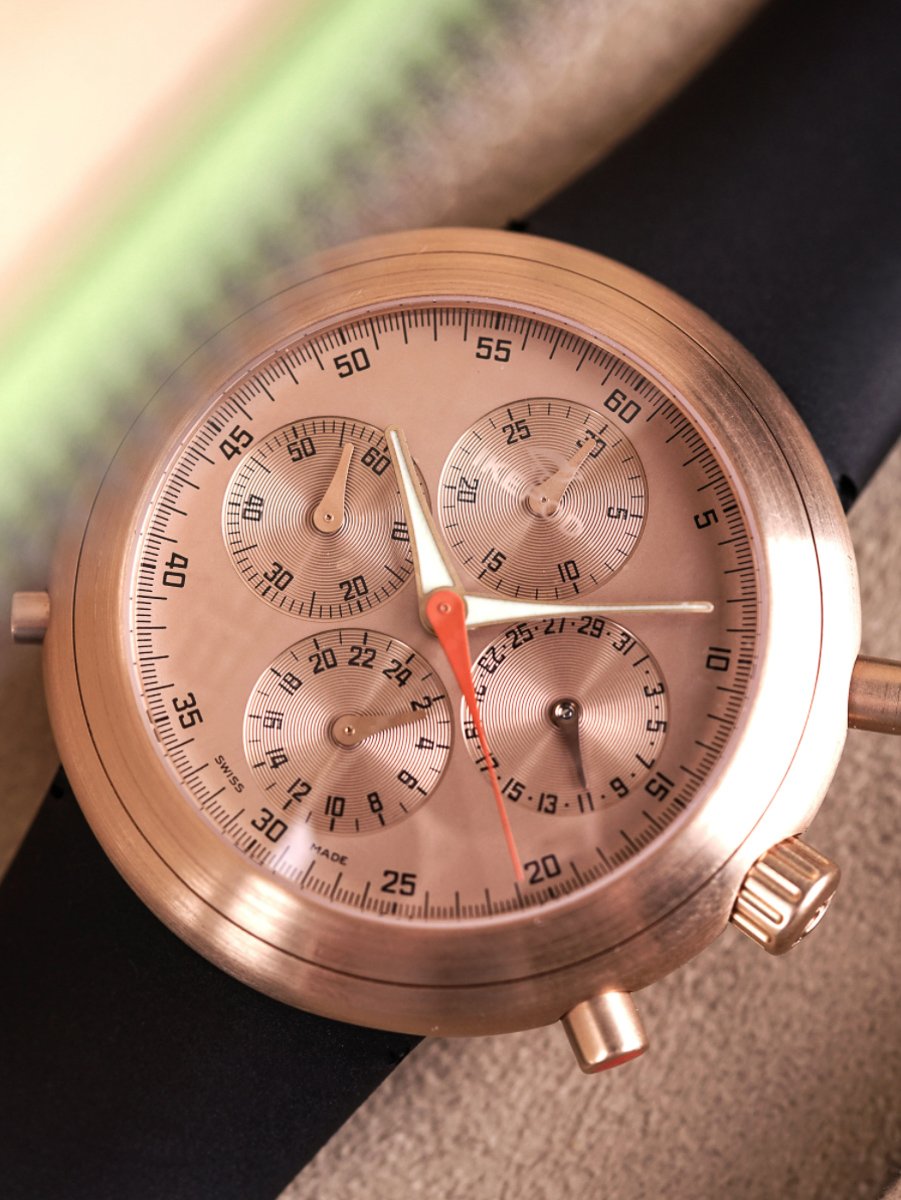 In order to achieve this, the day/date apertures were removed and replaced with a pointer-date register at 3 o’clock. Newson changed it up further with the removal of the chronograph’s 12-hour counter, replacing it with a 24-hour dual-time indicator. This resulted in perfect symmetry on the watch dial, bringing Newson’s watch vision alive. It was a vision that was widely recognized by critics and consumers alike. The result is stunning even to this day. 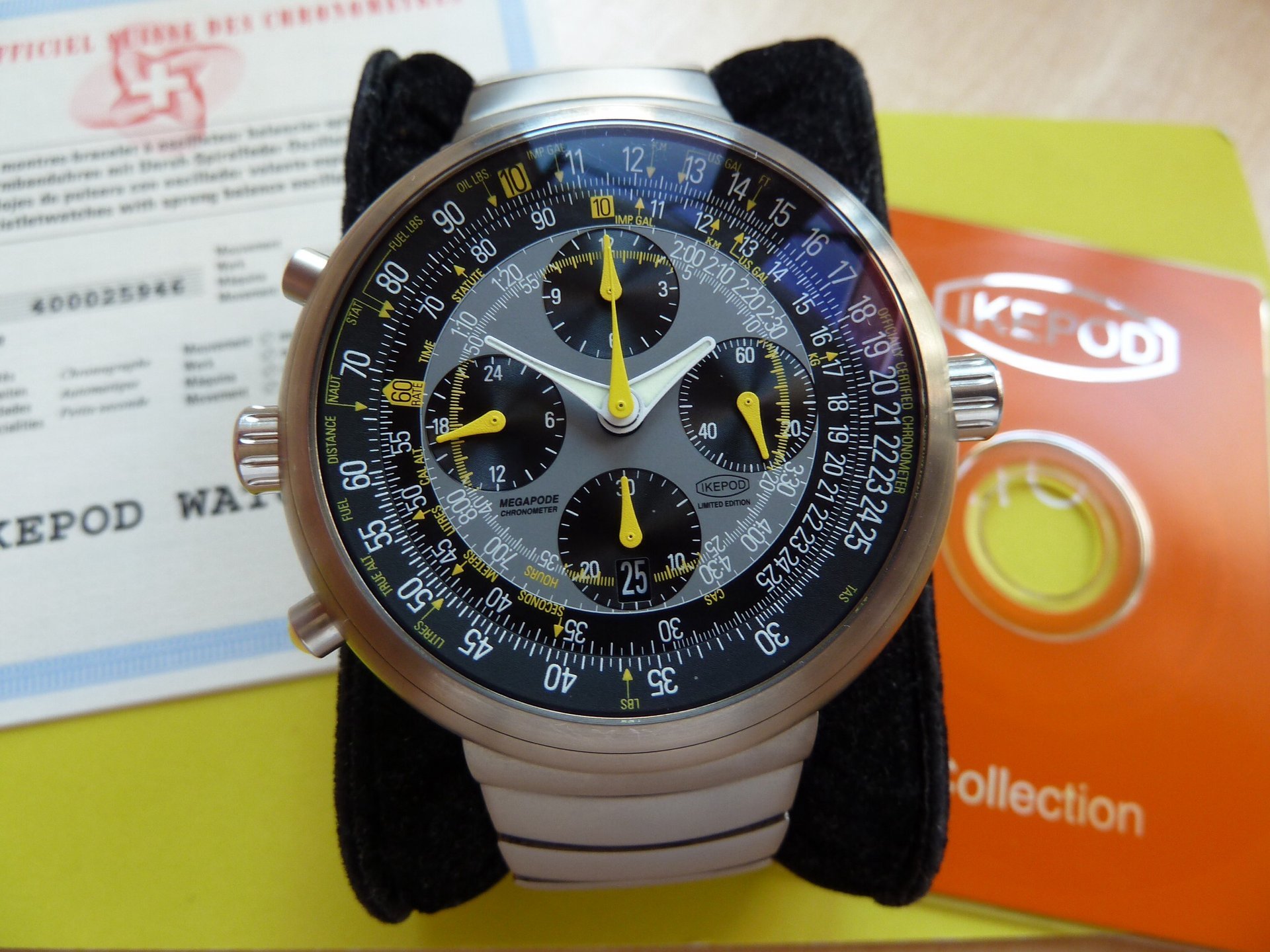 Life after the Hemipode

After the Hemipode, Newson focused on developing the Ikepod Megapode, an even bigger watch measuring 47mm with the same design features as the Hemipode. It’s the most technical watch Newson has designed and probably the least defined by a new visionary design. In 2002, Ikepod introduced a simplified version of the watch called the Megapode Date. It also carries the same characteristics as the Hemipode but is the same size as the Megapode, hence its name. 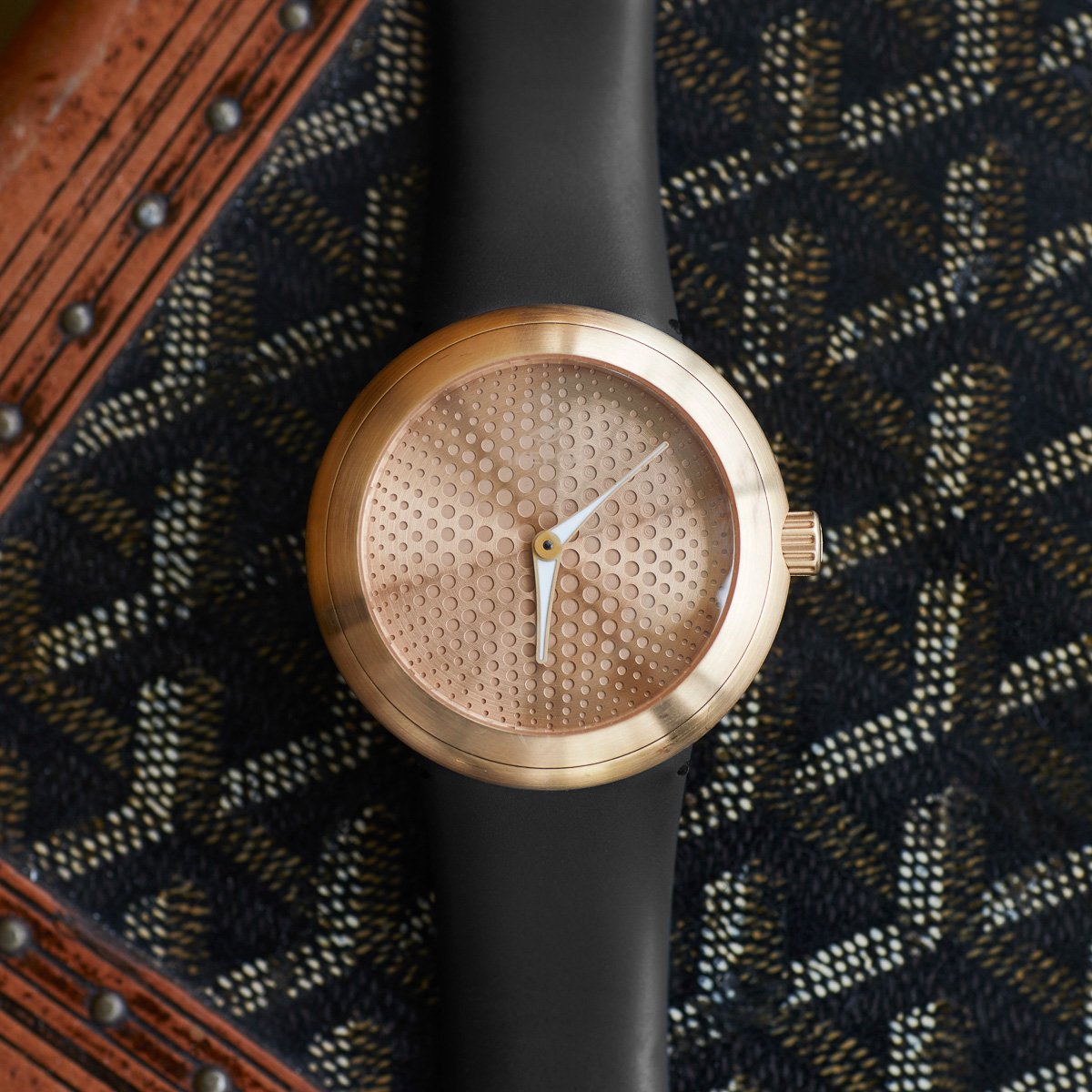 In 2001, Ikepod introduced the Manatee, a watch that stepped away from the circular design the brand was known for. The Manatee is a rectangular watch that has an inner bezel with world time zones marked on it. The watch did not create the buzz that the Hemipode and Megapode did, and it wasn’t until 2006 that Newson and Ikepod introduced a completely new model to the world. The Ikepod Horizon collection uses the familiar shape of the Hemipode and focuses on form over function. The flat dial tricks the eye with its domed, convex look, making the case appear even more three-dimensional. The fact that it was more of a design piece than a functional watch combined with its massively expensive price kept it in the focus of passionate and wealthy collectors. 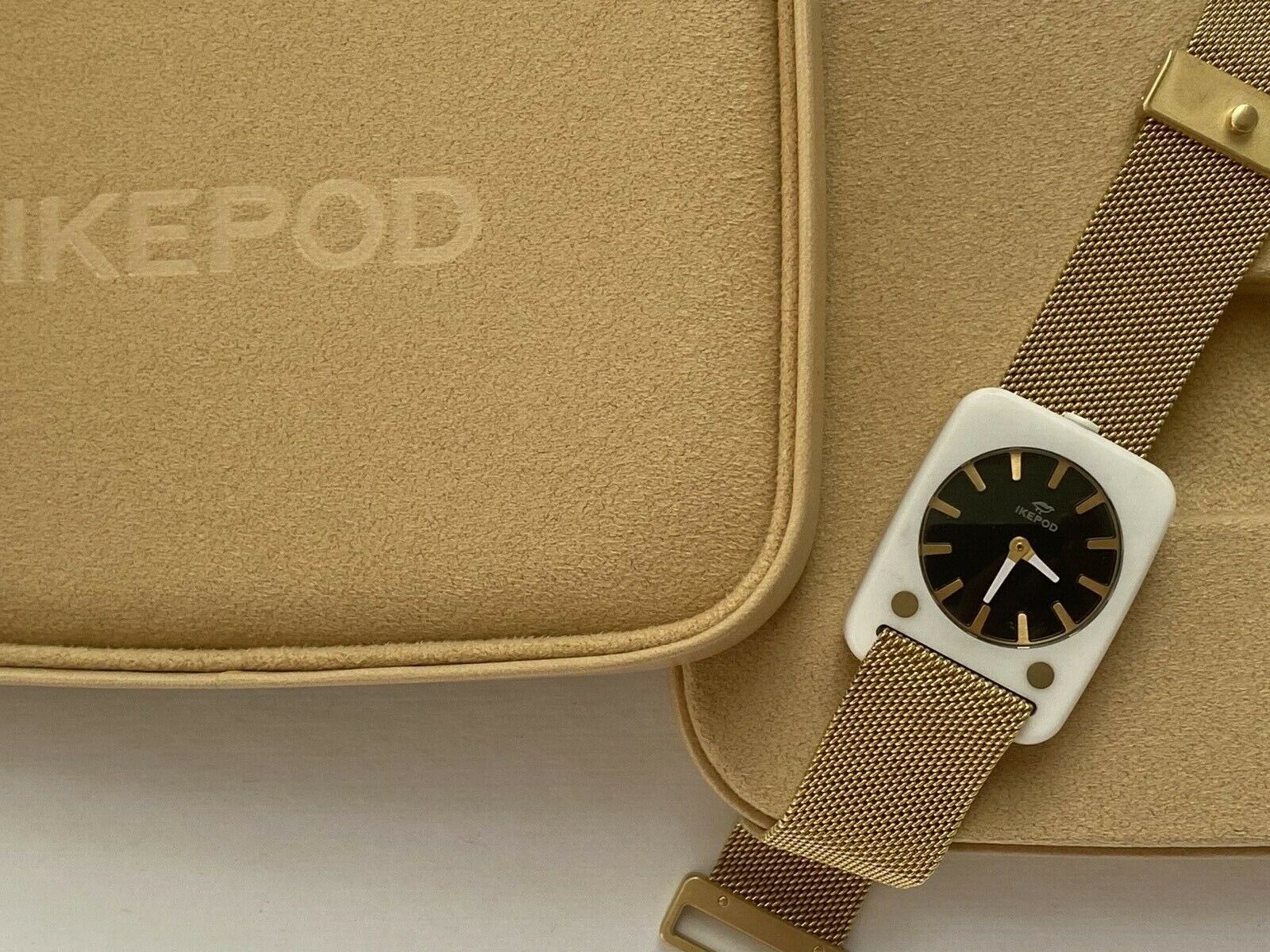 An adventure comes to an end

The last watch that Newson designed for Ikepod was the Solaris. It’s a totally different watch due to its smaller size and use of both sides to show different time zones. The double-faced design was inspired by Andrei Tarkovsky’s film Solaris, which is all about duality. The watch is powered by a quartz movement for accuracy. But just like the Horizon watch, it is technically less intriguing than the Hemipode and Megapode. Nevertheless, the design philosophy is very interesting. Newson tried to create a very simple and elegant dress watch with a unique twist. 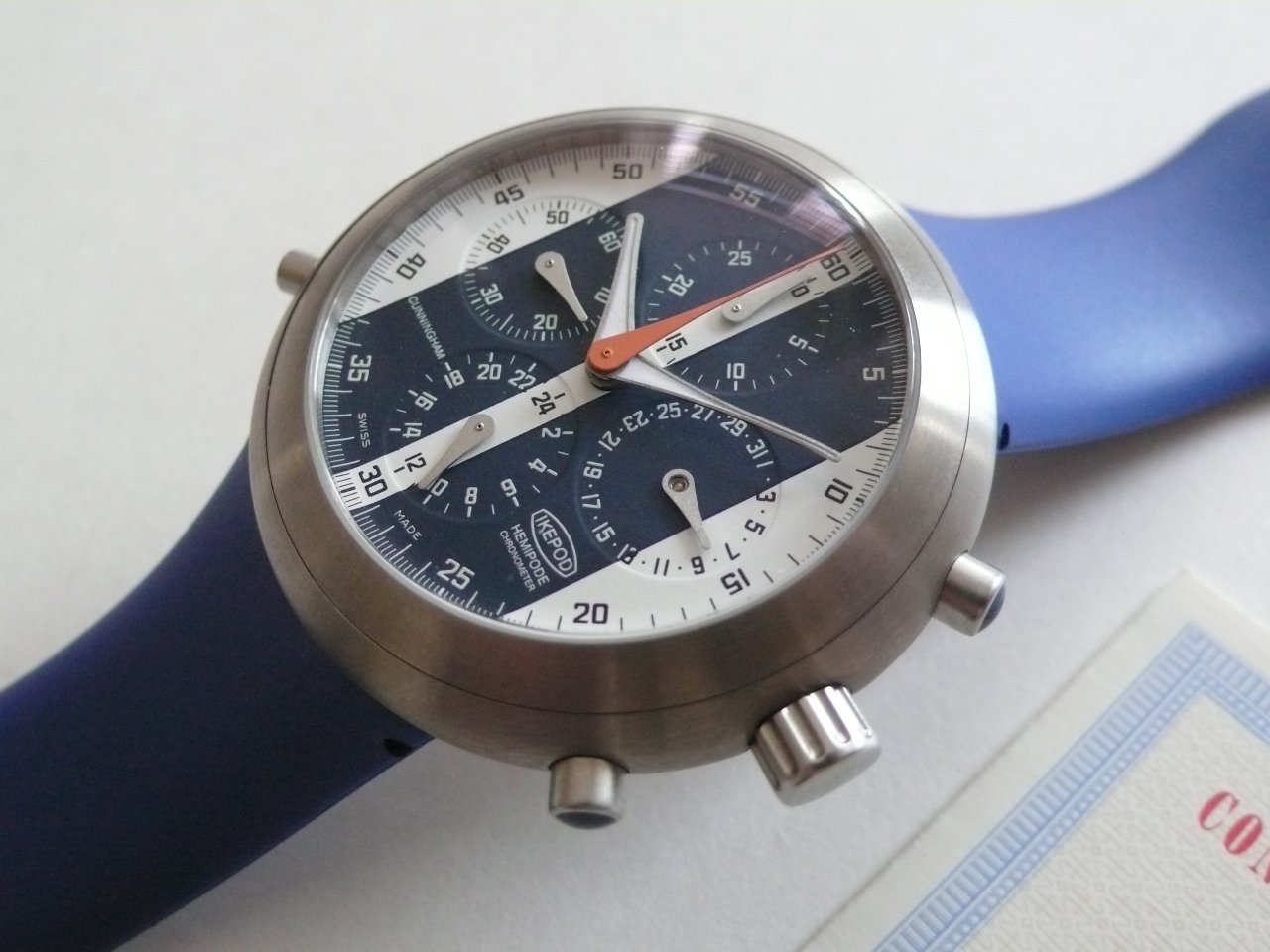 Newson left Ikepod in 2012. After that, he joined Apple and helped to design the Apple Watch to great success. It’s no surprise that he used a lot of the same design features that can be found on different Ikepod watches. From the recognizable shape to the ingenious strap design of the Apple Watch, somehow, you can see the influence of Newson’s work for Ikepod. 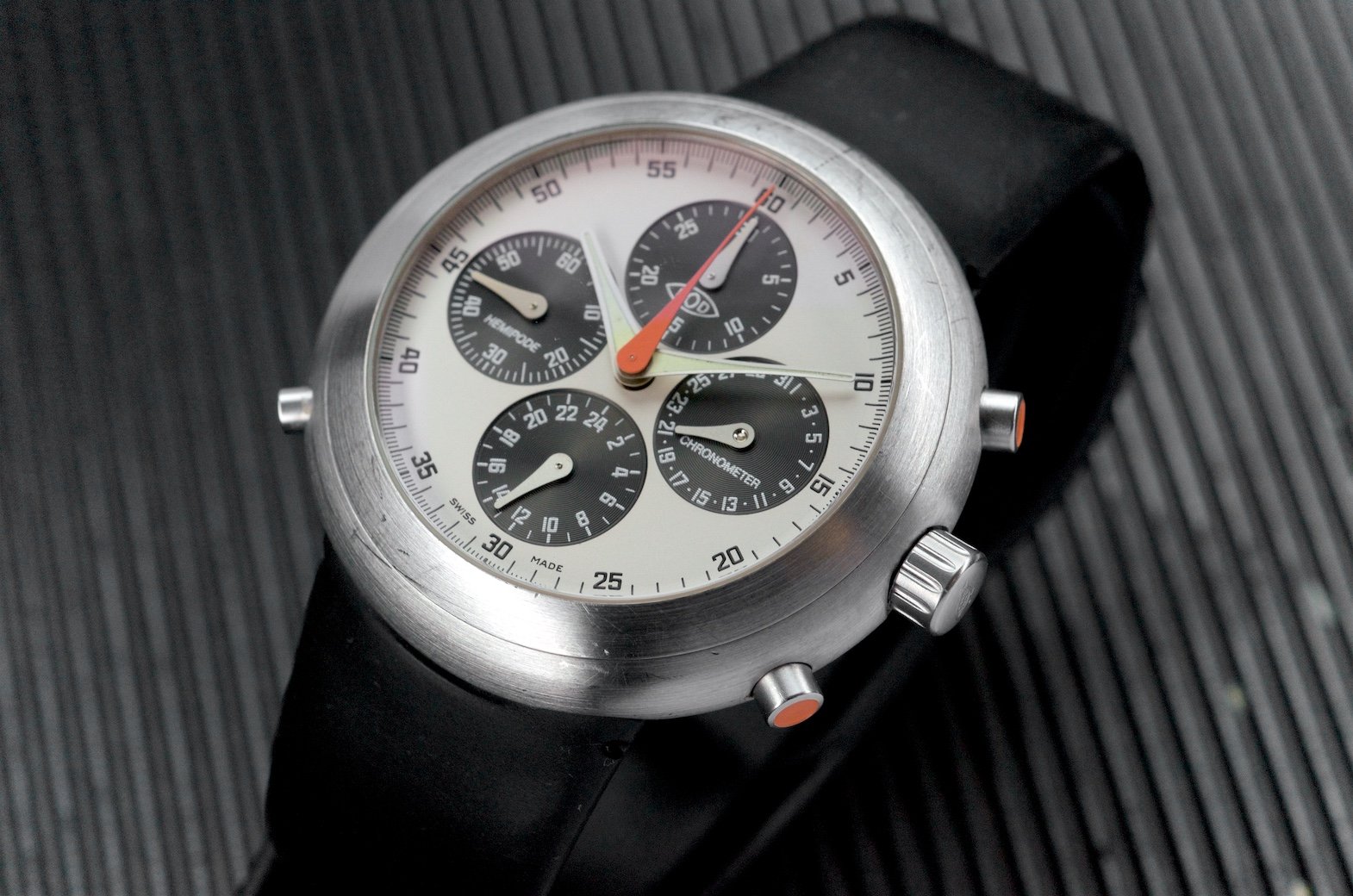 There have been quite a few versions of the Hemipode. The one that I always loved the most is the rose gold version with a dark gray or gold dial. On a dark gray strap, it’s a watch I would love to own. Unfortunately, Gerard also told me about the difficulties with servicing the watch. The tricky monocoque case construction, the modified movement, and the lack of original parts like crowns and pushers make it hard to spend between €10K–12K for one. Now, that’s not much for a gold watch, don’t get me wrong, but the steel version is the more sensible option. The steel version also came with different dial colors. I love the dark gray option, but I definitely would not say no to a panda-dial version as pictured above. 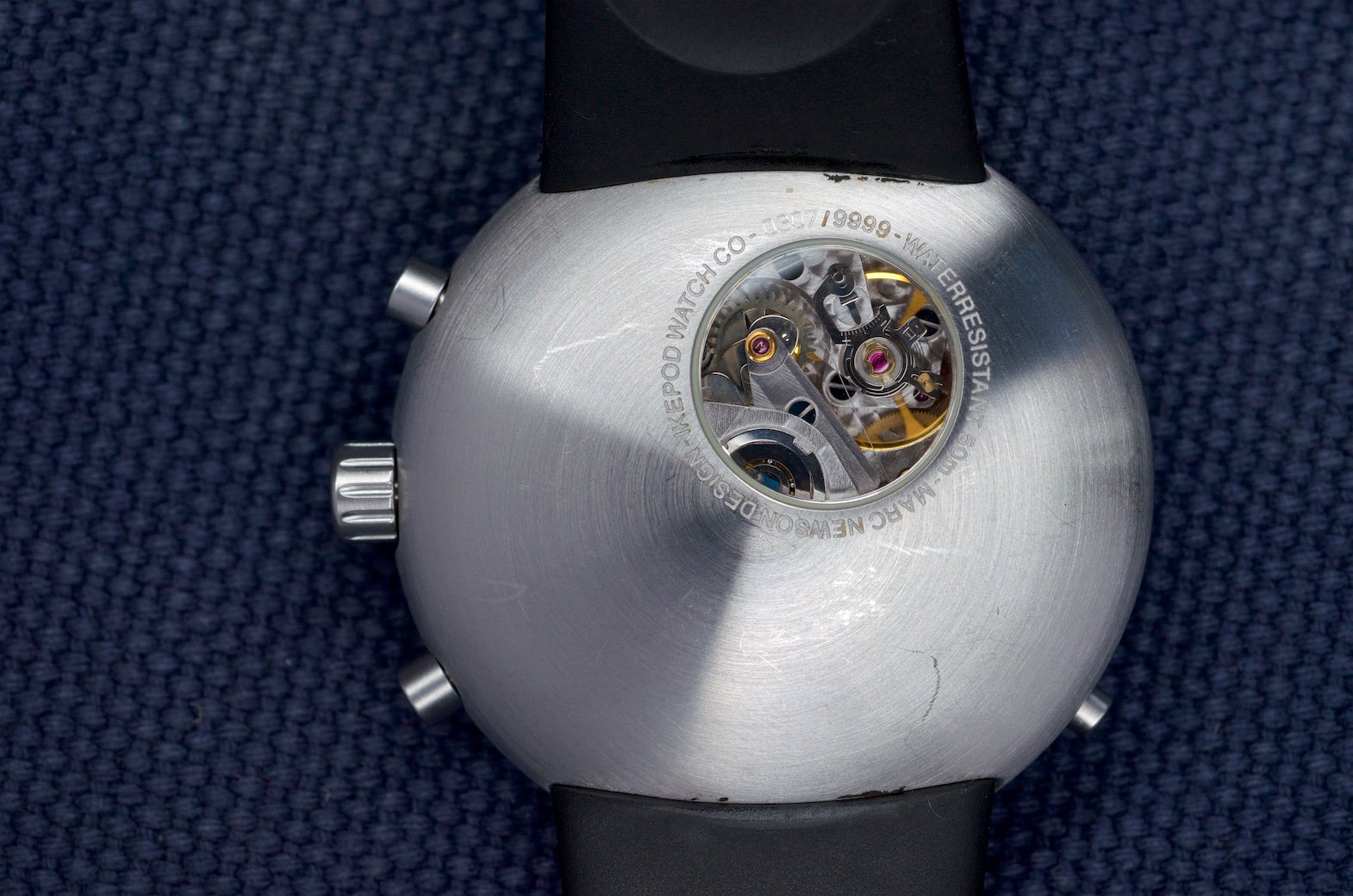 Looking back at Newson’s role as a designer in the conservative world of watches, we can say that he has made his mark. The Ikepod Hemipode is widely recognized as a special watch, combining flawless design with remarkable product features. Even now, you just might be able to get your hands on one for a reasonable price. I know I still want a Hemipode badly. While writing this article, I was reminded of just how much I love it. Additionally, it is the unique vision of a man who is praised as the top designer of his generation, one who created a watch that was bigger, bolder, and weirder than its peers. Almost 25 years later, Newson’s vision proves as relevant as ever. That’s why I would love to see a modern version of the Ikepod Hemipode.

Would anyone else like to see the Hemipode make a return? If so, sound off in the comments section!