On Thursday, Hycroft Mining (NASDAQ:HYMC) filed a form 4 regarding Canadian billionaire Eric Sprott, reporting his five million company share sale, or 21% of his position, at $1.275 via his company 2176423 Ontario Ltd.

The precious metals mining and exploration company operates a mine in Nevada. Sprott is a self-made Canadian billionaire who created his fortune by betting on gold and silver investments.

Get The Full Series in PDF

Get the entire 10-part series on Charlie Munger in PDF. Save it to your desktop, read it on your tablet, or email to your colleagues.

Jim Chanos has a new short target in his sights. Earlier this week, the hedge fund manager disclosed that he is betting against "legacy" data centers that face growing competition from the trio of technology giants, which have previously been their biggest customers. The fund manager, who is best known for his winning bet against Read More

He acquired his stake in March.

Sprott, and cinema operator meme stock AMC Entertainment (NYSE:AMC), both participated in a $56 million private placement at $1.19 per share. Both investors received one five year warrant per share with an issue price of $1.06 per share.

The offering grabbed headlines given its buyers and Hycroft's funding struggle as it carries outsized debt.

Although Sprott missed an opportunity to sell shares above the $2 in late March and early April, he still banked a $410,000 profit on the block sale.

Fintel’s insider analysis below illustrates the losses insiders avoided by holding the shares in the last year. The table shows the significance of the trade, with the $625,000 of avoidable losses and the gain booked equating to an almost $1 million dollar differential.

Finding a qualified financial advisor doesn't have to be hard. SmartAsset's free tool matches you with up to 3 fiduciary financial advisors in your area in 5 minutes. Each advisor has been vetted by SmartAsset and is held to a fiduciary standard to act in your best interests. If you're ready to be matched with local advisors that can help you achieve your financial goals, get started now.

This profit from last week's trade partly offsets the roughly $800,000 losses on his remaining position, based on Wedneday's $1.15 closing price.

The insider's sale, and lack of any insider buys are negative, and Hycroft sports a bearish 25.31 insider accumulation score.

By contrast, the stock's institutional ownership is bullish with an ownership accumulation score of 87.87. The scoring model ranks HYMC in the top 5% of 30,618 included constituents.

To give some context, HYMC has 84 institutions on the register that hold 21.9 million shares.

Some of the largest institutions that remain on the register include Mudrick Capital Management, Marshall Wace, Jane Street Capital and Renaissance Technologies.

The options market for HYMC demonstrates that sentiment remained bullish in the quarter. This has been determined by the significant number of call open interest present in the market relative to put interest. 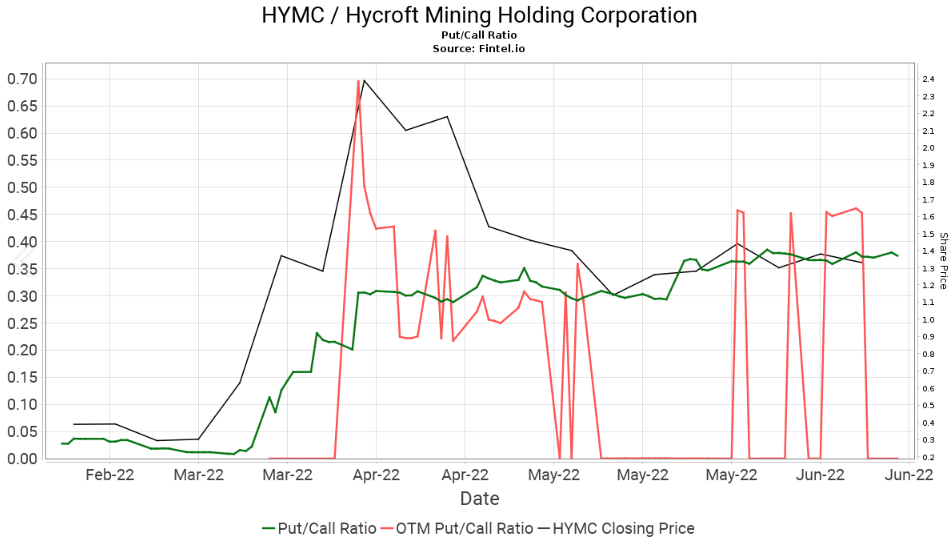 The graph to the right illustrates the options market's demand trend since late Feb. and shows movements throughout the placement period and thereafter.

Analyst Brian Quast from BMO Capital said shortly after the placement that he believed that HYMC did not raise sufficient capital to reenter full-scale production. But, he said that the company had sufficient capital to complete additional testing, drilling and studies required to raise the funds.

He also noted that the equity financing should have satisfied the conditions required to extend debt maturities. BMO remains ‘speculative market perform’ rated on the stock.

HYMC is the 105th most popular investment with retail investors who have linked their portfolios for free to the Fintel platform.