The media are misreporting the real data, and I’ll explain why.

Inflation is properly defined as an expansion of the money supply. However in the 20th century, the federal government began a series of steps to expand the money supply to facilitate more expansive federal spending

(removing the gold standard, removing the gold peg, suppressing interest rates as “stimulus,” printing money directly into the Treasury, etc.). All of these are inflationary, and prices rose far more in the 20th century vs. the largely deflationary 19th century. To cover their tracks, the Fed changed its definition of inflation from meaning an expansion in the money supply to mean rising prices. (Again, previously, the terms were basically synonymous as an expanding money supply ALWAYS means higher prices.)

The CPI as originally conceived was intended to track the cost of maintaining a constant standard of living. In 1980, the Fed altered its tool for calculating inflation such that it was no longer measuring a constant “basket of goods” but rather a “quasi-substitution-based basket of goods”; now, via “hedonics,” the Fed would, for example, use tech improvements to offset rising prices (i.e., if a computer is 25 percent faster than the year prior but the price remained the same, the Fed claimed a 25 percent price drop in generalized … computing power, which enabled them to suppress headline CPI numbers on net).

In 1990, the Fed again evolved the CPI so that these tricks for downplaying “official” inflation were exacerbated. Unfortunately the major media reports whatever Washington feeds them, as if this shapeshifting measuring stick is actually useful to consumers. Thankfully consistent data is available via ShadowStats, where economist John Williams updates inflation data using the Fed’s original CPI calculator. Most of the data is behind a paywall, but you can still see how the official Fed data is now slightly less than

… half of what it would be if it were still using the CPI tool used up until 1980. The first percentages are the official CPI numbers; the percentages on the right are inflation using the original measuring stick. As you can see, this year the real inflation numbers...

Dear FRiends, We need your help to get this FReepathon moving.

Your loyal support makes Free Republic possible. We cannot exist without it.

Or here: to donate by PayPal

Thank you very much and God bless you.

"ShadowStats hasn’t updated for May yet, but if current trends hold — and probably they will only worsen — May’s annualized inflation rate will be just north of 17 percent. As a reminder, the worst of Jimmy Carter’s stagflation era topped out at 14.5 percent. /12

This year we’ll soon see Americans’ losing 20 percent of the value of their paycheck through inflation alone. That’s a horrible shock to Main St., and unfortunately there’s no reason for optimism. The Fed continues suppressing …"

He knows that going on about Putin and pushing the 1/6 Kangaroo Kommission and calling for the banning of guns, those things will save the 2022 Midterm Elections! He cannot lose. He’ll pick up 20 more Democrat Senate seats and at least 100 more Democrat House seats! 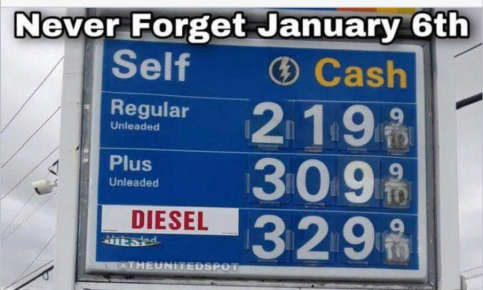 Aye that. But don't lose sight that Congress 100% owns the money supply, the presidency (can impeach and remove), spending, budget, and all the agencies.

Congress made this mess, Congress intends this mess, the only thing Congress is averse to is accountability. "Not our fault. Biden." Congress lies as much as the press.

Congress ran this country into the ground, starting in earnest in the 1970's. They made out, like the bandits they are. Corrupt to the core.

Shadow Stats has always been more ‘spot on’ than the corruptocrats in Washington, DC...

I think the inflation rate will hit 33 percent then hold with prices stabilizing 33 percent higher than 2020.The dollar and stock markets will have shrunk in value to 66 percent of what it was in 2020 and there will be a very bad depression, perhaps even leading to a catastrophic split up of our nation. Good people will have to band together and fight some ‘icky fights” to hold onto property, food and to one another. You want to be in the more freedom loving conservative parts or regions of the broken countrythe co; tiberal sections will become like miniNorth Korea’s or ungovernable warlord regions. Control of nukes will be an issue. It might get so bad that many municipalities can’t collect property taxes from so many people who are out of work because the municipalities will have no financial means to seize properties as the local courts are non working and will have no way to pay law enforcement. What little LEO remains will have no stomach to face down mobs or property owners armed to the teeth.

Yup I’ve gone there...I’ve looked at the whirlwind the elites have unleashed but they will have no assurance that they won’t be wiped out along with everything else. Starving people will be in no mood to listen to platitudes about “saving mother Earth” from fat and fatuous woke people.

there will be a very bad depression, perhaps even leading to a catastrophic split up of our nation

The CPI as originally conceived was intended to track the cost of maintaining a constant standard of living. In 1980, the Fed altered its tool for calculating inflation such that it was no longer measuring a constant “basket of goods” but rather a “quasi-substitution-based basket of goods”; now, via “hedonics,” the Fed would, for example, use tech improvements to offset rising prices (i.e., if a computer is 25 percent faster than the year prior but the price remained the same, the Fed claimed a 25 percent price drop in generalized … computing power, which enabled them to suppress headline CPI numbers on net).

FedGov has been playing games with the statistics for decades to cover a declining standard of living and the rise of a debt-based economy. The game, much like the game Bernie Madoff played with his investors, eventually collapses.

Work on your picture formatting. I can’t read shit now since the pic is quadruple the proper size…

Tim’s hard work and passion have resulted in one extraordinary life. Green Beret, UFC Fighter, and Television Host are all among his career highlights, but perhaps not as personally meaningful as Husband, Father, and Patriot. Click below to learn more about Tim’s life and journey.

We had pinto beans and rice last night. Pinto beans were flavored with a 30 cent hunk of smoked pork neck.

Great Northern beans flavored with chunks of ham and corn bread on the side will be an upcoming meal.

A lot of us were saying that ACTUAL inflation is at around 20% for a while.

Moreover, the problem the fed has is that if they raise the interest rate way to high-and they should be at around 9% now, they will have altered the federal budget. If they do that, at that time, the highest outlay for the budget will be the interest payment on the debt.

The Reset is real and working according to plan…

Disclaimer: Opinions posted on Free Republic are those of the individual posters and do not necessarily represent the opinion of Free Republic or its management. All materials posted herein are protected by copyright law and the exemption for fair use of copyrighted works.